Kia Niro EV first drive: one of the most important EVs to hit the market

For a whole day this week, I had the chance to test drive the Niro EV, Kia’s next-generation electric vehicle after the Soul EV. I came out of that day thinking that it is one of the most important EVs to hit the market.

Here’s why in my first drive review of the Kia Niro EV:

The best way I can describe the Niro EV is “a well-packaged crossover.” There’s nothing in this segment that really appeals to me in terms of design and the Niro EV is no exception.

That said, I understand that it’s a segment that is more about a balance of size and utility than style and based on that, I think Kia succeeded with the design of the Niro EV.

Several automakers are calling vehicles “crossover” when I would actually refer to them as compact cars – looking at you Chevy with the Bolt EV.

In the case of the Niro EV, it’s just big enough that this weird appellation actually makes sense.

The form factor is also interesting with proportions that I would argue almost make it look like an SUV under some angles. 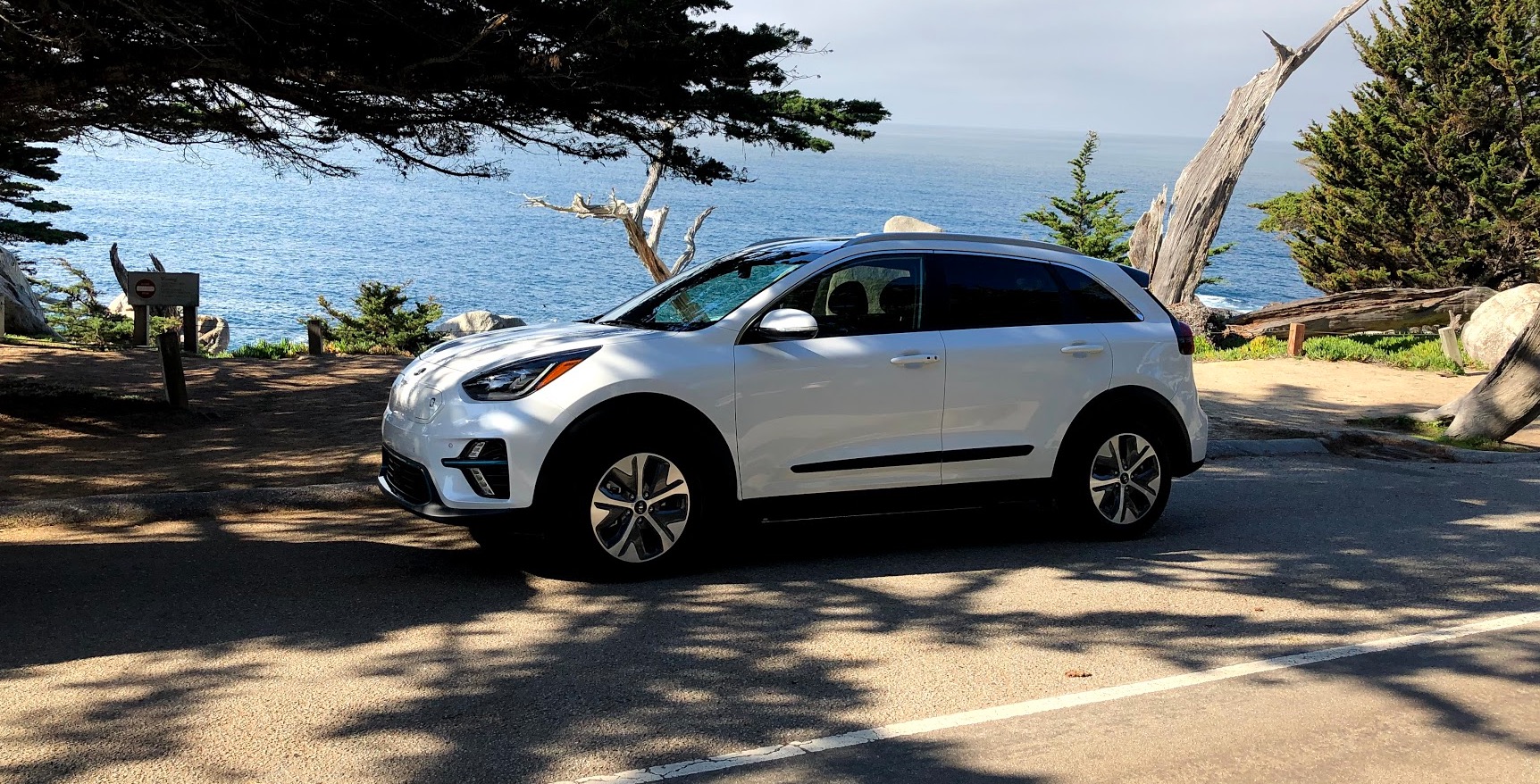 I feel like slightly larger wheels would go a long way in making the vehicle look better, but then you would reduce one of the vehicle’s biggest advantages, its efficiency – more on that later.

One of my biggest issues with the Niro EV’s design is the charge port. It’s located in the front fake-grille of the electric vehicle. 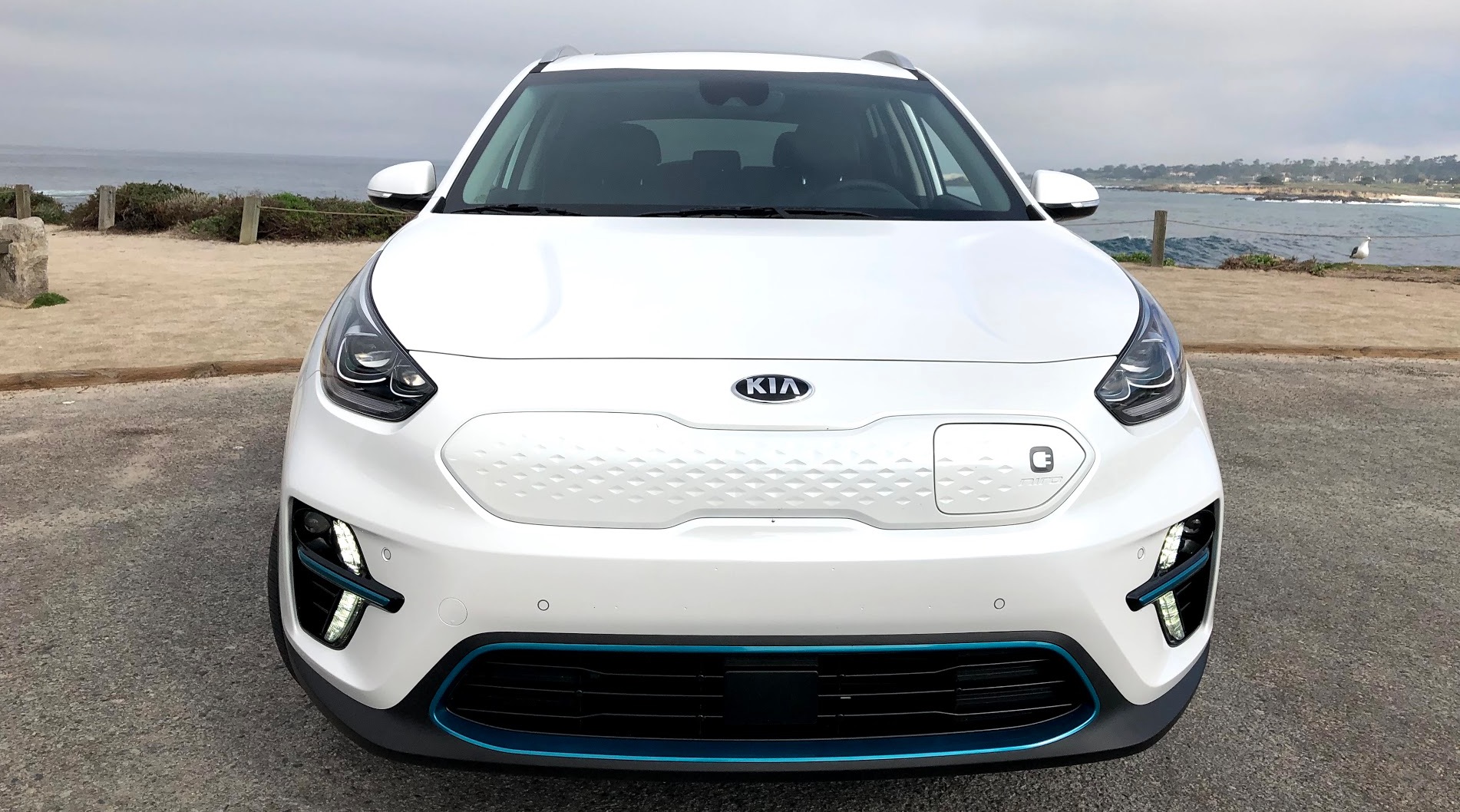 A front-fascia is always symmetrical and this is not. I am sure it’s not going to be a big deal for most people but it bugs me a lot for some reason. It’s particularly weird when you consider the PHEV version, which needs both a charge port and a gas tank, doesn’t have its port in the front.

It also forces people to park at charging stations front first. Some people like that and others prefer to back in.

As for the interior, I like the all-black one that we got, but it was the premium version to be fair. 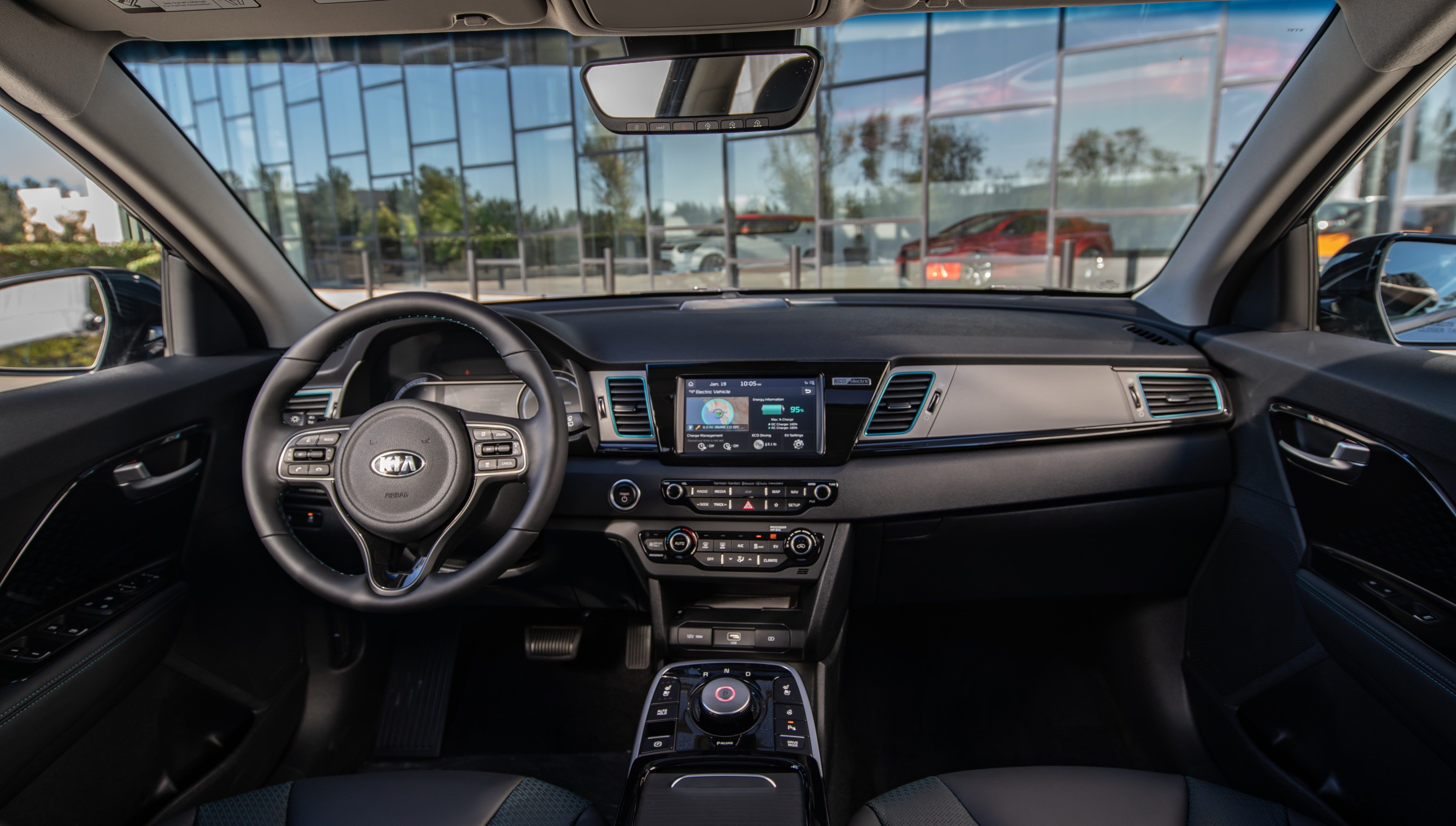 The front seats and cabin are big enough to accommodate a tall driver and passenger and the backseat is decent for most adults.

The user interface is not great, but we ended up mostly using Apple CarPlay.

As for cargo, it’s nothing crazy, but it’s big enough for day-to-day needs even with the backseat: 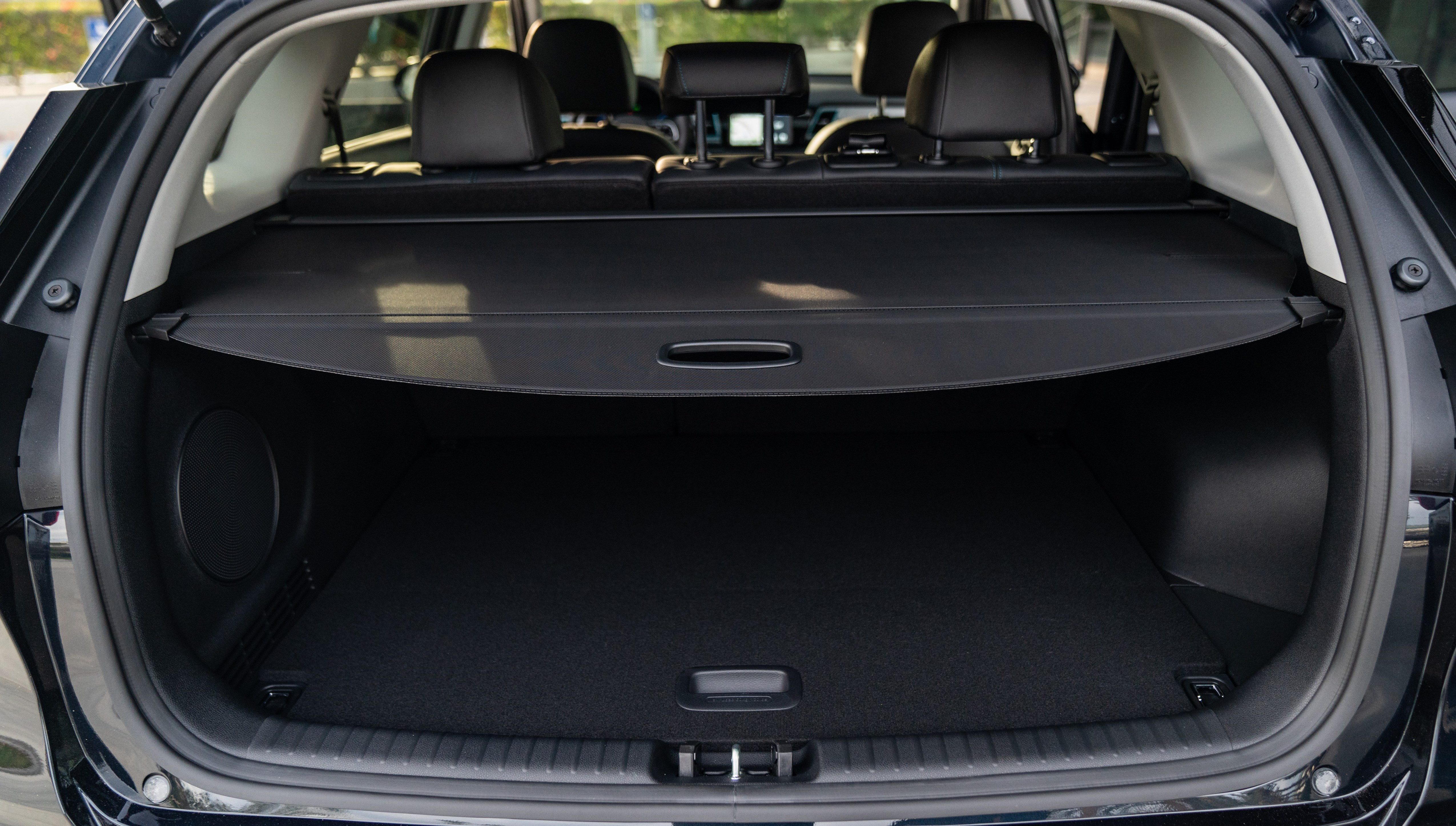 Overall, all of my issues with the Niro EV’s design are non-dealbreakers and I think it’s going to have a wide appeal.

The Niro EV is powered by a 150 kW front-wheel-drive motor.

Normally, that’s not something I get too excited about, but I was pleasantly surprised.

Kia controls the torque heavily from a standstill and you won’t be able to get that roller-coaster like instant experience when launching, but it does feel fairly powerful from 10 mph and up.

In my opinion, the Niro EV handles very well, especially for what it’s meant to be. I don’t think most owners would need to put the car into too difficult situations, but I decided to push it since I was testing the vehicle.

I drove the vehicle up some winding mountain roads outside of Santa Cruz and I was surprised at how much I was able to push it with confidence despite the form factor and small wheels. 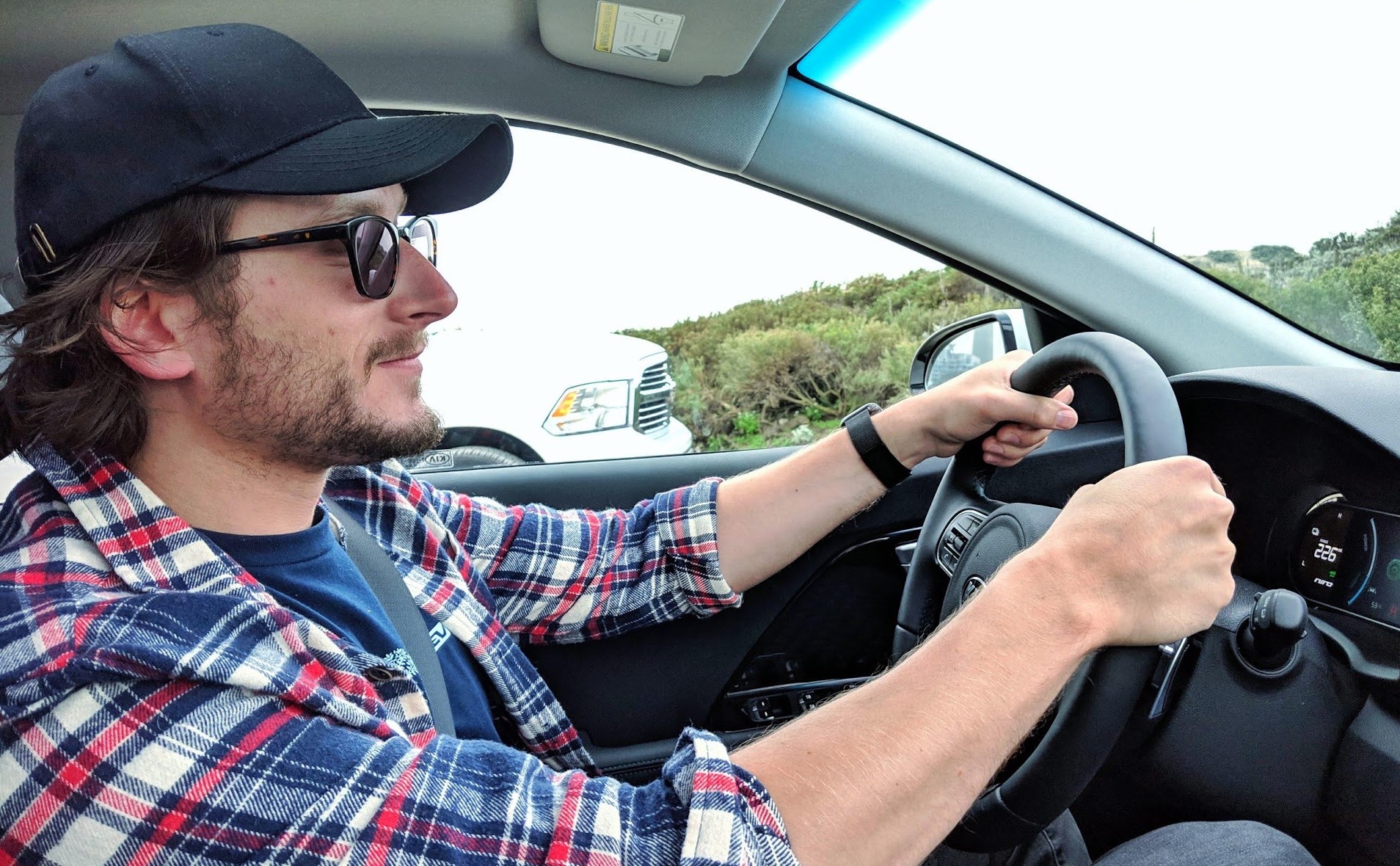 But there are a few things that I didn’t like about the driving experience, like the regenerative braking system.

It works with 2 paddles on the steering wheel that can switch between different levels, and you can also press the left paddle for even more regen.

I think it’s over-complicated and I felt that even at the highest level, the regen could have been a little stronger.

The driver assist features are also not on par with others on the market. The automatic steering system would ping-pong between the lines instead of helping to keep the car centered.

When it comes to range and efficiency, Kia is pushing it to a new level for an electric vehicle of the Niro’s size and price range.

Here’s a comparison chart with some interesting specs:

Let me say that the Kia Niro EV has legit range and efficiency. The EPA estimated range is 239 miles.

When starting our drive yesterday, our Niro EV was showing 247 miles of range and after a day of driving 130 miles, we ended up with an efficiency of 3.7 miles per kWh: 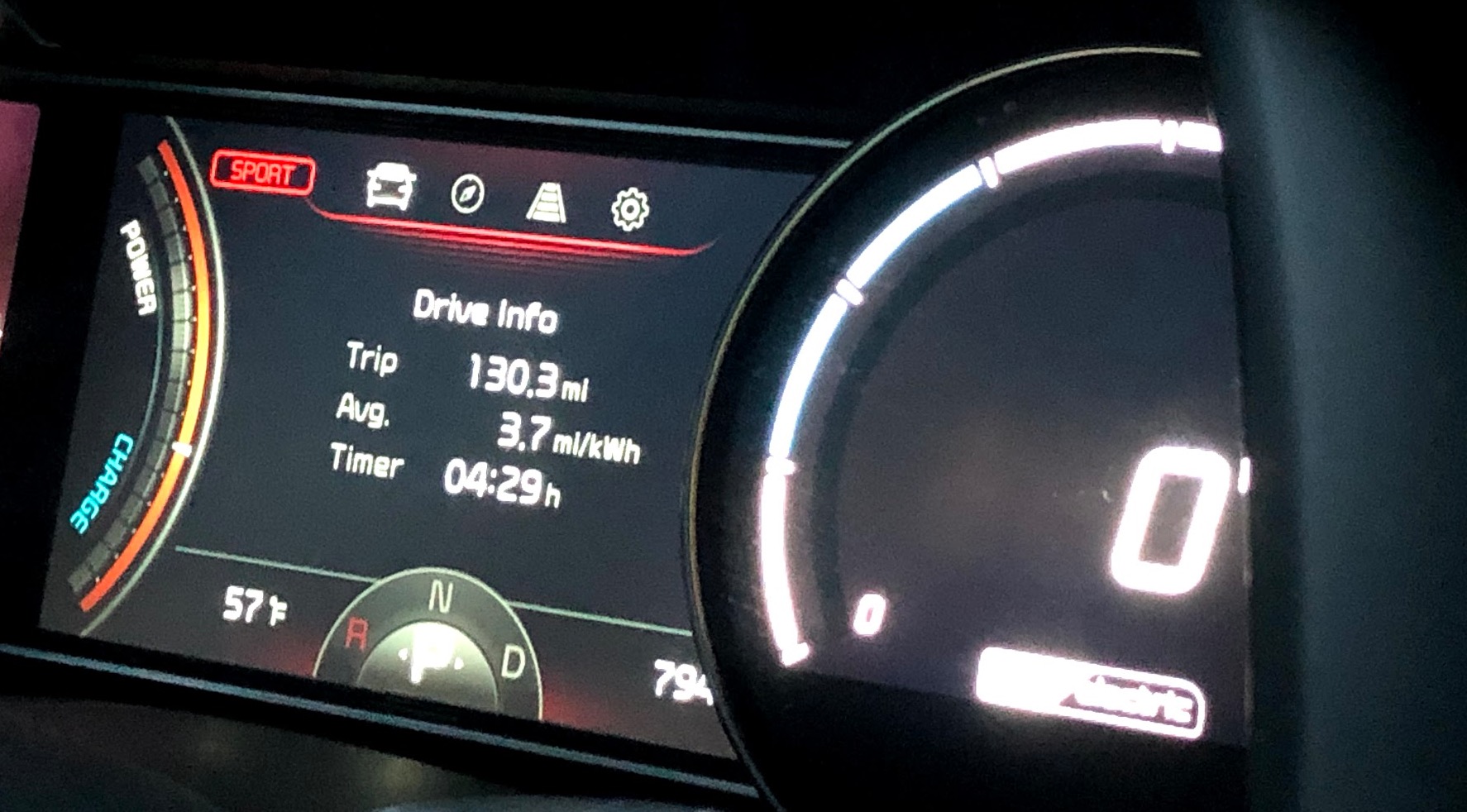 That would add up to 237 miles of projected range, which is impressing considering it is based on about 100 miles of a healthy mix of highway and city driving – plus about 30 miles of hard driving up and down the mountains.

I am thoroughly impressed by the Niro EV’s efficiency because I think I would be able to have a much higher range than the EPA estimate with more reasonable driving in good conditions.

As for charging, Kia says that the Niro EV can charge up to 100 kW, but as it is often the case with the press drive events, they don’t include much charging.

Once we get the chance to drive the Niro EV for a longer period of time, we will do a full DC fast-charging session with the vehicle.

That’s where things get a little more complicated. Kia has yet to confirm the pricing in the US, but it is expected to be competitive with the Kona EV, which starts at $36,450.

I would expect it to be about 10% more expensive.

The good news is that Kia is not making the car a compliance EV like Hyundai with the Kona.

When it goes on sale next month, Kia says that it will available in 12 states. Unsurprisingly, this includes all the CARB states, but also Georgia, Texas, and Hawaii.

That’s why I don’t think we can call it a compliance car, but it still comes with a lot of limitations.

Unfortunately, Kia couldn’t confirm plans to eventually make it available in all 50 states and they admitted that US allocations are going to be limited.

When I asked, they couldn’t confirm a production capacity for the all-electric version of the Niro.

Furthermore, they currently project that they will still have the full federal tax credit until “2023-2024”, which would mean that annual deliveries in the US will be relatively low considering 200,000 units are going to be split between the PHEV and BEV versions of several vehicles over 4-5 years.

I think the Niro EV is a very complete EV with a lot going for it. All of the things I dislike about it are non-dealbreakers and it is an efficiency beast.

If Kia could ramp up production, I think they would sell 200,000 units in the US by the end of 2021. I really hope that they figure it out because if they do, it could become one of the most important EVs to hit the market this decade.

The Niro EV is a crossover electric vehicle from…