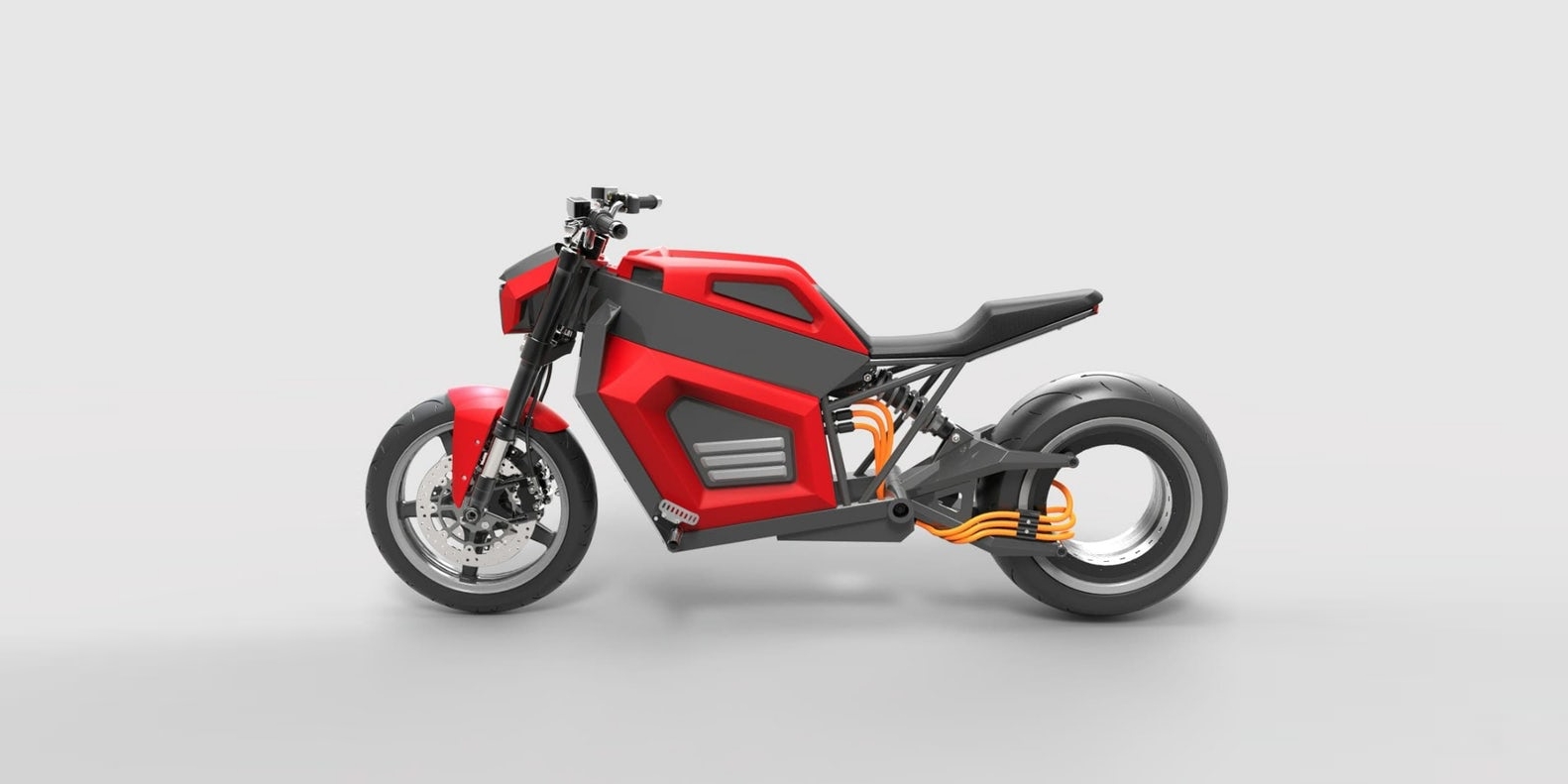 2019 is turning into a bumper year for electric motorcycles. Not only are a number of new models being offered by US companies like Zero, Lightning and Harley-Davidson, but manufacturers from across Europe and Asia are getting into the mix as well.

When we last saw the RMK E2 electric motorcycle, it was still in the design phase.

RMK was showing off some pretty impressive renderings of the novel architecture for the frame and motor, but the actual prototype was still very much a proof of concept.

But with the MP19 motorcycle show in Helsinki coming up this weekend, RMK was able to finish up their first production prototype and share some photos of the groundbreaking design.

The frame sports an aggressive, angular design with a wide body. Without a motor to take up valuable space in the frame, RMK should be able to load a fairly large battery into the bike. The company hasn’t announced the exact battery capacity yet, but has implied that it won’t be lacking:

“The E2 will have one of the largest available batteries in the motorcycle market, allowing a real-world range of 200-300 km (120-180 mi) depending on riding style and conditions.” 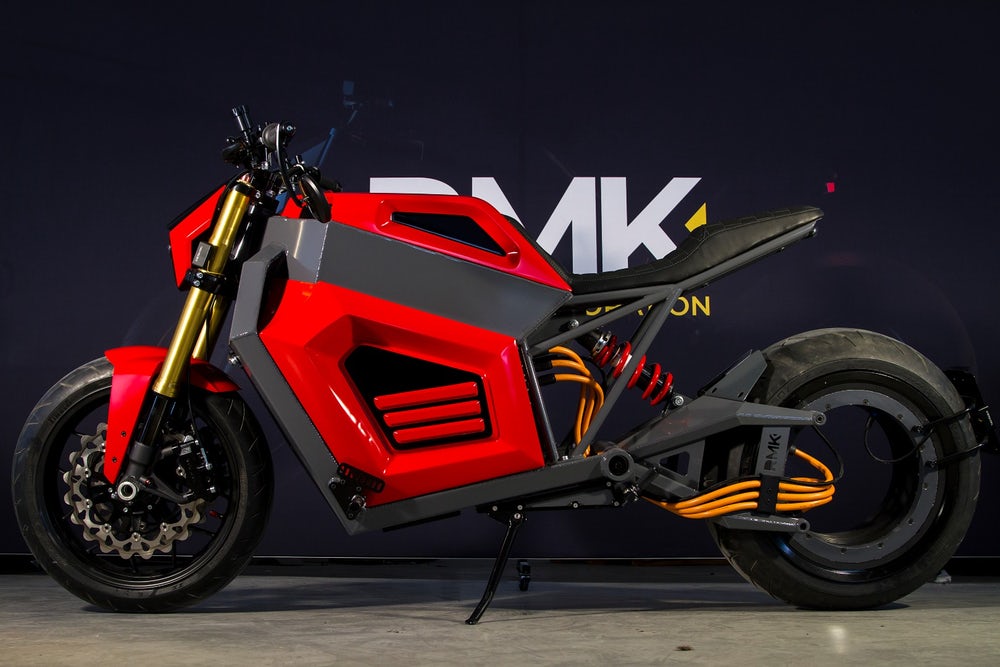 Early build photos released by RMK appeared to show Samsung 18650 battery cells being used in the bike. However, it isn’t clear if these cells will make it to the final design.

But while 180 mile range is impressive, the E2’s motor is what really steals the show.

Most electric motorcycles opt for a mid-drive setup with a chain or belt drive. Some lighter electric motorcycles use a hub motor, reducing complexity in the drivetrain. But RMK went a different direction entirely, developing an in-wheel motor that is completely hubless. The stator of the motor takes up most of the wheel’s inner rim, while the magnet-laden rotor comprises the outer portion of the wheel’s rim. Complex, but eye-catching.

Unlike many EVs which try to hide away unsightly heavy gauge wiring, the motor’s phase wires comprise a major design note on the E2. Their bright orange protective sheaths snake around the negative space under the saddle and along the swingarm to the motor’s stator.

But don’t mistake the motor for just a fancy design. Its performance is just as impressive as its construction. With 50 kW (67 hp) of power and 320 Nm (236 ft-lbs) of stump-pulling torque, this novel motor has the performance to match its aesthetics. Of course at 200 kg (440 lbs), the bike is not a featherweight and that torque will be necessary to get out of the hole quickly.

The electronically limited speed of 160 km/h (100 mph) isn’t incredibly fast compared to other bikes, but most riders won’t need to ever need to hit higher speeds. 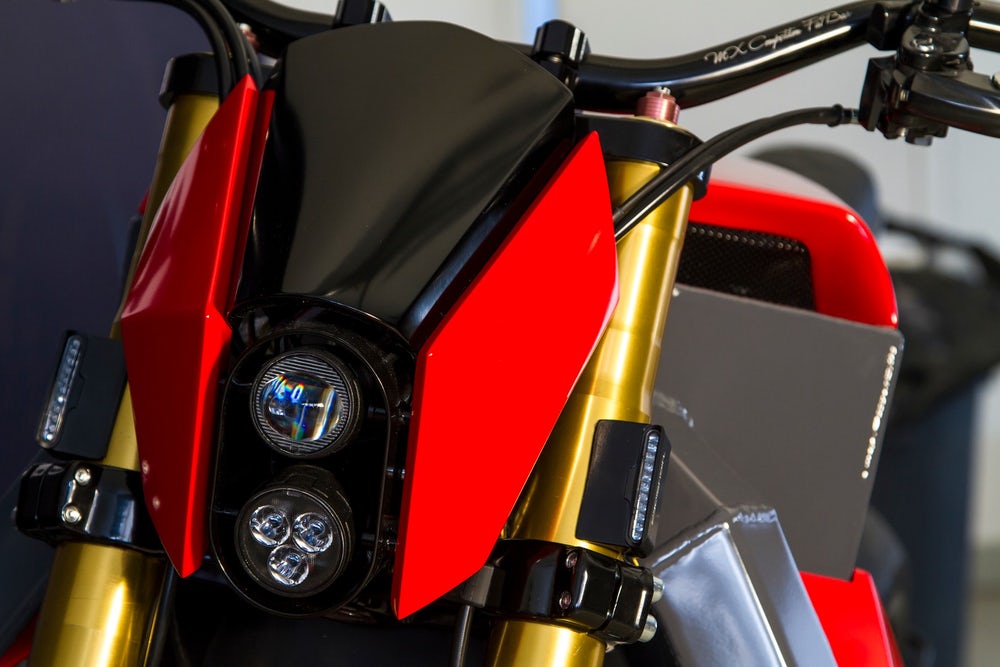 The new photos of the RMK E2 also reveal the digital instrument panel which is built directly into the top of the frame.

Combined with minimalistic controls and the drop mirrors, that leaves the handlebars looking nice and clean. 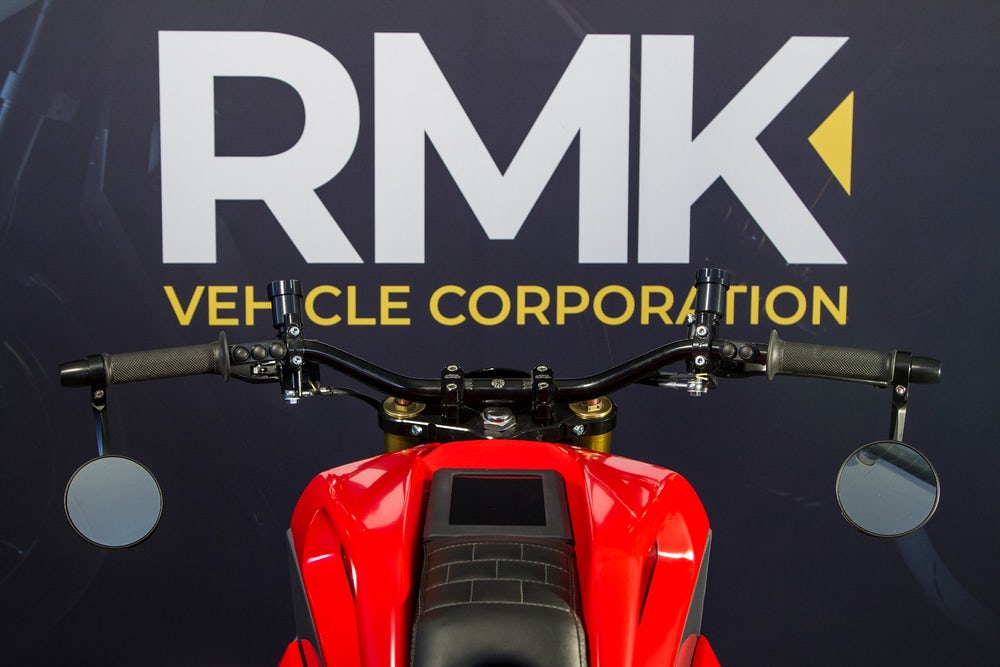 RMK is still in the testing phase, but the company is already working out the manufacturing details for the E2. Production is expected to occur mostly within Finland.

Pre-orders have already opened for the E2, and early adopters can reserve their own for €2,000 ($2,300). But to make the E2 yours, you’ll have to tack on another €23,000 ($26,600). That’s pretty steep in comparison to some tamer electric motorcycles we’re eyeing coming out of Asia, but still cheaper than some of the other high-powered electric motorcycles produced in Europe.

And according to RMK, the final version of the E2 could have even higher performance than the numbers they’ve published so far:

“Entering the market with a boring average product is obviously NOT the way we do things. Instead, we have chosen to take the tough route to the market by developing a whole new kind of powertrain. This means we will massively accelerate our testing program after the MP19 show. Performance figures and features we’ve stated so far will be the absolute minimum we will settle for. We aim to considerably surpass those goals and in some cases, we already have.”

I really respect the engineering and design work that went into creating the E2.

While some companies take the easier route and start with simpler OEM parts, RMK charted an entirely new path here.

I also think it’s great that they took advantage of the design freedom that the rear wheel motor offers to create a pretty sweet looking bike. The angular frame members give the whole thing a futuristic yet industrial feel. They also likely make production a lot easier, especially since the frame can be more easily cut and welded by hand. Startups like these don’t have the design budgets of companies like Harley-Davidson, so to create a product that can be produced easily in-house while still looking professional is an impressive feat.

At around $29,000, the E2 will fall into a similar price range and performance class as the Harley-Davidson LiveWire. And while it likely won’t have the same level of support or built-in tech, it will certainly be more unique.

What do you think of the RMK E2 electric motorcycle? Let us know in the comments below.