I’ve had a GenZe 200 series electric bicycle for about six months now. That’s given me a lot of time to get to know the e-bike inside and out, become accustomed to its technology, and see what makes this thing tick. And after all that time, I can give the GenZe e-bike two thumbs up!

I was already a big fan of GenZe, an electric mobility company based in Michigan. I’ve found their products offer simply top-notch quality.

You might have seen my past review of their electric scooter, the GenZe 2.0. It’s a sit-on scooter (think Vespa, not Razor) that can hit 30 mph (48 km/h) and has a ton of fancy tech features.

The company’s 200 series e-bikes share a lot of that same tech with the scooters.

The e-bikes don’t hit quite the same speed, coming in at just 20 mph (32 km/h), but that’s certainly adequate for a commuter e-bike.

Before I get too long-winded, make sure you check out my video review below to see the bike in action. Then read on to get all the juicy details about the GenZe e-bike.

The GenZe 200 series e-bike is powered by a rear hub motor rated at 350 watts nominal, though my guess is that it’s putting out closer to 500 watts of peak power.

That power is supplied by a 36V and 350 Wh battery, which is mounted in the frame and is removable from the side. The battery has a surprisingly small form factor yet offers a range of 30-50 miles (48-80 km) under pedal assist, or 15-18 miles (25-30 km) with pure throttle. I wouldn’t call the battery “pocket-sized” in the truest form, but I can literally put it in the pocket of any pair of jeans I own. That comes in handy if I’ve got two hands full of groceries and still want to bring the battery up to my apartment to charge it inside.

Once back in the bike, you can barely tell the battery is there. It is given away only by its small grab handle near the top and charging port at the bottom. Otherwise, it just looks like it’s part of the frame itself. 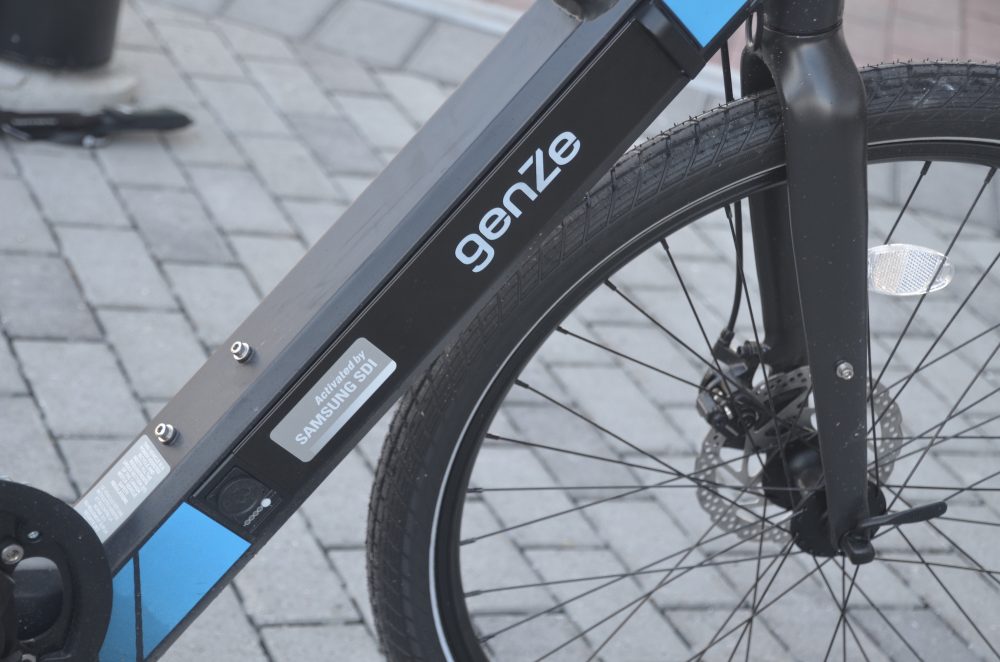 For those of you (like me) who prefer a hand throttle, the GenZe 200 series e-bike has that too. You can select through 5 levels of pedal assist, or drop it into Level 0 to activate the twist throttle. You can also operate the bike completely analog without any electrical assistance.

The GenZe is plenty peppy and offers good acceleration. It has mechanical disc brakes, which are one of the few things I would have liked to seen upgraded. Hydraulic disc brakes would have been nice for their reduced maintenance.

Fortunately, the mechanical brakes on the GenZe seem to work perfectly fine and haven’t needed too much adjusting during my riding. Plus, you’ve got to keep in mind that this is a $2k e-bike (or more with added accessories), and fancy features like juice brakes would make it harder to achieve that price point.

The bike does lack suspension, so it’s best used for the street. That doesn’t mean you can’t take it on a trail or two, as Yamaha’s electric gravel bike taught me recently.

In fact, the larger Schwalbe Big Apple tires on the GenZe mean that gravel trails should feel even smoother, even without the suspension. 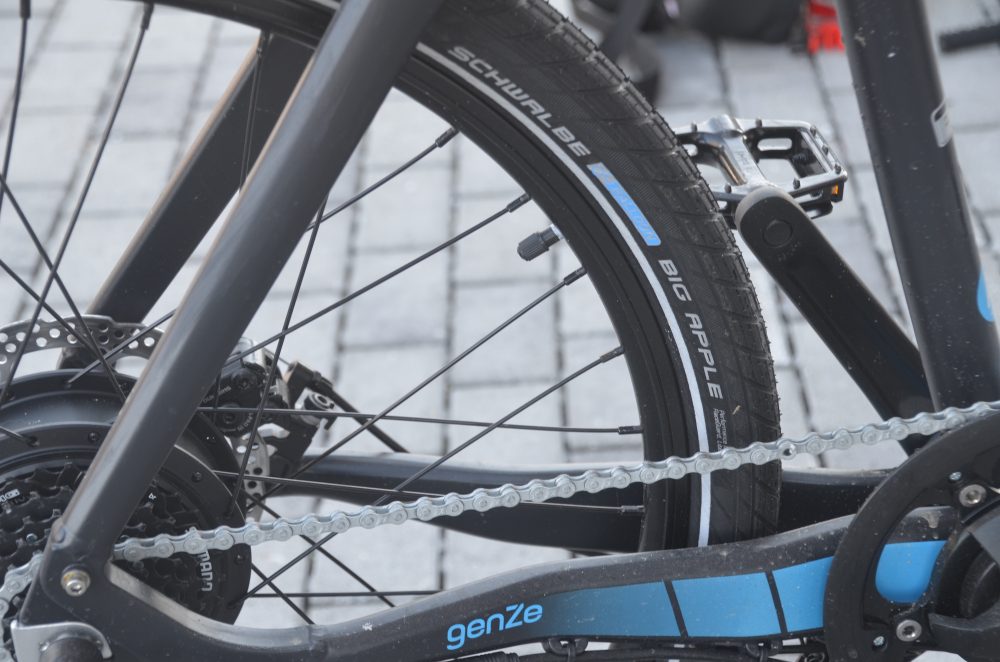 A lack of rear suspension is par for the course with commuter e-bikes. Sometimes companies will toss on a cheap suspension fork so they can try and fool you with “comfort” marketing gimmicks. In the end, cheap suspension forks make pedaling less efficient and are often the first thing to fall apart. In a way I find it refreshing to see a good quality rigid fork on a bike like this. The tires are sufficient for absorbing normal road vibration and any rider worth his weight in inner tubes does his best to avoid pot holes anyways.

The display on the GenZe is bright and clear, though it is mounted fairly low on the bike. Being integrated into the top tube, you’ll never have to worry about someone stealing the display from the bike. But it also means you have to look further down than you normally would to check your speed, battery, power assist level, etc. 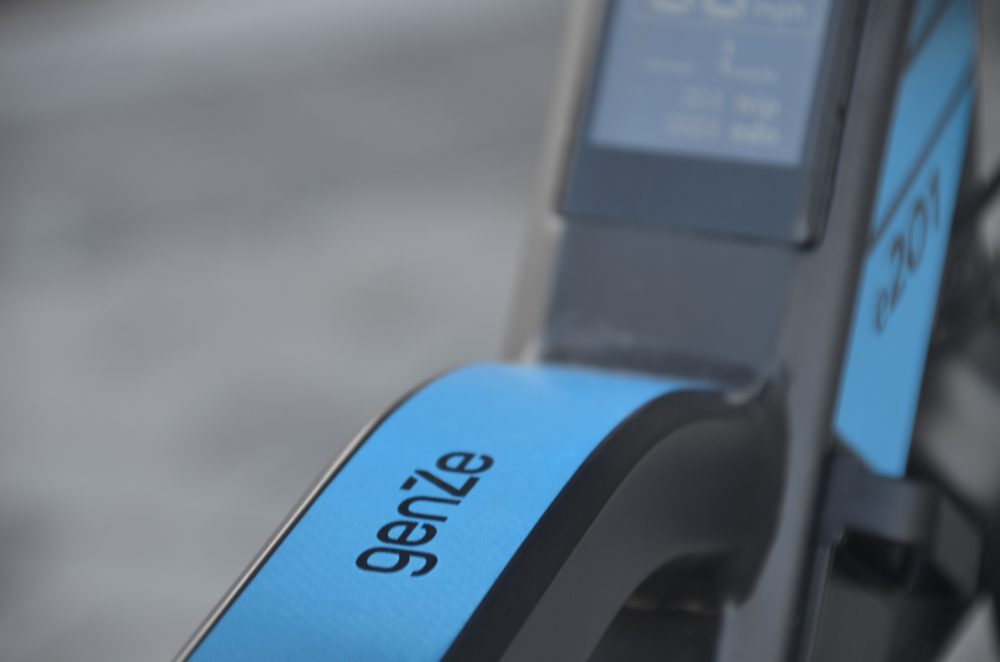 With 8 gear ratios, the GenZe 200 series e-bike is more pedal-able than a lot of other budget electric bicycles, offering you a full range of gears for everything from hill climbing to blasting through straightaways at full speed.

The bike itself is solidly built and feels much more robust than budget e-bikes. Everything about the bike feels high quality, just like you want to see on a daily rider. There are no cheap plastic pedals or brake levers – GenZe chose only proper heavy-duty cycling equipment for this bike. That includes many things that make a difference in the bike’s performance yet don’t add much to the cost, such as a strong double center kickstand or the inclusion of water bottle bosses. The ability to carry a water bottle is surprisingly hard to find on many electric bikes, believe it or not.

Basically, the whole bike is just well thought out and sturdily built. And that’s no accident, either. GenZe designs them that way for a reason. The company’s bikes are often used in industrial applications. City bike sharing programs like Ford’s GoBike use the GenZe bikes as their platform, with some modifications for sharing use.

In fact, GenZe just announced a new turnkey e-bike fleet service based on their electric bicycles. The e-bikes are largely identical to the consumer version, like the one I’ve been riding. However, they are supplemented with features including IoT technology designed to help independent operators easily launch and maintain a rental, corporate, or shared e-Bike fleet.

Companies with delivery services including Postmates and Doordash already use GenZe e-bikes in their own electric bicycle delivery fleets, and now GenZe is making that even easier for other companies to adopt their technology.

There’s a reason those companies don’t use cheap e-bikes found on Amazon. Companies who use bikes for deliveries need something more rugged that can stand up to all day, every day use. That’s what I love about the GenZe e-bike, it’s a solid machine that I can commute on, pushing it hard every day without worrying if the bike will hold up.

The real winner is the smartphone app

But as impressive as I have found the bike to be, the accompanying app is perhaps even cooler. It was developed in part by taking much of what was learned from the company’s large GenZe 2.0 scooter fleet.

In my review of the GenZe 2.0 scooter, I praised the powerful and convenient app that supports the scooter. You can thus imagine my excitement when I found that the GenZe bike uses a nearly identical app! 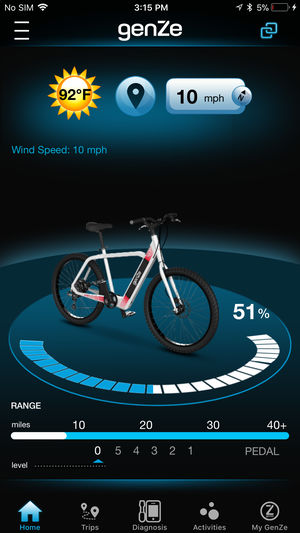 From the app you can do a number of things, from adjusting the bike’s settings to checking its location on a map to getting alerts if someone is tampering with the bike. You can even shut off the bike remotely to stymie a would-be thief.

The app also offers GPS navigation with turn-by-turn directions. And it will ensure that you are only taken on roads that are suitable for bicycles.

I use it most often for simple things though, like checking my battery level. It’s annoying to leave the apartment and check the battery charge level. With the app, I can know how much battery I have left and if I can reach my destination without leaving the comfort of my couch.

But the GenZe sure gives e-bikes that cost twice as much a run for their money.

For anyone looking for a reliable, well-built e-bike that is going to last for years, yet won’t break the bank, the GenZe 200 series is a great option. It’s rugged enough to withstand the daily toils of a true commuter bike and yet comfortable enough to make that commute a fun joy ride instead of a daily slog.

Don’t forget to let us know what you think of the bike in the comments below!