The GenZe 2.0 electric scooter is American made, Indian owned and European styled

Despite becoming a popular form of transportation across Europe and Asia, two-wheeled scooters and mopeds never really caught on in the US to the same degree. But with a new wave of electric scooters coming, perhaps the time is right for that to finally change.

Mahindra certainly believes so, and has put their money where their mouth is with a production facility for their all-electric scooter, the GenZe 2.0, in the heart of Detroit.

The blazing emblem of a by-gone era of car culture in America is the site of Mahindra’s entry into the two-wheeled all-electric vehicle market in the United States.

Mahindra, who partnered with Uber to deploy electric vehicles in India last year, is one of the largest automotive companies in India and has applied their decades of experience into the design of the GenZe 2.0 electric scooter. With ten’s of millions of scooters sold in India every year, they know what it takes to build a functional and effective vehicle.

The GenZe 2.0 could very well be the electric scooter that helps get urban commuters in the US out of a 4 wheeled box and onto a fun, zippy two-wheeler. Considering that it uses a tiny fraction of the energy of a car, even an efficient electric car, and can arrive much faster in dense urban traffic, not to mention allowing riders to commute on their own schedule unlike a bus or subway, Mahindra thinks the scooter should sell itself. 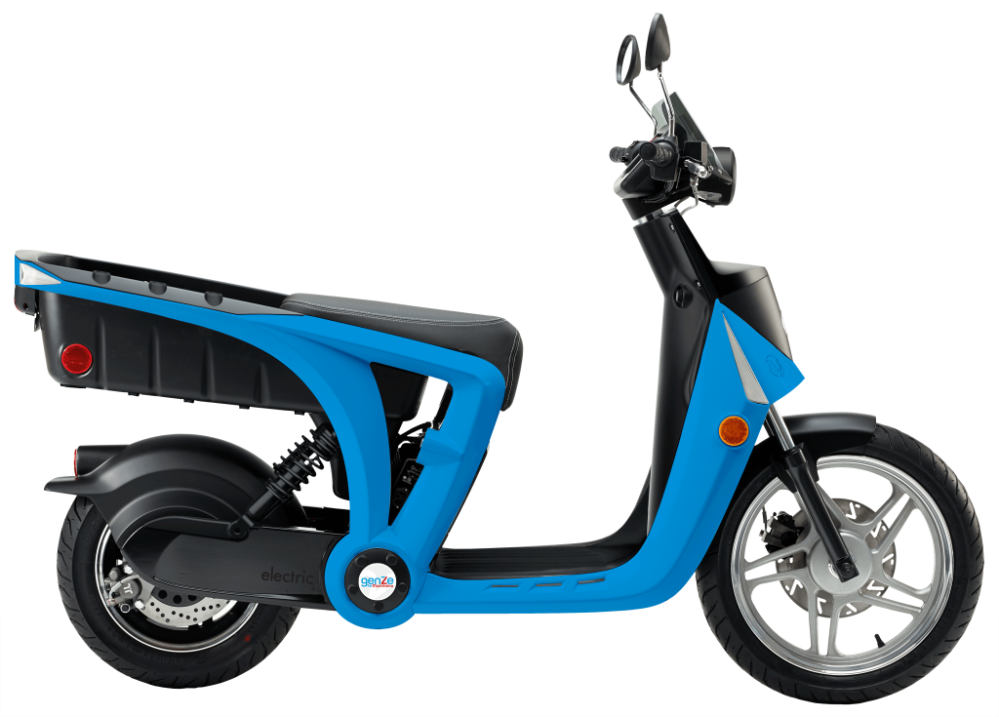 With a maximum speed of 30 mph (48 km/h) and a maximum range of 30 miles (48 km) per charge, the GenZe 2.0 is solidly placed in the urban and suburban commuting market.

That top speed might sound fairly low to some people, but it is designed to keep the scooter street legal in most areas without requiring a motorcycle license. In almost all states, motorized scooters that travel at speeds up to 30 mph (48 km/h) only require a standard drivers license, meaning you can hop on your scooter and start riding from day one.

A 1.6 kWh removable Li-ion battery pack (shown below) is placed low below the seat for a low center of gravity that helps improve handling, and allows you to take the battery inside for charging – an important feature for those without a garage at home to charge inside. Charging takes around 4-4.5 hours for a full charge from a standard 110V outlet, and the battery is rated for 900 complete charge cycles before reaching 80% of original capacity. 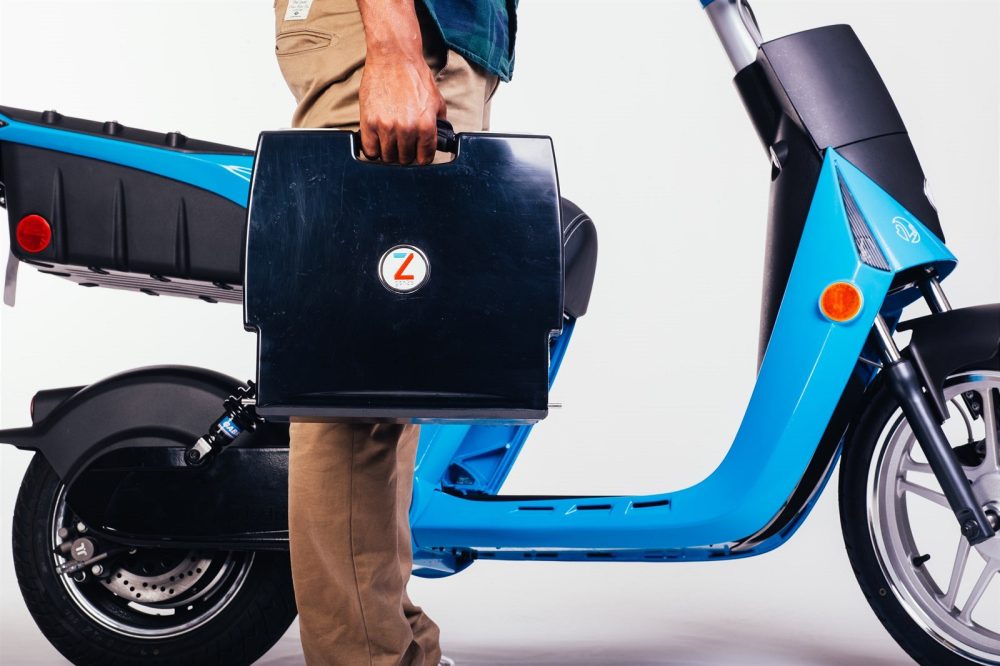 LED lights are included around the vehicle for high visibility, which is important when you’re mixing it up with larger vehicles at night. And the large 7″ backlit LED touchscreen display makes it easy to glance at your readout for info like speed, range and battery percentage without taking your eyes off the road. The display also includes other info that may be of interest, including efficiency, energy usage data and CO2 consumption.

The touchscreen display also lets you choose between three different speed settings including easy (for new riders), economy (for better range) and sport (for quicker acceleration). 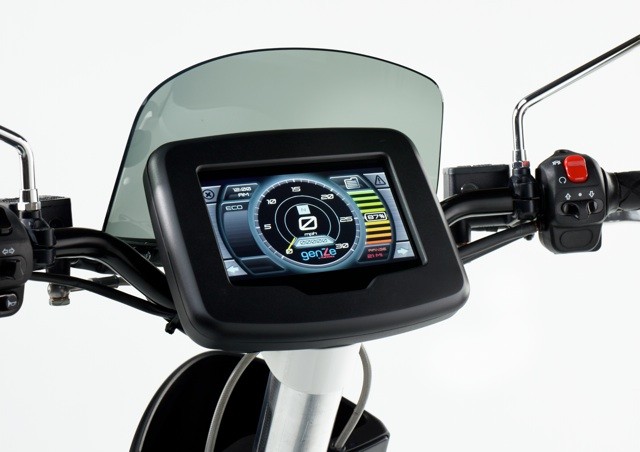 In addition to the large display, Mahindra also includes an app that is designed to pair with the GenZe 2.0 and provide a number of additional features, including running diagnostics on the cloud-connected scooter, change settings, and even help you find the shortest route for your trip that avoids highways, ensuring you’re always choosing a safe and comfortable route.

The app also provides an anti-theft solution. It can alert you when your scooter is moved, helping to head off theft attempts. And if someone does manage to make off with your scooter, you can track its location in real-time via the app to hunt it down, or better yet, show the police its location.

The scooter includes 90 L (3.18 cubic feet) of storage space and has a wide foot area due to its typical step through design, which makes it more comfortable to ride for most users who aren’t accustomed to a motorcycle.

Mahindra describes the GenZe 2.0 scooter as something between a moped and a pickup truck, due to its large open-top rear storage area. A number of accessories are also available including bags, covers and expandable hard top options to turn the pickup truck-style bed in the back into an enclosed and lockable storage bay.

And it isn’t just individual commuters that GenZe is targeting. Multiple ride share companies, including Scoot in San Francisco and Scoobi in Pittsburgh, offer GenZe 2.0 scooters for rental across the city. Even if you don’t buy your own scooter, you could have the chance to ride one sooner than you think.

While some people will probably balk at the 30 mph top speed and 30 mile range, it is important to remember what this scooter is designed for: city and suburban commuting. This isn’t the scooter to ride Highway 1 up and down the California coast, it’s meant to get your butt to work on time for those that commute on roads with traffic that doesn’t exceed 35-ish mph, which describes most big cities I’ve lived in. And if you wanted, you could even ride your scooter right into your lobby or office, since you never have to worry about it leaking oil or gas. Of course if your boss frowns on that, parking a scooter is still much easier (and often free!) than finding car parking in the city.

At current prices, the GenZe 2.0 is definitely more expensive than a standard 50cc gas scooter, though it is about the same price as a 50cc Vespa (who is of course working on their own electric scooter). However, I’d wager that an electric scooter is also a lot more fun than a gas scooter. I’d rather be cruising with just wind noise than a rattling one-cylinder engine against my calves any day, not to mention arriving without smelling like engine exhaust.

Fortunately though, more electric scooters are entering the US market soon at lower prices. Added competition will be great for consumers, since it will not only offer more options but also help drive prices down as well.