Harley-Davidson just announced that they have bought StaCyc, Inc.

StaCyc is a California-based manufacturer of electric balance bikes designed for kids.

The company was founded in 2016 and offers multiple innovative electric balance bikes. The models come in a 12″ and 16″ version designed for kids ages as young as 3.

The bikes are powered by mid-drive motors and drill-battery sized power packs. With three different speed settings, the StaCyc electric bikes can travel at speeds from 5-11 mph (8-18 km/h). Just like Harley-Davidson’s LiveWire electric motorcycle, the kid-sized StaCyc bikes feature an electronic twist throttle on the handlebars. 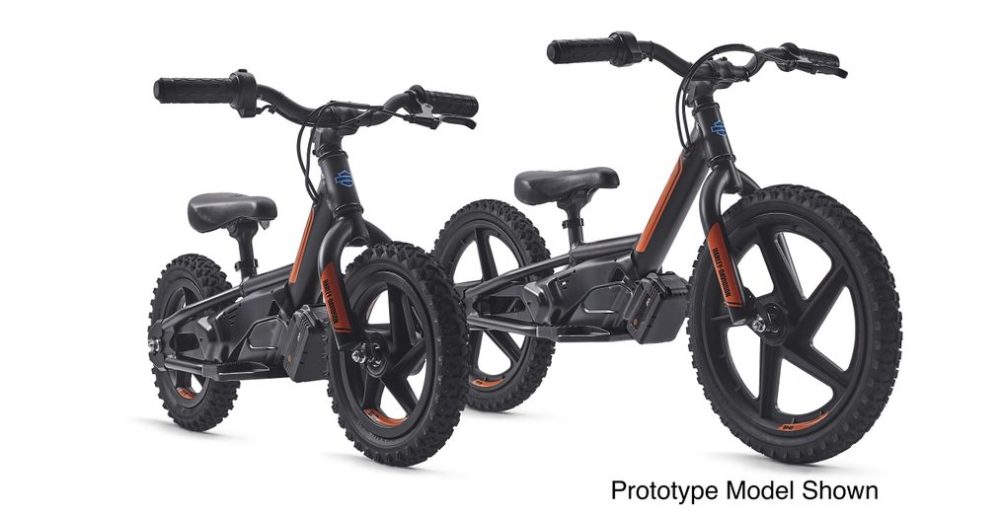 The small 40 or 80 Wh battery packs can be recharged in under and hour and can be swapped for spare batteries to lengthen the ride. That’s a feature you won’t find on Harley-Davidson’s LiveWire electric motorcycle!

And while these little e-bikes may appear diminutive, they actually pack some power. Matt Handy, a Fit Specialist at Boston Harley-Davidson showed the StaCyc bikes off to me in a recent visit. “They can even drag me around!” said Matt, who I might add is decidedly not child-sized.

While it might seem odd that the all-American bar-and-shield motorcycle manufacturer is buying a kid’s e-bike company, the move is actually fitting for the company. H-D has been trying to expand its market for years in the hopes of appealing to younger riders.

According to Harley-Davidson Senior Vice President of Marketing and Brand Heather Malenshek:

“We’re thrilled to have StaCyc become part of the Harley-Davidson family. The StaCyc team shares the same vision we have for building the next generation of riders globally and we believe that together, we will have a significant impact in bringing the fun and enjoyment of riding to kids everywhere.”

Harley-Davidson has been on an electric streak lately. Most people familiar with the brand are already aware of the company’s upcoming LiveWire electric motorcycle. It went on sale earlier this year, and Electrek got an up-close view last November at the 2018 EICMA Milan Motorcycle Show.

In addition to its flagship LiveWire, H-D has unveiled another four electric bikes that it plans to debut by 2022. The portfolio of five electric vehicles is part of the company’s “More Roads to Harley-Davidson” campaign seeking to expand ridership.

Harley-Davidson isn’t just paying lip service here either. The company has already rolled out two of the four new concepts at CES 2019 last month. The company also brought them to the 2019 X-Games in Aspen. Lucky riders got the chance to test out Harley-Davidson’s light electric dirt bike and the urban scooter design.

Sure, it’s kind of funny that Harley-Davidson purchased a kid’s e-bike brand. But listen, I think this actually speaks to the company’s commitment to EVs.

We all know that H-D isn’t in the best financial situation that the brand has ever seen. The company has been reporting lower numbers quarter after quarter. Which makes sense. H-D’s core customers aren’t getting any younger. Insert joke about ICE bikes and dinosaurs here.

But consider this: companies who are struggling financially don’t go around buying companies willy nilly. Harley-Davidson actually sees the potential for real profits in electric vehicles – and that’s for all sectors. Whether it’s a big premium LiveWire electric motorcycle or small e-bikes for kids, H-D is fully embracing EVs as a path back to prosperity. And as an American brand with a legacy to uphold, I’m all for seeing Harley-Davidson return to greatness.

So today it’s electric bikes for toddlers. Tomorrow will be the H-D scooters, mopeds and light dirt bikes. Then more electric motorcycles that are (hopefully) more affordable than the LiveWire. That’s Harley’s game plan and to the company’s credit, it’s sticking to it!