Despite being a little late to market due to “software issues”, Audi’s e-tron electric SUV is likely going to be the passenger electric vehicle with the fastest charge rate on the market – at least for the first half of 2019.

It has now been spotted charging at 155 kW and it maintained a high charge rate for an impressive part of the session.

When Audi revealed the production version of the e-tron, it confirmed that the vehicle would be able to charge at up to 150 kW.

The German automaker claimed that it could charge the e-tron’s 95 kWh battery pack from 0 to 80% in about 30 minutes.

Audi has test vehicles in Europe and one of them stopped at a FastNed charging station giving us our first third-party confirmation of Audi’s claim. 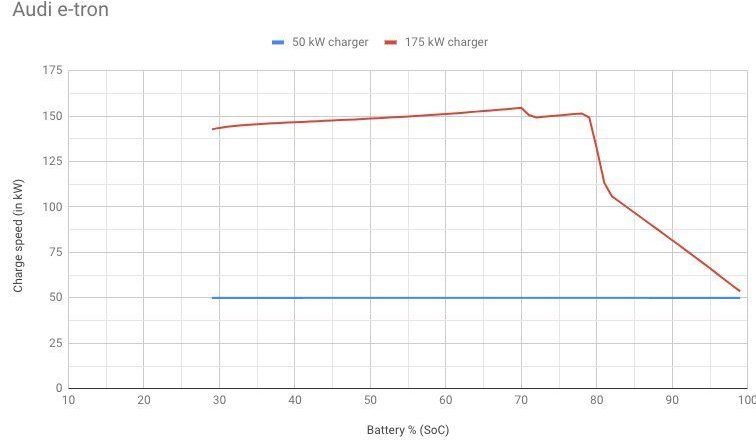 In this example, the e-tron started at a ~29% state-of-charge and charge all the way to a full charge.

The electric SUV fairly quickly achieved a 150 kW charge rate and it was even able to exceed the charge rate at around 60% state-of-charge.

The most impressive thing is that the e-tron was able to maintain a ~150 kW charge at up to almost 80% state-of-charge.

For more on the Audi e-tron, you can read our first drive review from earlier this month.

In comparison, a Tesla Model X stops at ~120 kW and it tapers off much quicker than 80% state of charge.

The problem with that comparison is that the Model X is actually more efficient, even though it’s bigger, so the difference in range added per minute is actually quite similar to the e-tron despite the latter having a much faster charge rate.

Therefore, while I am glad that Audi is pushing fast-charging to a higher charge rate, the accomplishment is somewhat less impressive due to the electric SUV’s efficiency.