Audi e-tron first drive review: a solid SUV that happens to be electric

The Audi e-tron is the first next-gen all-electric vehicle to launch the Volkswagen Group’s electric offensive. They invited us to participate in the first official media drive to get our impressions of the electric SUV.

Audi flew us all the way to Abu Dhabi in the United Arab Emirates to test the e-tron.

Not knowing much about the country other than the fact that it’s an extremely rich oil state, I wasn’t sure what the appeal was to bring us to the region for a test drive, but it became clear after a day there.

They have some beautiful and well-maintained roads with very little traffic once you are outside of the downtown area.

We picked up the e-tron in Masdar City, which is a settlement fully powered by renewable energy outside of Abu Dhabi.

I first saw the e-tron in person at the launch event in San Francisco and I was already impressed by the design back then.

But now we got to see the SUV on the road and out in the world. I have to say, it’s a stunning vehicle.

The proportions are near perfect for the segment and Audi didn’t fall for the usual electric design traps.

They just made the best looking SUV they could make and it just happens to be electric, which is refreshing coming from an established automaker.

As for the interior, it’s spacious for the size with generous headroom in the front seats and in the back.

The cockpit is identical to the one in Audi’s latest generation vehicles except for the screens embedded inside the doors for the virtual side mirrors – more on that later.

Audi brought early European production units, which are slightly different from the versions that will be available in the US.

Now that I have been driving Tesla vehicles on a daily basis for a while, I have to say that I find it hard to adapt to the crowded interior of most premium vehicles out there.

That said, I know that’s what most premium vehicle buyers are used to and they will likely feel right at home in the Audi e-tron.

After a quick walk around the vehicle, we set out for a day of driving, which was mostly done on highways between Abu Dhabi and Al Ain.

The highway driving in the e-tron was comfortably boring, as it should be. The cabin was extremely quiet, which added to the smooth experience on the road.

Audi’s latest driver assist features, including adaptive cruise control and auto-steering, are available on the e-tron and I found them to be competent during my drive.

The capabilities are similar to Tesla’s Autopilot – though to be fair, the conditions were ideal with clear road markings almost everywhere in Abu Dhabi. 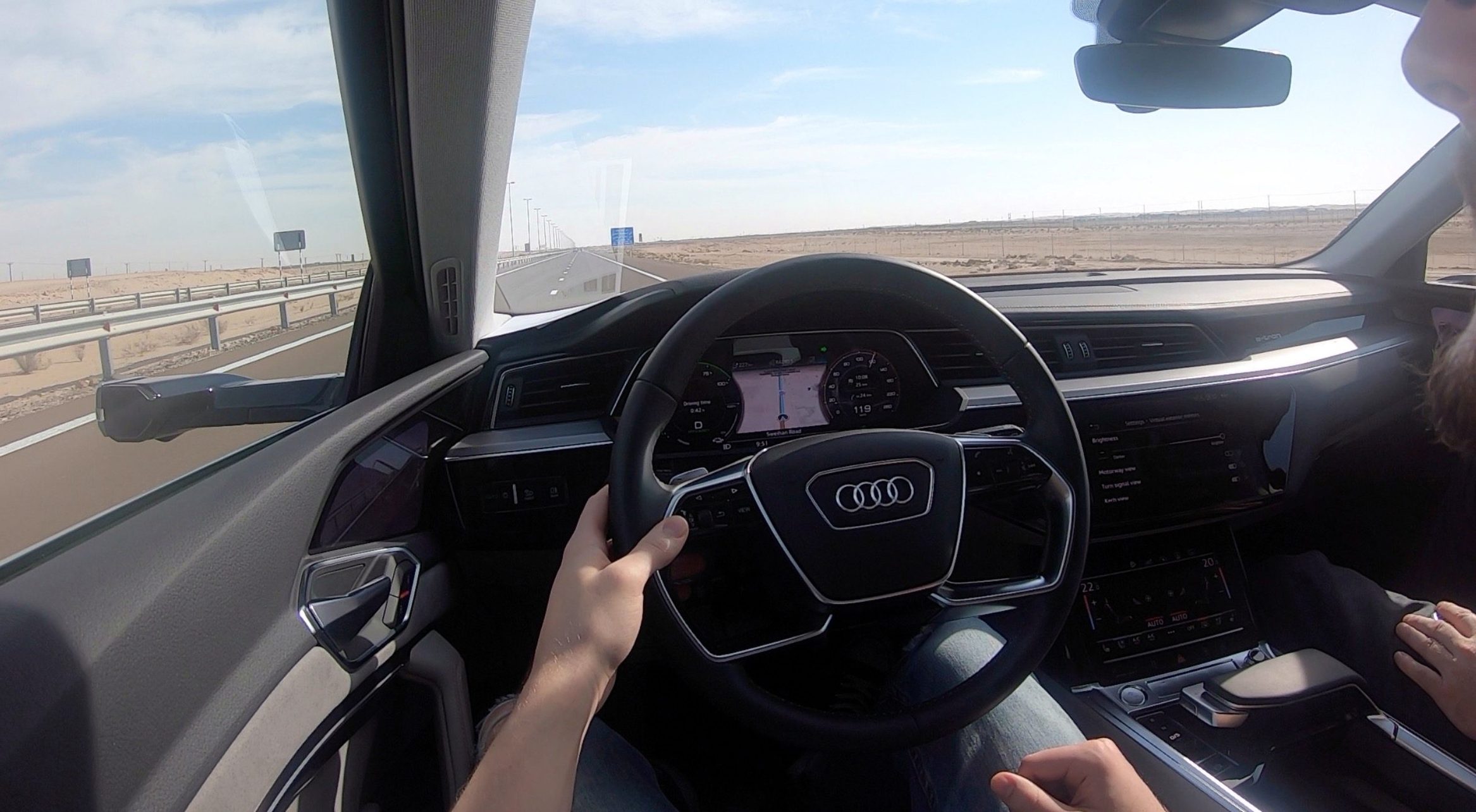 Under the version tested, I had to apply a little torque to the steering wheel in order for the system to detect that I was holding it, but Matthew Mostafaei, Audi e-tron program manager, told us that the US version is going to have a more advanced sensor that will be able to detect if the driver is simply holding the wheel.

That would be a welcomed improvement. We’ll have to test the system again once it makes it to the US.

One of the first things you experience when driving an electric vehicle is the regenerative braking, but that’s not the case with the e-tron because it’s just so smooth.

They found a nice balance that I think will help new EV drivers transition to electric driving and that’s not because they reduced the strength of the regen since the e-tron can get up to 0.3G of deceleration from the regenerative braking.

My only issue with the regen is the user interface to control it, which is based on two paddles on each side of the steering wheel: 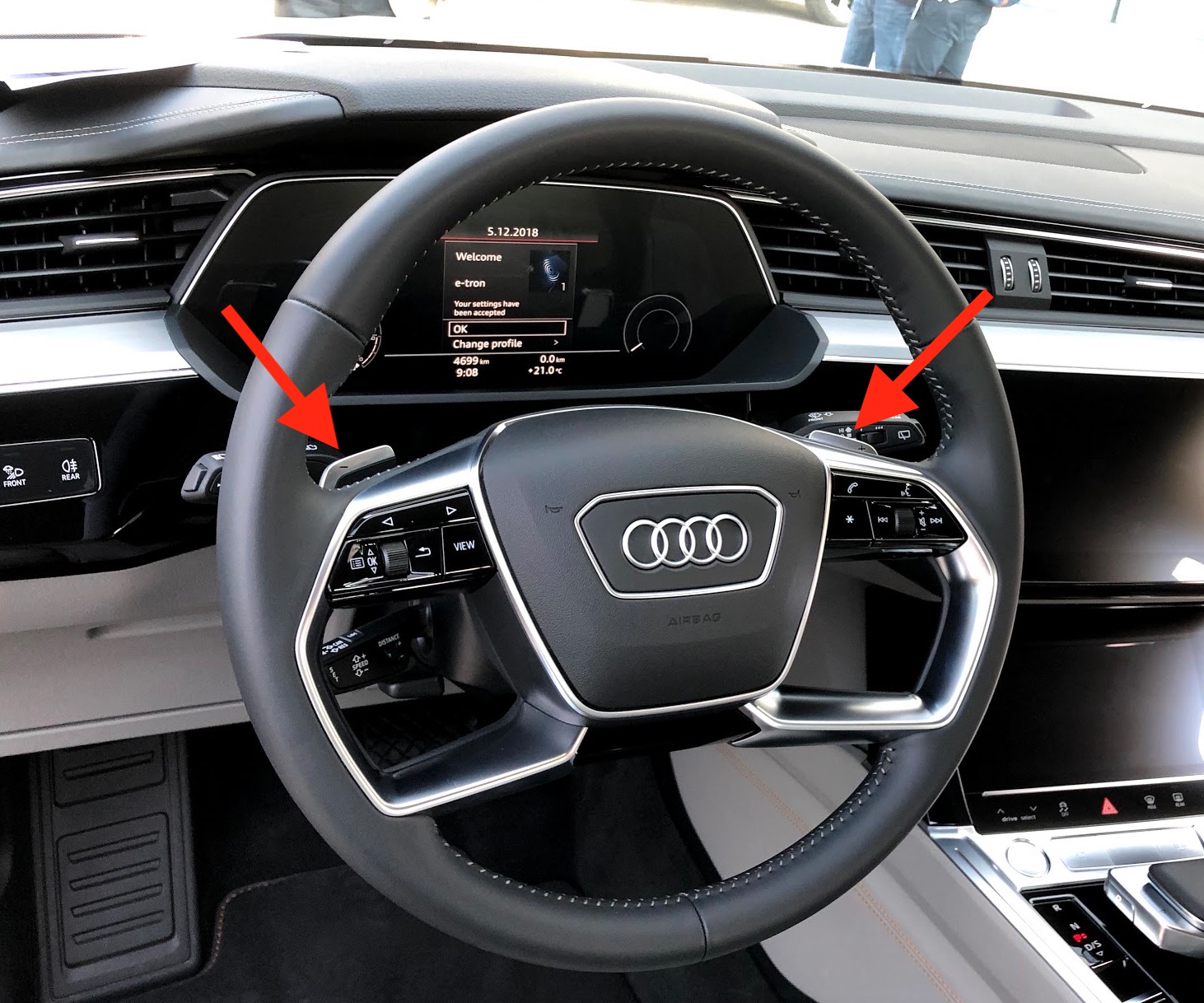 You have to press the ‘minus’ paddle to increase the potential regen capacity, which I don’t think is really intuitive.

But the actual execution of the regen is impressive and adds to the overall smooth driving experience.

Audi’s seats are comfortable and the version we tested included massage seats. I always thought those were kind of gimmicky, but I have to say that they were appreciated in traffic.

Again, the version we tested was an early European production unit and the virtual side mirror, which consist of cameras replacing the mirrors, are going to be an option in Europe.

In the US, Audi is lobbying to get them approved, but it won’t be an option until that’s the case.

They work fairly well, but it takes some getting used to for the driver to have the reflex of looking at the door instead of through the window where the mirrors are usually located.

It’s not something I was able to do in one day of driving, but I am sure it’s something you get over in a week or so and it’s certainly worth it for the efficiency gain.

This is where the e-tron doesn’t score strong, but they had to compromise on efficiency in order to package the vehicle as a well-rounded SUV.

We started out with a full charge that the e-tron’s system predicted would result in 323 km (200 miles): 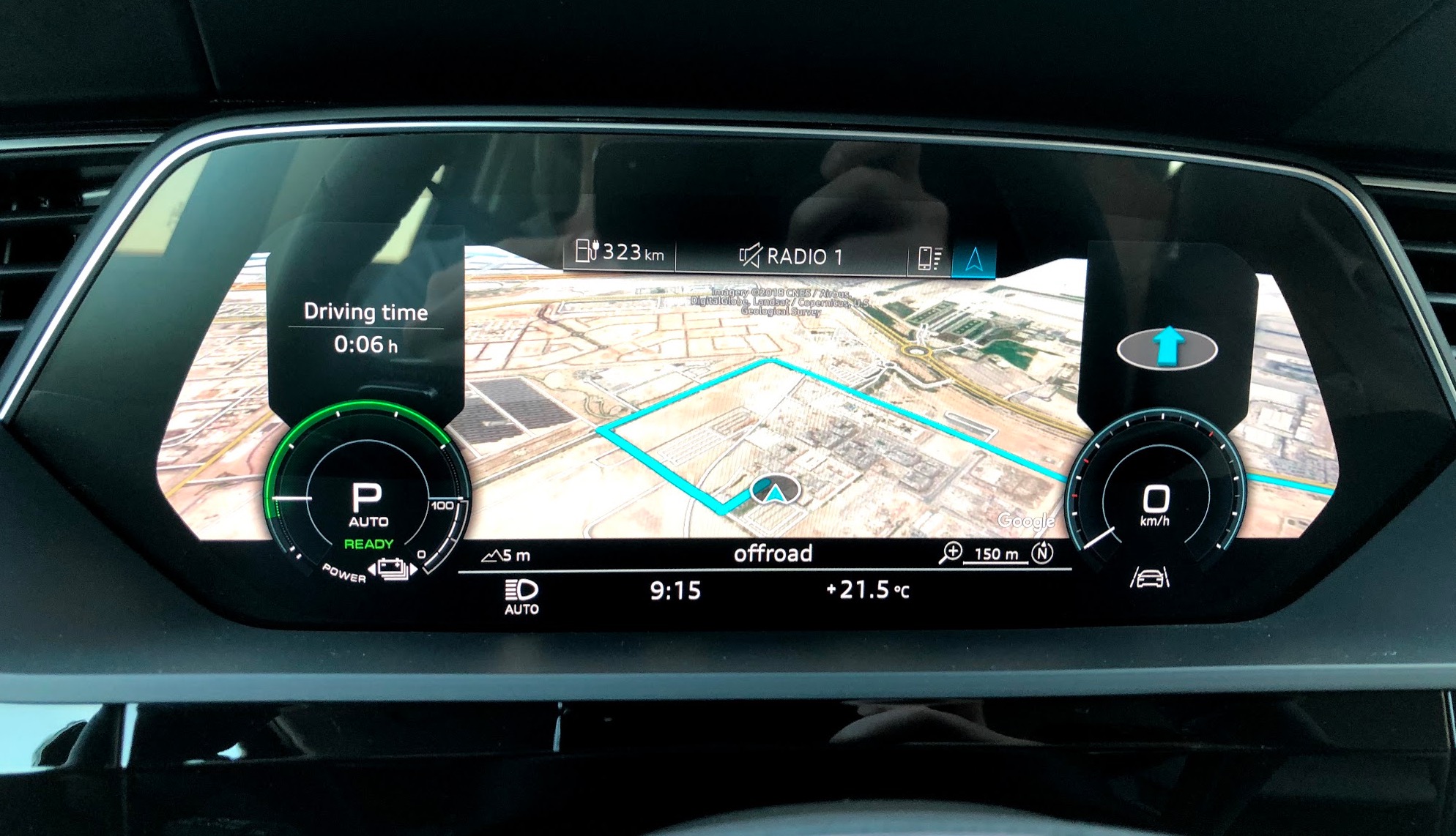 Based on our day of driving, it looked like that range prediction was about right for a combination of highway and city driving.

But on the highway, you are going to see the range go down a lot faster.

The regenerative braking doesn’t have much of impact on the highway, but it does make a big difference in city driving and where you have some elevation.

We drove up a mountain and then back down. Audi gave some interesting data from that part of our drive:

The e-tron consumed about 9 kWh of energy capacity to climb up the mountain and it recuperated about 6.4 kWh going down.

This is where the e-tron shines. It’s the first all-electric passenger vehicle to hit the market with a charging rate up to 150 kW.

We stopped to charge during lunch and while we couldn’t get a complete view of the charging cycle, I saw the charge rate quickly go up to 135 kW:

This is promising. #audi #etron pic.twitter.com/Y0PzFaaqJM

Audi said that the limiting factor was the charging station, which wasn’t equipped with an active cooling cable.

Mostafaei said that we will soon have a chance to see a full charging station on a 150 kW Electrify America charger once the car is in the US and we should be impressed by how fast it gets to 150 kW and how long it can maintain the charge rate.

They believe that drivers should be able to add about 160 miles of range in about 30 minutes.

That’s another thing we will have to check out when the Audi e-tron hits the US market next year.

With level 2 charging stations, the 11 kW onboard charger will be able to get a full charge in about 9 hours. We didn’t test that during our driving day.

To be clear, this is not our full review of the Audi e-tron. It’s more of a “first drive review” as we are going to need more time with the SUV to get a complete idea.

The efficiency is disappointing, but that’s because they prioritized making it an SUV with a more accessible design. It’s not as aerodynamic as the Tesla Model X, but I think the design is a lot less polarizing.

At ~5,500 lbs, the weight doesn’t help either, but again, that’s because Audi wanted the e-tron to have all the features premium SUV buyers are used to, including those massage seats.

People should still be able to get about 200 miles of range out of the e-tron and that’s more than enough for most use cases.

With the higher charge rate, it should also still be adequate for long-distance travel as Electrify America’s network expands.

I think if that can be clearly communicated to customers, the e-tron could be the electric vehicle that premium SUV buyers will be able to transition to with the least friction possible.

In my opinion, it’s well positioned in the segment to convert more people to electric driving. 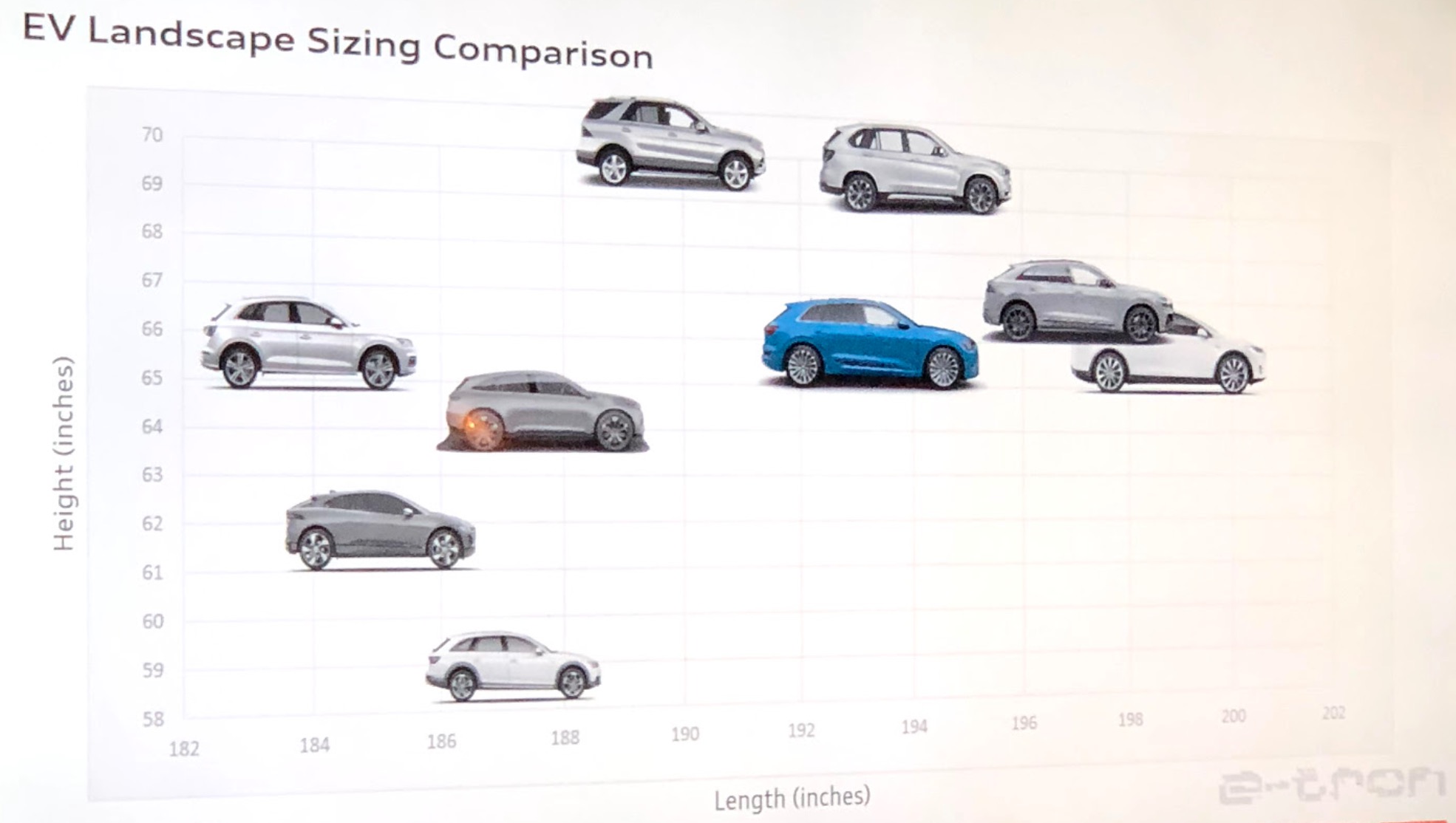 While I can see why some people would prefer to go with the Model X or I-Pace, I think the e-tron is going to have wider appeal, especially starting at $74,800 for the base version before incentives.

The Audi e-tron also comes with 1,000 kWh of free charging on Electrify America’s network, which is a valuable offer.