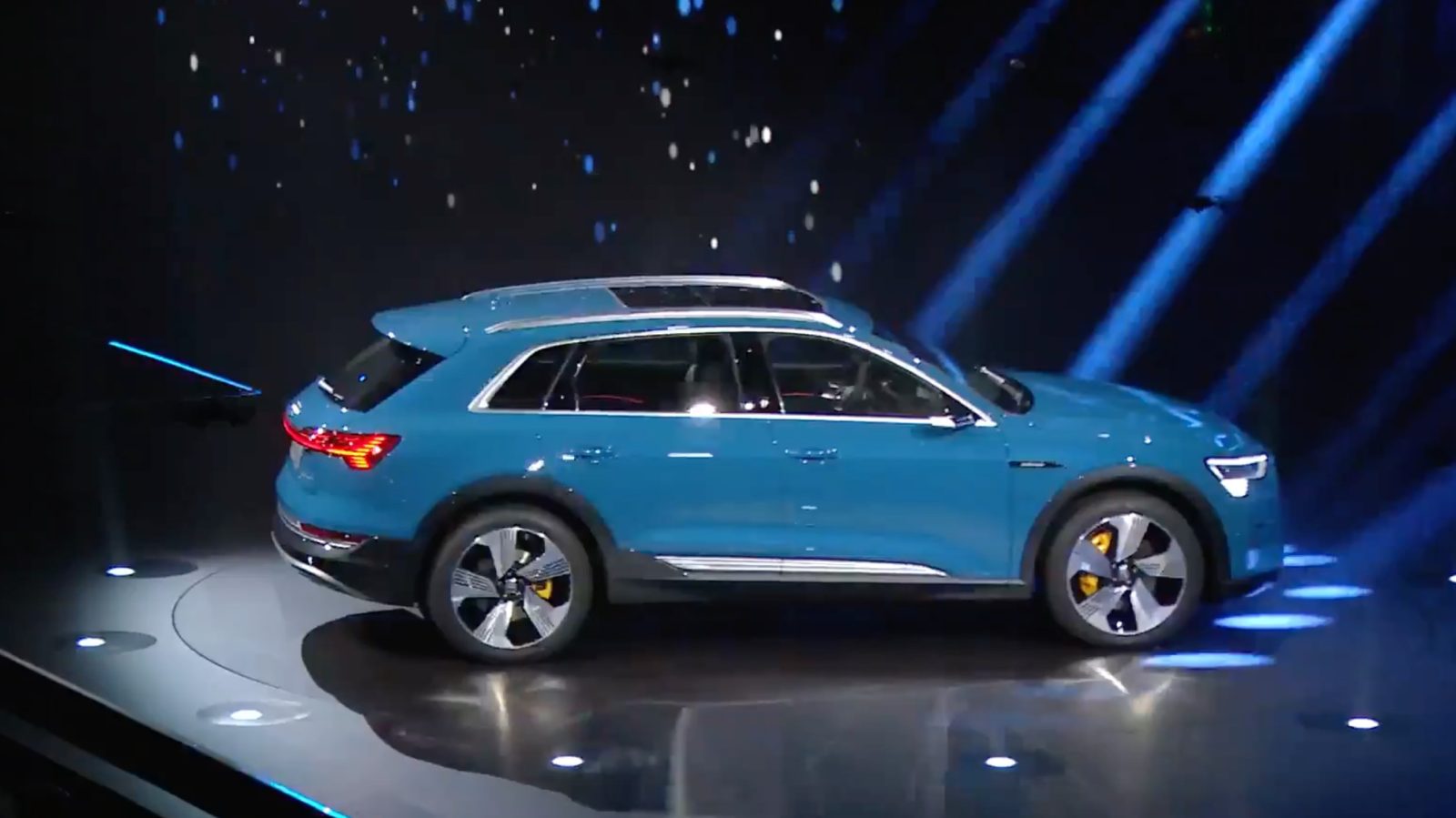 After years of teasing with concept vehicles and prototypes, Audi has finally launched the production version of the e-tron electric SUV in the US.

We now have all the official specs and our first official look at the production version of the vehicle.

As we have been reporting over the last few weeks, Audi seemed to be pulling all the stops for the launch of its first next-generation production electric vehicle.

Last week, they started an advertising campaign for the e-tron electric SUV ahead of the launch event. Ads, for an all-electric vehicle made by a legacy automaker, are playing during the Emmys as I am writing this.

Now for the actual launch, they brought hundreds of people to San Francisco, myself included, loaded us up in a giant boat at Pier 3 and shipped us to the other side of the bay in Richmond.

We already had a pretty good look at the e-tron with the “camouflaged” prototype that the company has been showing around during its development program.

But now we saw the first production version without anything hiding its form and features:

Furthermore, Audi took over the Graham Civic Auditorium ahead of the unveiling in San Francisco to show the media and Audi dealers and employees the underlying technology that the automaker has developed to deliver the vehicle.

It weighs about 1,541 lbs (699 kg) and it is built mostly flat to fit at the bottom of the vehicle for a skate-like platform that has become somewhat standard with new electric vehicles.

The enclosure in the back of the vehicle is a little higher because it has a second layer of battery modules.

Audi built a water-cooled thermal management system that transfers heat through the bottom of the pack through a gel around each module.

The automaker claims that the thermal management system is enabling the e-tron to unleash all its power repeatedly without loss and to achieve its class-leading 150 kW charge rate.

But in my opinion, the most impressive feature of the battery pack is the integrated crash structure that is built to defuse the energy from a collision around the battery modules:

Audi didn’t want to release an estimated EPA range of the vehicle and instead only released the WLTP: 400 km.

As for the power, while you can indeed unleash it repeatedly, you can only do it in full under what Audi calls “boost” mode.

Both electric motors, one on each axle, are AC induction motors.

The rear one is capable of a 165 kW output, but 25 kW is reserved for boost mode. As for the front motor, it is capable 135 kW with 10 kW limited to boost mode:

Those are all good performance specs for a SUV of this size.

Where the e-tron differentiates itself when it comes to electric SUVs, and electric vehicles in general, is the fast-charging capacity.

In production electric vehicles today, Tesla has the leading fast-charging rate of 120 kW.

The California-based automaker enabled this through its battery pack technology and its own Supercharger network.

Now several charging station companies, including companies Audi is involved with through its parent company Volkswagen, like Electrify America and Ionity, have started deploying stations with higher charge rate from 150 kW to 350 kW.

Audi becomes the first to take advantage of those new stations with a production passenger vehicle.

But like any other electric vehicle, most of the charging will be done at home and overnight. For that, Audi has included a 11 kW onboard charger. The automaker also plans to offer a dual onboard charger option to take advantage of higher-powered level 2 chargers.

Buyers will have to different mobile charger options when buying the e-tron:

The “Connect” version will enable smart capabilities like time-of-use charging as well as interfacing with a smart solar inverter to charge with solar power if the location is equipped with a solar array.

As an option, Audi will also offer its own level 2 home charger: 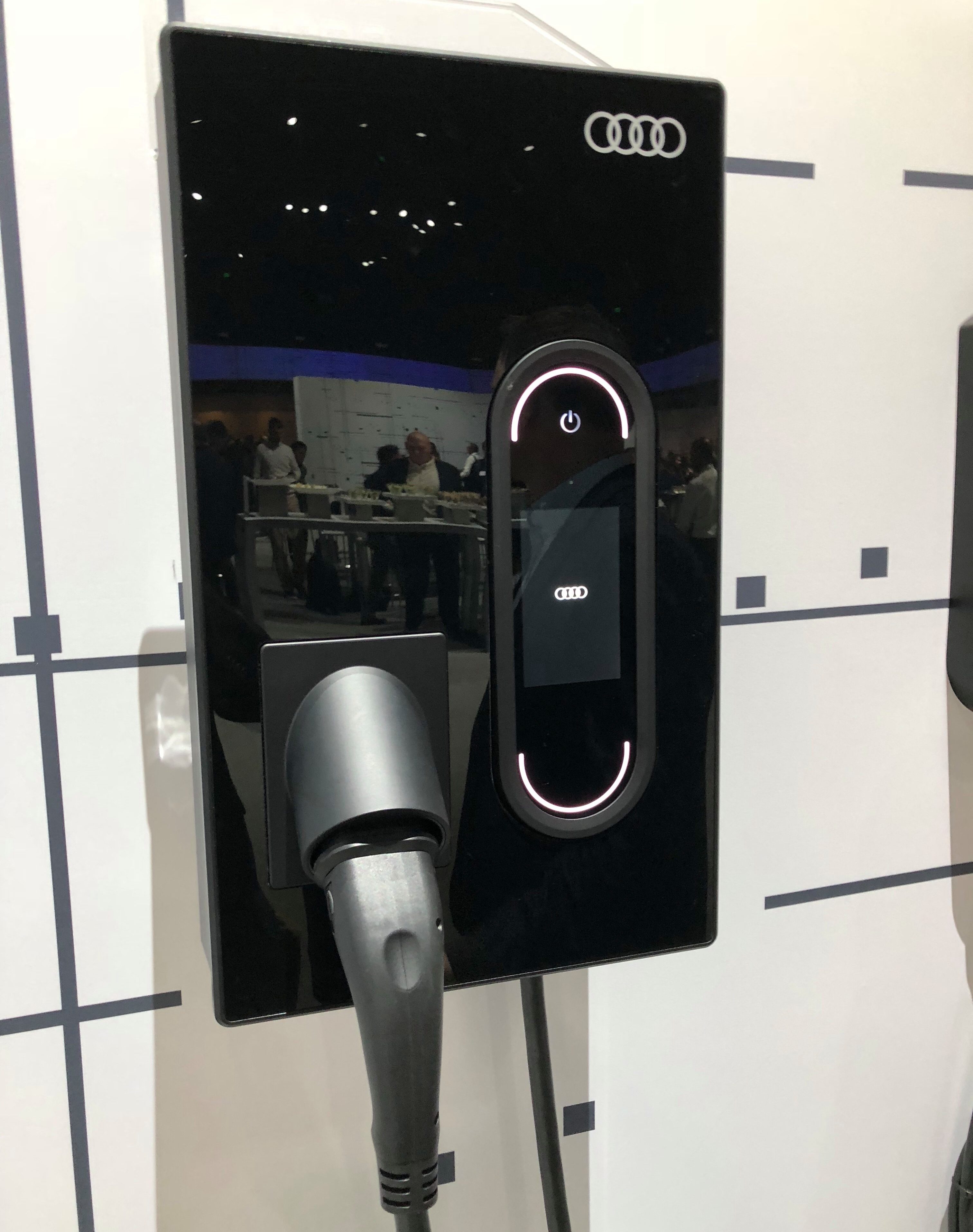 To complete its charging offering, Audi is also planning some products based on “second-life” battery products.

The automaker is evaluating the possibility to reuse older battery modules to build mobile chargers with energy storage capacity that could be used in applications like parking lots to move chargers around.

The feature enables Audi to shave a few points off its drag coefficient and improve efficiency in the process.

It is only available where the regulation allows it, which is only in Europe right now, but Audi said that it is currently lobbying for it to become legal in the US. In Europe, it will be a 1,400 euros option.

The mirror is replaced by a camera in a smaller enclosure and an OLED display inside the door. We were able to play with a demo of the feature and it looks fairly well executed:

Hopefully, the feature proves effective and safe enough to impress regulators in order to eventually becomes more widely adopted since it has the potential of increasing the efficiency of all vehicles.

We also had the chance to play with Audi’s infotainment center for the e-tron. It is very much like what you would find in a Audi A8, but with a few more features to manage the electric vehicle:

To be clear, this is not our review of the Audi e-tron. We have yet to try the new electric vehicle (hopefully soon). It’s more of an overview of what Audi is bringing to market.

I think there’s a lot to be excited about for EV enthusiasts. From a technology standpoint, it looks like a solid new all-electric vehicle from a legacy automaker.

It’s not a weirdmobile and it pushes EV fast-charging forward in at least an incremental way. Despite still being entrenched in internal combustion engine vehicles, it’s a vehicle that Audi is clearly proud of and it is actively trying to sell it.

If anything, I’ve come out of the event convinced that Audi is serious about making all-electric vehicles.

Now let’s try it. We will report back when we do.