Despite beginning sales of electric scooters in 2011, Flux Mopeds has done a pretty good job of flying under the radar.

But now with sales in 15 states and rave reviews of their EM1 electric moped, the Wisconsin company is ready to stand up and be seen.

Electric scooters and mopeds are all-the-rage in Europe and Asia. However, they are still catching on here in the US.

But with a host of advantages over cars and even gas-scooters, electric moped sales are starting to pick up momentum.

I’m admittedly a big fan of any two-wheeled EV, and electric scooters are at the top of my list. I write about them all the time, I’m currently commuting almost entirely on an awesome GenZe 2.0 scooter, and its basically my job to stay up-to-date on the latest models. That’s why I was so shocked to only learn about Flux Mopeds last week.

Apparently though, that was by design. Unlike most electric bike or scooter companies these days, who produce a couple prototypes and then try to pre-sell thousands on Kickstarter or Indiegogo, Flux Mopeds has been taking a steady, measured approach to expanding their operations. 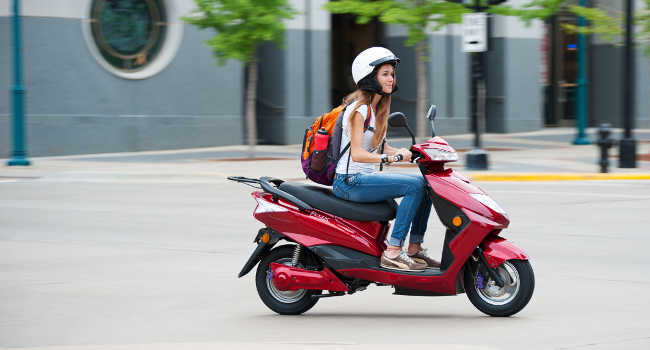 CEO and Founder Matt Brueggeman spoke to me recently about how he started Flux Mopeds.

Matt graduated from the University of Wisconsin with a degree in Chinese International Studies. After graduation, he moved to China where lived for seven years.

During the 2008 Olympic Games in Beijing, Matt was struck by the sheer number of electric scooters he saw zipping around the streets silently. Commuters were flying around the city, avoiding the notoriously congested traffic and creating zero emissions. Having seen the potential that these little electric vehicles could provide, Matt wanted to bring the concept back to the US. Together with a friend, they hashed out the plan for Flux Mopeds on the couch with the Olympics playing in the background.

After building a team to include engineers and designers in the US, China and around the world, they found a manufacturing partner in China. While many electric scooter companies simply source a pre-built model on the Chinese market and slap a new sticker on it, that’s not what Matt wanted. Together with his team, they developed the new Flux EM1. The company owns approximately 75% of the IP incorporated in the scooter, making it a creation all their own. 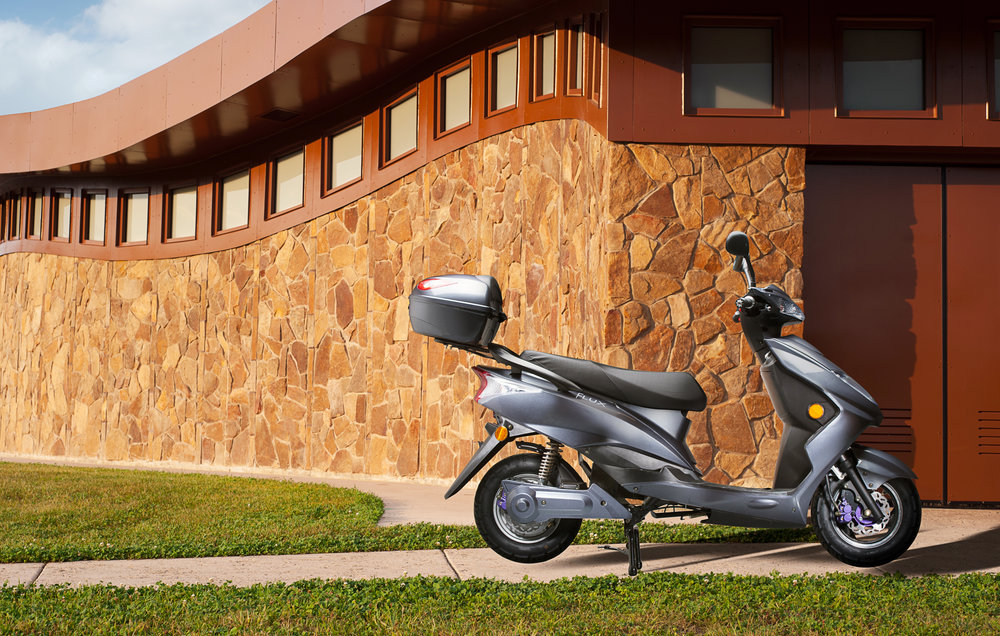 Between the proper team-building and Matt’s local language skills allowing him to ensure their Chinese factory was always on the same page, the company was able to develop a new electric scooter specifically designed for urban use in American cities. While currently manufactured in China under Flux Moped’s supervision, the company hopes to move production to the US once volume grows sufficiently.

The Flux EM1 scooter is now in its third generation, as the team has continued to make slight improvements over the years.

The EM1 is a two-seater designed to reach 38 mph (61 km/h). It can also be regulated to 30 mph (48 km/h), which can help it achieve moped-status in many states. In my local Massachusetts, the EM1 regulated to 30 mph can be registered as a moped, meaning it doesn’t need a license plate and I could ride one with just a regular driver’s license. Legally, I wouldn’t even need to buy insurance, though it’s probably a good idea anyways.

A digital instrument panel, mirrors, high/low beam lights, turn signals, DOT certification and a VIN make it register-able in all 50 states. However you’ll have to check your local laws to determine what class of motor vehicle it fits into, generally either moped or light motorcycle.

The EM1 is designed purely as an urban vehicle, so its range is sufficient for city travel. It has space for two batteries, each of which is rated for 1.44 kWh. A single battery will provide around 25 miles (40 km) of range, while two batteries increase that to 50 miles (80 km). 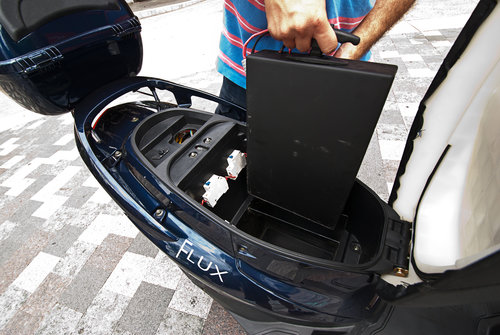 The Flux Mopeds EM1 has a rear-mounted 1.5 kW hub motor. That’s equivalent to 2 horsepower, so don’t expect to burn rubber. But again, this is a city commuter, not a race bike. That being said, 2 hp in a 182 lb (82.5 kg) vehicle is nothing to scoff at. The GenZe 2.0 scooter I’m current riding has a 1.9 hp motor and pulls out faster than cars next to me when the light turns green, so its plenty peppy for city riding.

The EM1 can also handle slopes up to 20%, albeit at a slower 25 mph (40 km/h). Rider weight is limited to 330 lbs (150 kg), which should fit most riders, though might make carrying a passenger a bit more selective based on the combined weight.

The Flux EM1 costs $2,300 for the single battery model, with an upgrade to the double range version costing an additional $910. Shipping is free for customers in Wisconsin and California.

Flux Mopeds has taken a measured approach to expanding operations. They’ve opted to start small and ensure that their concept works before charging the cliff to expand the business. Over the years, they learned what worked and what didn’t. Based on their experiences, they’ve evolved the company to better suit the needs of the market.

As Matt described to me:

“We founded Flux Mopeds in 2011, and we’ve been working in this for quite a while. We started as a traditional dealership between 2012 and 2015. During that time, we retained regular inventory. And it didn’t work, to be frank. It didn’t work. It was very difficult to maintain operations in a specific dealership. And then we started to better understand the market interest, and what people were using the Flux EM1 for and what they were interested in.”

As it turned out, despite having some success locally in Wisconsin, Flux Mopeds was starting to garner interest from urban commuters all over the country. The company found that most of their customers were spread around different city centers, where they wanted an EM1 for local commuting, riding on surface streets, running errands in the city and other urban trips. 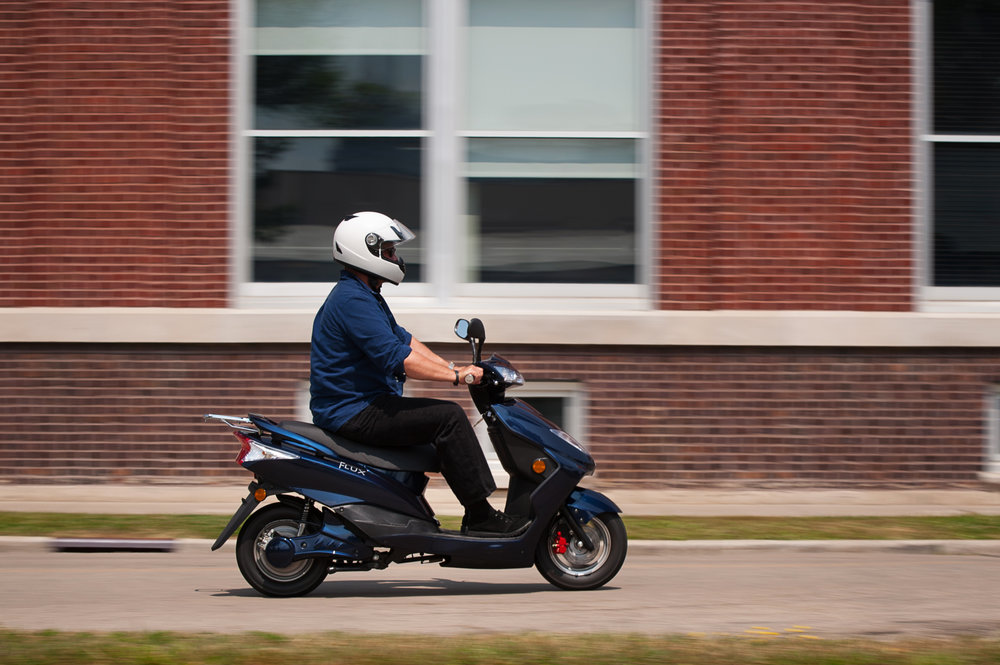 To better reach customers, Flux Mopeds reworked their model. Instead of maintaining a physical dealership in their home base in Wisconsin, they now manufacture-to-order for customers all over the country. Flux handles all of the logistics to make the process as easy as possible for customers. Due to the manufacture-to-order process, wait times can be as much as 3 months from initial deposit. However, Matt says that the wait hasn’t been an issue for most customers:

“The vast majority of people want a fun, reliable and affordable vehicle, and we can offer that. Over hundreds of thousands of miles of testing we’ve found that our vehicle is so reliable that a local dealership hasn’t been necessary for our customers. Shipping is not very expensive and we provide all of our services that are required remotely, so people have not had an issue with purchasing online and waiting.”

For occasional service issues, such as replacing a flat tire, Flux Mopeds provides helpful documentation and support to walk an owner through the process. Nearly all regular service and maintenance tasks can be performed by the owner. And if customers don’t feel comfortable performing some tasks themselves, most scooter maintenance can be handled by any reputable scooter or motorcycle service center.

Flux Mopeds is also developing a nationwide network of partners that can offer service for their vehicles while still under warranty, which includes 2 years for the entire scooter and 3 years for the motor and controller. Interestingly, while one might expect brake pad changes to be a regular service issue, the strong regenerative braking of the scooter means that brake pads can easily last 5-6 years due to rare usage. 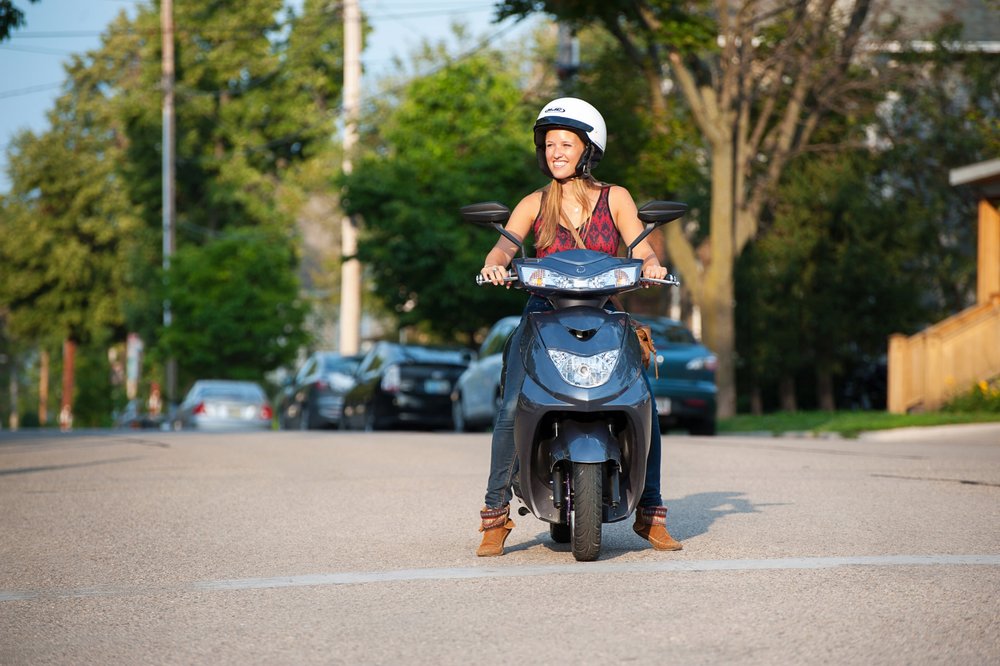 Despite taking a few years to find a system that works for the company and for customers, Flux Mopeds is now expanding their operations. The company now has their electric scooters on the roads in 15 states and counting. Their factory is churning out the latest model of scooters and Matt is preparing to expand their market presence.

With so few sources for electric scooters in the US, Flux could be one of the early birds to the growing electric scooter and moped trend in the US. They join a select but growing field. In addition to the previously mentioned GenZe 2.0 electric scooter, NIU has also plans on bringing their new electric scooters to the US. CSC in California also offers a $2,500 light electric motorcycle with moped-level specs. But among all of these options, Flux is still the winner on price.

What do you think? Would an electric moped like the Flux EM1 work for your city? Let us know in the comments below.