Electric moped sharing programs expand around the US – Are Americans ready to become scooter riders?

Electric scooters, ride-on scooters, mopeds – whatever you want to call them – aren’t exactly commonplace in the US. It wasn’t long ago at all that spotting these two-wheeled EVs in America’s cities was nearly impossible.

But in Bob Dylan’s ironically timeless words, “…the times, they are a’changing.”

Believe it or not, electric scooters are starting to pop up in cities all over the United States.

Sure, sales of electric scooters still aren’t very impressive, with somewhere around 10,000 units sold across the US last year. But even though Americans aren’t running in droves to buy electric scooters, they are lining up to rent them.

Scooter-share programs offering to rent electric scooters to the public via a smart phone app are opening across the US. No standing in line, no long training sessions, no hassle.

The newest company to join the party in the US is Muving, a Spain-based electric scooter share.

Muving is rolling out in Atlanta, with plans to open up shop in Miami next. 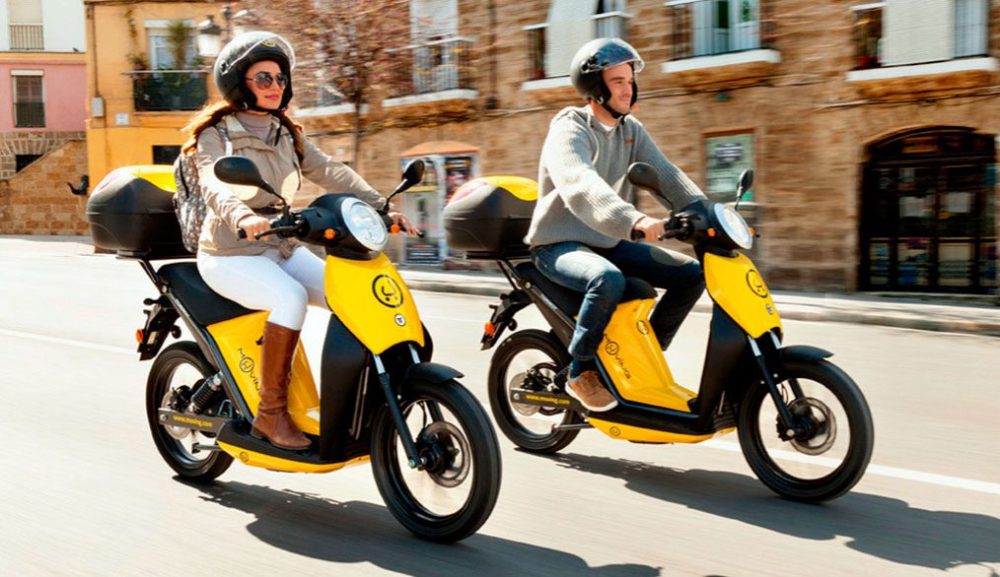 Muving’s electric scooters can be rented with a smartphone app for just 35 cents per minute, though they offer new riders their first 30 minutes free in the classic “your first time is on the house” strategy to get new users hooked.

Much like the dockless electric kickscooter companies such as Bird and Skip that are currently spreading across the country, Muving’s scooters are simply parked out in the open around the city. Users ride them wherever they need to go (within the city’s service area), then simply park them anywhere for the next rider to rent – no special docking stations needed. 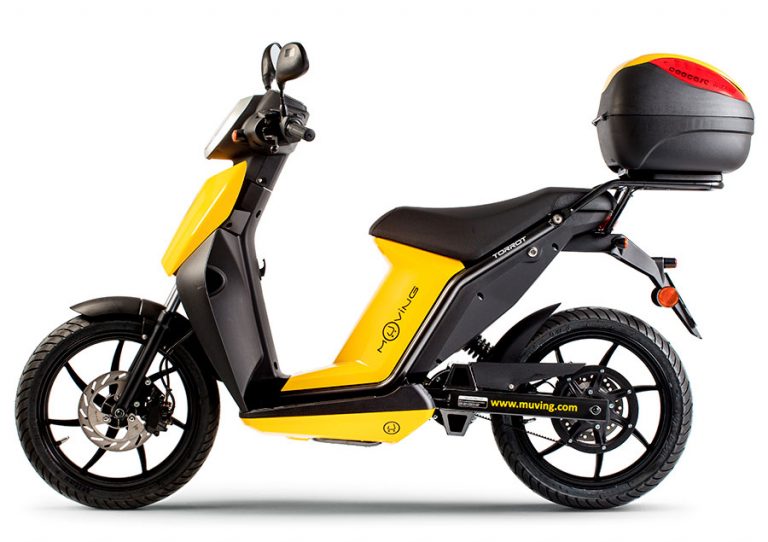 Muving’s strategy is far from unique. This type of commuting freedom is also being successfully employed in US cities around the country by other electric scooter share companies.

Scoot was founded in San Francisco, where they’ve been in the game since 2012. Scoot uses the popular GenZe 2.0 electric scooters. Prices vary depending on your trip, but they are generally around 30 cents per minute for the first 15 minutes and 10 cents per minute afterwards.

So far, the Scoots have proven to be incredibly popular in San Francisco, and the company claims that their scooters have covered nearly 5 million miles and counting in the city. 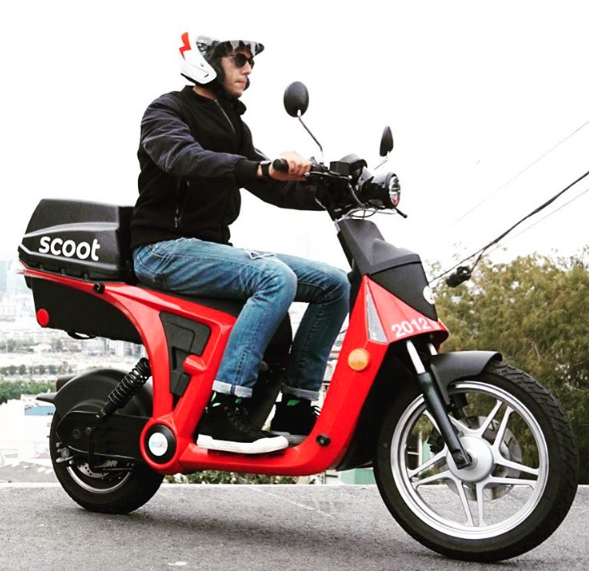 In fact, Scoot has proven to be popular enough that they have begun expanding internationally by opening their newest location in Barcelona, perhaps as a shot across Muving’s bow – or, err… fender?

And it’s not just the coasts of the US that are getting the electric scooter treatment. The Midwest now has their own scooter share with Pittsburgh-based Scoobi. The company is opening their doors with a business model quite similar to both Muving and Scoot, and even use the same GenZe 2.0 scooters as Scoot. 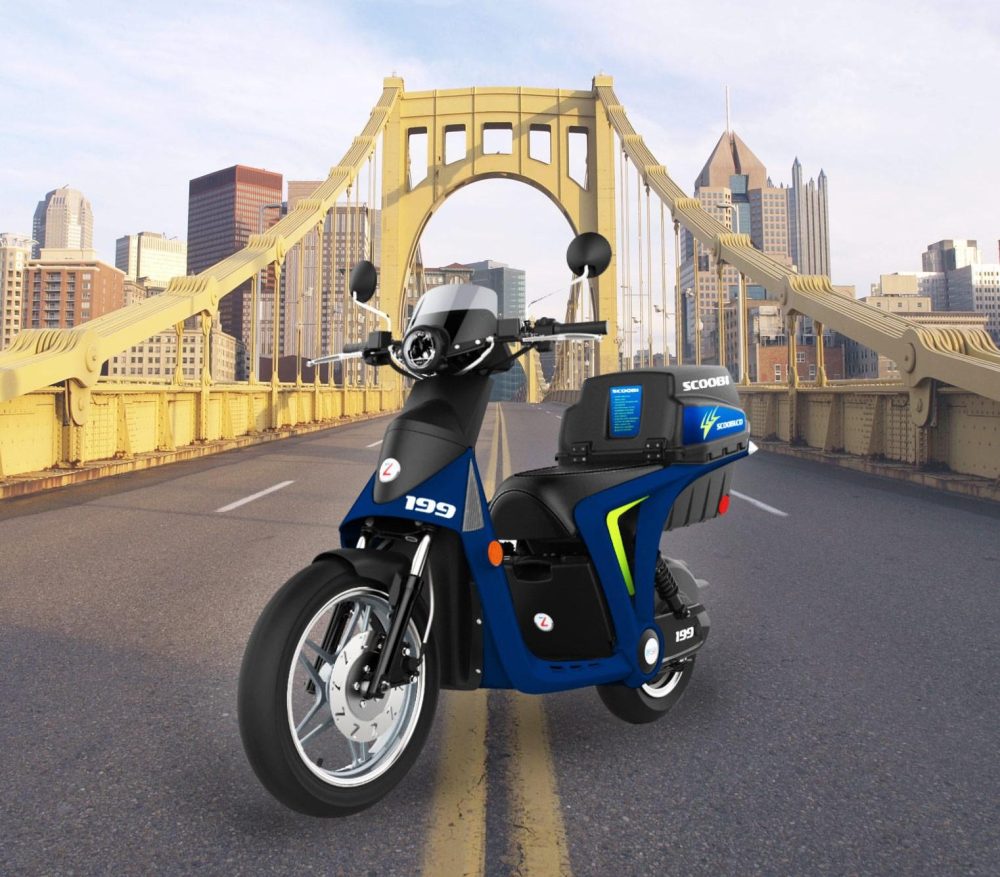 What are scooter shares good for?

All of the scooters described above travel at a max speed of 30 mph and are specifically designed for urban transit. They aren’t speedsters, but they are great for city streets where traffic rarely gets above 35 mph. I don’t know about you, but that pretty much sums up the center of just about every city I’ve ever lived in.

The main advantage of these electric scooters is their convenience. For less than the cost of an Uber or Lyft, you have instant access to environmentally friendly transportation to take you all over the city. You don’t have to pay for parking, you don’t have to sit in traffic, and you don’t have to worry about vehicle ownership/insurance/registration/inspections, etc.

The rental companies take care of everything and use simple apps to show you exactly where your closest scooters are, how much charge they have, and how much each trip will cost. They even come with helmets in the cargo space so you don’t even need your own.

What does this mean for the US?

The fact that the number of electric scooter share companies is quickly expanding demonstrates an obvious trend in the US. The same trend was witnessed over the last 6 months or so with electric kick scooter share companies. Bird, Lime, Spin and others began offering nearly identical dockless rental services, and now there are over a dozen companies competing for a slice of the pie. Bird is even raising more funds at an apparent valuation of $2 billion – and the company isn’t even a year old.

This explosion of two-wheeled EV rental companies is a good sign for the new crop of domestic electric scooter and moped shares. Scooters and mopeds are clearly one of the most common forms of urban transportation all around the world – except for America. So far, most Americans simply haven’t been ready to buy a scooter and become a “scooter guy”. But with the new option for scooter rentals offered by a growing number of scooter share companies, that might be ready to change.

Recently, many San Franciscans began buying their own electric kick scooters after the city temporarily kicked out the local kick scooter share companies pending new legislation and permits. Similarly, the acceptance of electric scooter shares could be one slippery slope away from Americans going full “scooter guy” and turning the two-wheeled fun-mobiles into their main form of urban transportation.

What about you? Are you ready to commute on an electric scooter? Let us know in the comments below!