ChargePoint, already one of the biggest makers and operators of charging stations, announced a new pledge to accelerate the deployment of electric vehicle charging infrastructure by having 2.5 million charge points in operation by 2025.

They made the announcement at the Global Climate Action Summit today.

Pasquale Romano, president and CEO of ChargePoint, commented on the announcement:

“Our commitment to deploy 2.5 million charging spots by 2025 comes as the company embarks on the most significant period of growth in our history and in the midst of a revolution in transportation. The time for transformative change is now, and broadly distributed, substantial and immediate investments in charging infrastructure are necessary to usher in the future of e-mobility. One hundred percent of what we do is focused on developing technology that enables cleaner transportation, and ChargePoint is proud to play a critical role in facilitating the transition to electric mobility, and supporting the Summit’s mission to reduce greenhouse gas emissions worldwide.”

For ChargePoint, it represents a significant fifty-fold increase in the next seven years since they currently have deployed just over 54,000 charge points. 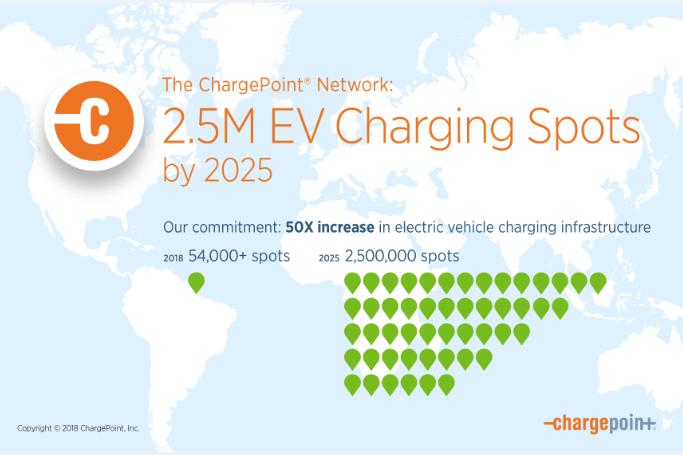 Therefore, they plan to deploy 50 times more charge points in the next seven years than they did during the first 10 years since their founding.

In the last two years, ChargePoint has been making a lot of moves to position itself for accelerated growth.

They plan to expand in Europe with those new funds and they have a deal to deploy 200 of their new ‘up to 400 kW’ electric vehicle charging stations in the UK.

Earlier this year, the company said that it now delivers 8 GWh of electricity in over 1 million electric car charges per month.