Tesla Model 3 is finally getting a badge: Dual Motor and underlined for Performance version

Tesla always had a fairly simple badging scheme for its vehicles since the introduction of the Model S and later on the Model X.

But that changed with the Model 3 as Tesla tried to distance itself from the energy capacity of its vehicles, which had so far been the main part of its badges.

Yet, the Model 3 is now getting its own badge.

The badging scheme for the Model S and Model X was fairly simple.

If the vehicle had a dual motor powertrain, it got a ‘D’ after the amount of kWh. For example, it would read ’85D’.

If the vehicle had a ‘Performance’ powertrain, it got a ‘P’ before the amount of kWh. For example, it would read ‘P85’. It could also be both like ‘P85D’.

Eventually, Tesla complicated things a little by adding an underline to the badge for vehicles with the Ludicrous upgrade.

But when launching the Model 3, Tesla wanted customers to stop focusing on the energy capacity of its cars.

To this day, Tesla never officially confirmed the energy capacity of the two Model 3 battery packs, which it instead calls ‘Standard Battery Pack’ and ‘Long Range Battery Pack’.

Though we have independently confirmed the capacity as ~50 kWh and ~75 kWh respectively.

As I understand it, the logic behind it is that it could be confusing to some customers, especially more mainstream ones as the Model 3 is more mass-market than Tesla’s previous vehicles, because the Model 3 is a more efficient vehicle than the Model S and it can get more range on the same energy capacity.

Since adding ‘Long Range’ or ‘Standard’ badges would be quite weird, Tesla instead decided not to include any badge at all… until now.

With the recent updates to Model 3 options, Tesla also released the first image of the first Model 3 badge: 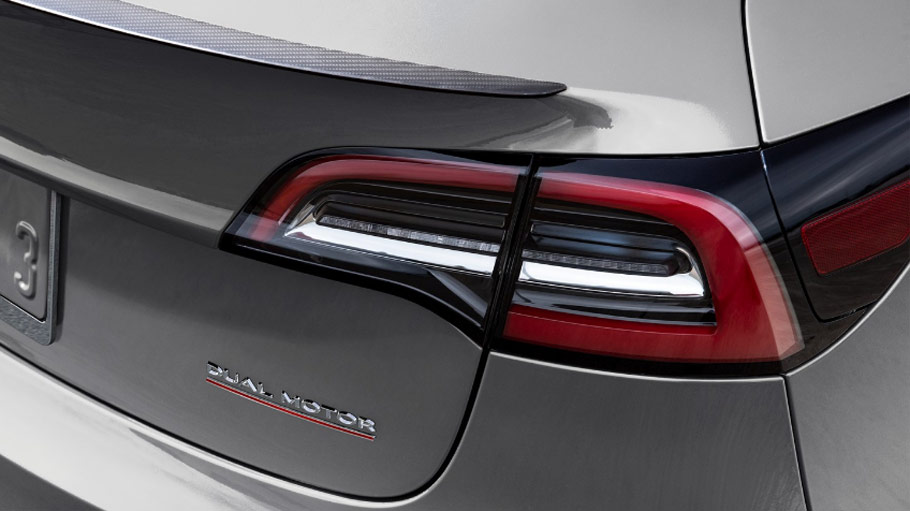 It looks like Tesla is identifying ‘Dual Motor’ vehicles and it also added an underline, which seems to represent the ‘performance version’ instead of the Ludicrous update.

What do you think of the Model 3’s new badge? Let us know in the comment section below.