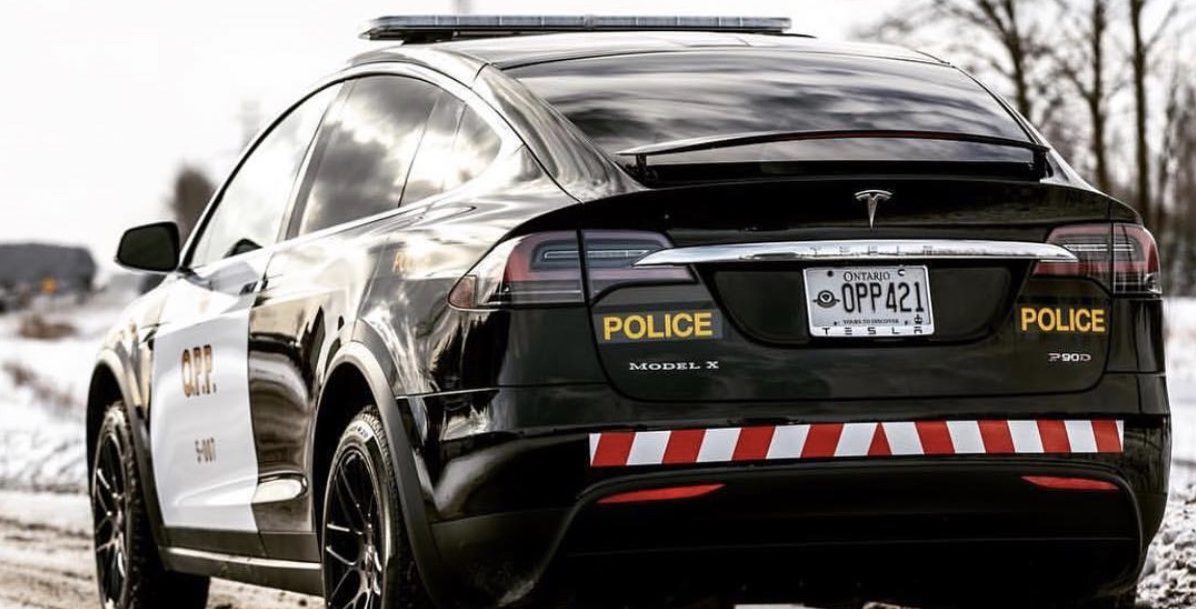 The Swiss know long-term cost of ownership well and one police force in Basel figures it will save a significant amount of money over the life of their police cruisers by swapping out diesel vehicles with all-electric Model X 100D SUVs, which Tesla claims is the “World’s fastest, safest and most versatile SUV”.

Tesla vehicles are becoming strangely popular with police departments all over the world.

The Ontario Police also recently received a brand new Model X – pictured above – and now a police force in Switzerland is on board with Tesla’s all-electric vehicles.

But Tesla’s vehicles are still quite expensive for police use.

For the Basel police, the math works a little like this: They are spending about 1 million Swiss Francs (105% dollar value) on the lot after outfitting them for police action. That’s about 150,000 Francs a piece which is about 50,000 Francs more than the current diesel models.

The Swiss Police (Polizei Schweiz) justify the 50% increase in the acquisition cost of their cruisers:

The cantonal police of Basel-Stadt will replace the diesel vehicles for the alarm labels with electric Tesla Model X-100D which satisfies both economical and environmental protection, due to high payload and plenty of storage space, as well as very good handling characteristics for use as an alarm pickup vehicle. The total cost of ownership (TCO) is lower, despite higher initial cost compared to today’s cars. The planned replacement of diesel combined vehicles with the Tesla Model X-100D brings several advantages in terms of economic efficiency, practicality and ecology. In view of the exemplary role of the administration aimed at environmental protection in the Cantonal Legislative Plan 2017-21, the cantonal police has clarified whether a fully electric vehicle is available and suitable for the alarm signal on the market. A thorough investigation and practical tests have shown that the Tesla X-100D meets the requirements.

Consider fuel costs and maintenance. Telebasel.ch interviewed Martin Schütz, a spokesman for the cantonal police of Basel-Stadt who noted that today’s alarm pick-up vehicle, including its extension, would cost CHF 91,000. The police say the additional cost of 49,000 Francs offsets the higher acquisition costs with significantly lower costs for operation and maintenance and a higher resale value.

Practicality is also an obvious concern. Schütz noted, “A vehicle that is suitable for an alarm needs, on the one hand a sufficient payload and plenty of storage space due to the equipment of the police officers. Ideally, the vehicle also has four-wheel drive. This would also include the environmental ideals which would make the administration role models.”

The average range required on one of Basel’s cruisers is 200 kilometers or 124 miles per day which is easily reached with a Model X 100’s official EPA of almost 300 miles. Even with a few high-speed pursuits, the Model X 100D should be able to do a day’s work without a charge. IWB would install two charging stations each at the police stations Kannenfeld and Clara as well as in the arsenal.

BZBasel got some more specifics. “A conventional vehicle brings the police from A to B. What the Basel police is now buying is a laptop on wheels,” says Theo Karafantis. Thus, the police are also prepared for future challenges, such as in the fight against drones. Additionally, the vehicle can also be digitally upgraded in the future. “Even with a simple traffic accident, the on-board computer will make it much easier to record the data,” says Karafantis. “And also not to forget: the Basel police can refuel the new emergency vehicles in future at the fast charging stations of Tesla. However, the nearest Supercharger is currently in Pratteln.”

The move isn’t without its detractors however, “It is incomprehensible that almost one million francs are purchased for vehicles that have not yet been tested in everyday police life, and are otherwise not commonplace.” criticized Councilor Felix Wehrli, who works as a detective at the Criminal Investigation Department. He wants to know, for example, why not conventional car manufacturers such as BMW or Mercedes were selected, which usually also has cheaper vehicles on offer.

Basel Police will be the first in the world to have Model X Police Cruisers says Karafantis, although Ontario, Canada noted above might beat them to the punch.

Police can be seen as highly specialized fleet operators which are prime targets for electric vehicles’ lower Total Cost of Ownership (TCO). With the Model X, the Basel Police get a much faster car, with better storage, 4 wheel drive, built in technology+upgrades, quietness (for sneaking up on the bad guys) and obviously the cost savings of electricity. Plus, I’m sure the cops will enjoy the ride.

Besides, what criminal wouldn’t appreciate being put in the back of a Falcon Wing Model X and driven swiftly and quietly to the station?