After the first Tesla Model 3 in Canada was spotted on the west coast earlier this week, now another Model 3, apparently a test vehicle, was spotted all the way across the country in Montreal.

Tesla seems to be putting a lot of mileage on the Model 3 these days.

Another vehicle reportedly driven by Tesla employees was spotted in several different countries in Europe earlier this month.

And now we have two vehicles in Canada.

The one spotted in British Columbia earlier this week appeared to be an older release candidate, but this one in Montreal could be a production unit – though it also features additional sensors and manufacturer plates registered in California – leading us to believe that this is a test vehicle.

Eléna Pageon spotted the electric vehicle, which is likely the first Model 3 in Quebec, on a side street near ‘Le Manoir D’Outremont’ in Montreal today. She shared a few pictures with us: 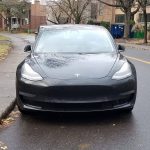 As previously mentioned, it has manufacturer plates – meaning that the vehicle is operated by Tesla – and it features additional sensors on the b-pilar apparently connected to a module behind the front seats:

Being from Quebec, I am really excited about Tesla testing the Model 3 in our little corner of the world.

Unfortunately, this doesn’t tell us anything about the upcoming launch of the vehicle in Canada. Without Canadian license plates, it can’t confirm that the vehicle has been homologated in the country yet.

Early Canadian reservation holders are still being told “late 2018” for their delivery timeline.

It’s not clear if the vehicle drove all the way from California for long distance driving tests, though we have already received reports of Model 3 test vehicles completing the cross-country road so that wouldn’t be a first.

As we reported with the sighting in BC, it could be there for winter driving tests – though Tesla already did some of those tests in New Zealand earlier this year. Right now there’s no snow in the region, but it is getting quite cold and Tesla could get some good data about the battery in a colder climate.

Snow is also imminent and therefore, it could get some good test there too if it sticks around for a few more weeks.

Hopefully, it does and I get to catch a glimpse of it myself. Let me know if you guys see it around.