While electric vehicles that can take over 50 kW of charging power are currently rare, aside from Teslas and electric buses, the charging infrastructure to prepare for them is already starting to be deployed.

Now ABB is unveiling its own entry in the sector by launching its high power 150-350 kW electric car chargers.

The tech giant released the first few details and images of the system in a press release today and it will be unveiled in full at the Electric Vehicle Symposium and Exhibition (EVS30) in Stuttgart next week.

The system, which ABB calls ‘Terra HP High Power Charge system’, supports both the ChadeMo and CCS standards with an output of up to 350 kW, which is the highest currently installed.

ABB describes a base version of the system:

“The 375 A output single power cabinet can charge a 400 V car at full 150 kW continuously. The addition of Dynamic DC power sharing technology, allows a two-power cabinet charging system to charge a couple of EVs simultaneously, with up to 350 kW and 500 A, while dynamically optimizing the available grid connection and the power delivery to the two vehicles.”

They released this render of the charging station: 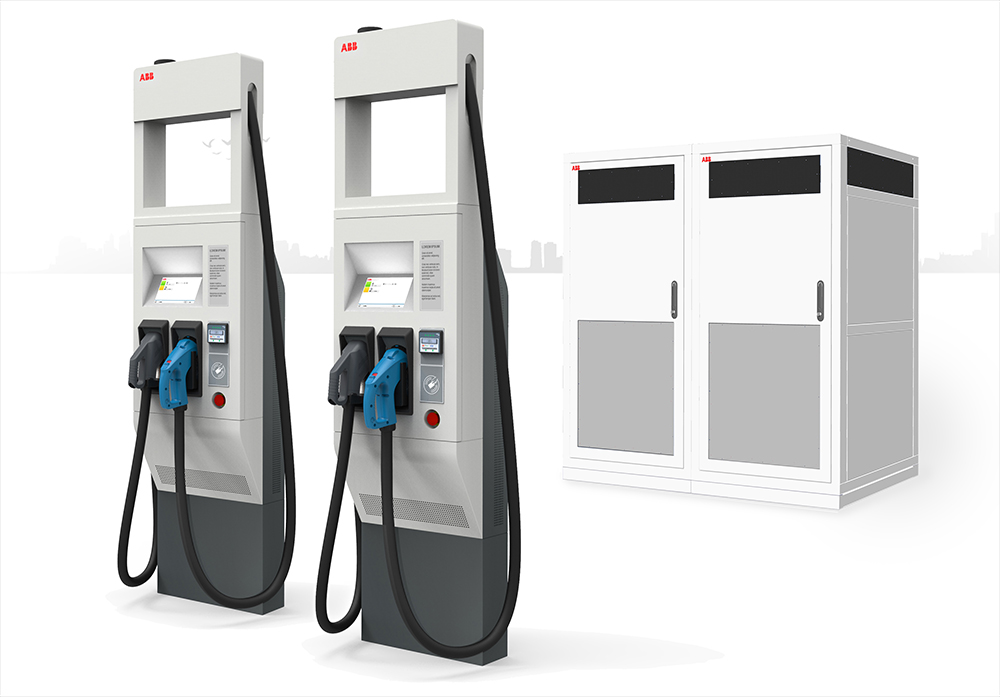 Frank Mühlon, Head of ABB’s Global Business for Electric Vehicle Charging, commented on the launch of the system:

“We are committed to supporting the expansion of electric vehicle charging systems across the globe to drive cleaner environments. Creating innovative state-of-the-art and energy efficient solutions which are scalable to expand and flex with our customers’ needs is at the heart of ABB’s philosophy.”

There’s no word on when those stations will start to be deployed, but that’s dependent on charging network operators since ABB manufactures the hardware and offers services for the charging stations but it doesn’t operate networks.

Like Chargepoint’s Express Plus system, it is modular and operators can decide to later add more charging cabinets for more power or charging stalls for more access points.

One could think that ABB is a little late to the game here since Chargepoint already started deploying those systems and Porsche also started building its new high-power stations, but ABB has been working with EVgo to deploy their first 150 to 350 kW system back in February.

It should certainly be reassuring for EV enthusiasts to know that the infrastructure for faster DC fast-charging is already being put in place despite the fact that no current electric car can support it – though we know they are coming.

In the meantime, they can be used for electric buses and trucks as well as for testing.