Porsche is gearing up to bring to production its first all-electric vehicle, the Mission E, within the next two years.

We now get a close look at the latest Mission E prototype as Porsche brought the vehicle to every automaker’s favorite market to first launch new electric cars; Norway.

As we recently reported, Mercedes, Audi, and Jaguar all turned to Norway to sell their first all-electric cars with thousands of reservations.

Now it looks like Porsche is preparing to do the same with the Mission E.

Last week, they brought their latest Mission E prototype to an exclusive event for dealers in Norway to get a good look at the vehicle ahead of its launch in the market.

Pictures of the vehicle from the visit in Norway leaked on a Norwegian Facebook group dedicated to the all-electric vehicle. It results in one of our best look at the premium sedan so far: 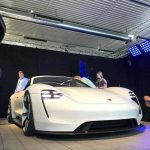 Some more information came out of Porsche’s visit in Norway, though it’s from the local team and knowing how information about upcoming new vehicles doesn’t necessarily propagate correctly and this vehicle is still in development, I would take the following with a grain of salt.

Porsche previously said that the production version of the car would resemble closely the Mission E prototype, but now we learn that there could be a few significant changes.

For example, Porsche Norway reportedly said that the suicide doors will not make it to production and that the sedan will have a 5-seat configuration instead of the prototype’s 4-seat.

Furthermore, the vehicle is expected to be offered with 3 different battery pack sizes.

On the other hand, Porsche previously only referenced one figure for the range of the car. They said that they are aiming for the vehicle to have “over 310 miles of range” (500 km) on a single charge, but being based in Germany, Porsche is likely talking about the New European Driving Cycle (NEDC), which is much more forgiving than the EPA rating and doesn’t really reflect real-world range. It’s should still have a more than decent range around 250 miles.

If that’s the top range, the smaller battery pack version for the base price of “around $86,000” is likely going to feature a shorter range.

We will likely know more next year when Porsche is expected to launch the production version, which should hit the market in 2019.

In preparation for the launch, the automaker recently started deploying its new ultra-fast charging stations to support the new vehicle and its 800-volt charging system.

The Porsche Mission E is an all-electric concept…