Tesla is building a new biggest Supercharger in the world

Tesla is building two new 40-stall Supercharger stations in California that were expected to become the biggest in the world once completed… until now.

That new Supercharger station in Shanghai will alone help a lot toward that goal.

A new friend of the site, Jason Man, found the station under construction at the Lilacs International Commercial Centre in the Pudong district of Shanghai.

Jason shared a few shots of the station under construction today: 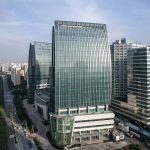 Being spread out in an underground parking lot, it’s not as impressive to look at as what Tesla is planning to do elsewhere with its new type of larger 40+ stall stations, but it’s not any less impressive technically.

This station will have to be extremely powerful in order to potentially supercharge up to 50 cars at the same time.

As you can see on Jason’s pictures, there are a lot of Supercharger boxes being lined up next to the stalls. If the system is as powerful as current Superchargers, the whole station could have a peak power output of over 3 megawatts.

The new station will help Tesla’s growing fleet in China. As we recently reported, Tesla China tripled its sales in 2016 to over $1 billion with over 11,000 deliveries and they continued their streak during the first quarter 2017 with a record quarter.

Furthermore, the California-based automaker says that it is working with the Shanghai government to establish manufacturing capacity in the region. Therefore, the company is definitely looking to expand its presence in Shanghai on many fronts.