We are starting to see more Tesla Model 3 being delivered to employees and insiders, who are the lucky first groups of people to get the new all-electric vehicle, but also the first to work through the early kinks of “production hell”.

Early Model 3 deliveries, which started in July with the first 30 units at Tesla’s handover event, are going to employees and company insiders, like early investors.

Despite the somewhat limited market that they represent, Tesla guided 1,500 Model 3 deliveries during the third quarter, which ends this month.

Based on the data we gathered, Tesla seems on track with more delivery sightings in California and more importantly, employees being confirmed upcoming deliveries across the country by the end of the month.

A reader was at Tesla’s HQ in Palo Alto last week and spotted over 10 Model 3 vehicles in the parking lot. Here are 5 in a row right next to the entrance: 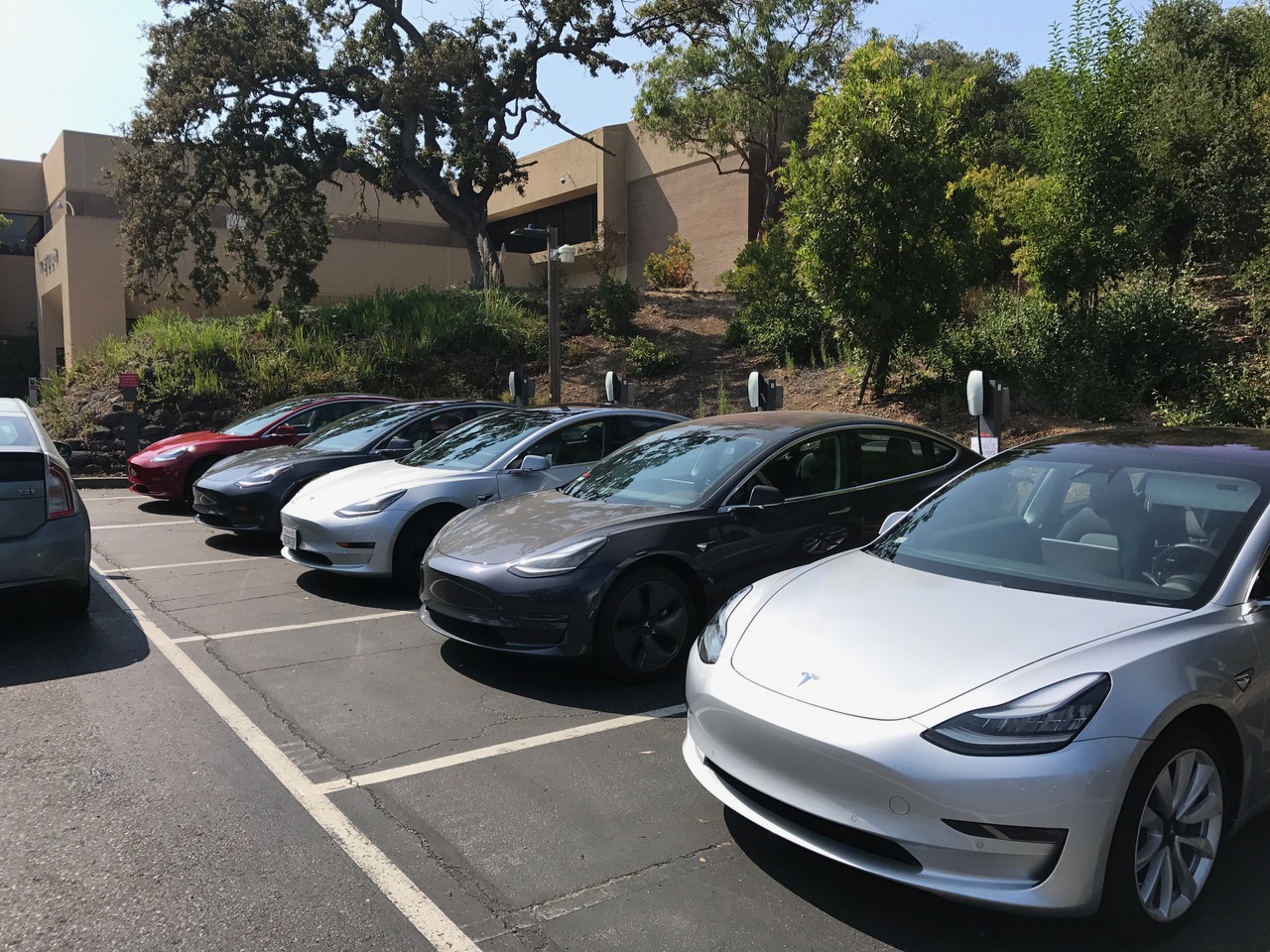 Other new Model 3 vehicles ready for delivery were spotted at Tesla’s Fremont factory.

Redditor /u/BatteryParking also spotted 9 of them prepped for delivery at Tesla’s new delivery center in Fremont near the factory:

Furthermore, as we recently reported, a Tesla Model 3 made its way all the way across the country in preparation for deliveries starting to go east and out of California, where they have so far been concentrated.

A Model 3 unit was even spotted in Europe yesterday and new vehicles for employee test drives were seen at other locations.

Those early owners have not shared a lot about their experience with the new all-electric vehicle so far and that’s not surprising considering they are all employees or insiders. As it’s expected with early production models, there are likely to be some issues, which is why Tesla planned on delivering the first few models to people who live near their factory in Fremont.

Apparently, early owners have been asked not to “review” or share too many details. Early Model 3 owner Jason Calacanis, who shared a few words about his experience before, called it a “friend-DA” – a play on non-disclosure agreement (NDA).

Though he seems pretty happy with the car according to this series of tweets last weekend:

1/ @TeslaMotors Model 3 NOT REVIEW: one of the 3 greatest tech products ever created, right alongside the PC/Mac & the smartphone/iPhone pic.twitter.com/hEbTxdpg2P

2/I'm under Friend-DA ( highest form of NDA), so I can't tell you anything specific so will keep this simple: Model 3 is a game changer pic.twitter.com/oGcMkX037V

3/Model 3 is @elonmusk's masterpiece, like Jobs who was doubted & derided by critics & curmudgeons before they held the iPhone & converted

4/founders should study Tesla's history; as a startup, the more progress you make toward an impossible goal the more some will attack you.

Indeed, the “attacks” seem to have accelerated recently. We reported this week that “Tesla is under attack by same ‘merchants of doubt’ behind tobacco industry and climate change denial.”

Back to Model 3, it looks like Tesla is still keeping those vehicles close and we won’t get much more details about the ownership experience before they get into the hands of regular customers, which might be as soon as next month if Tesla sticks to its schedule.