Tesla’s Supercharger network is having quite the eventful year. 2017 was supposed to be its first year under the new pay-per-use model, but Tesla delayed the change and then introduced a way to get around it for new buyers through the referral program, which is now the only way to get free access to the Supercharger network.

The loophole should expire by the end of the year and Tesla now introduces a new Supercharger cost estimator to better understand cost under the new pay-per-use model.

Just as a reminder, the default Supercharger access model when buying a new Tesla Model S or Model X is already the new pay-per-use model unless the buyer is being referred by an existing Tesla owners, in which case, it reverts to the old unlimited free access model.

Tesla placed a deadline for the end of the year on the referral program and therefore unless it’s updated, it would seem that every new buyer will be on the new pay-per-use model at that point.

As previously reported, the pay-per-use model comes with 400 kWh in free Supercharger credit every year, which means that owners will be able to recharge their battery pack 4 to 6 times at Superchargers for free, depending on the size of the pack, before being charged.

After those credits are depleted in any given year, that’s where the new cost estimator comes into play. Tesla updated its Supercharger page on its website yesterday to include the new tool: 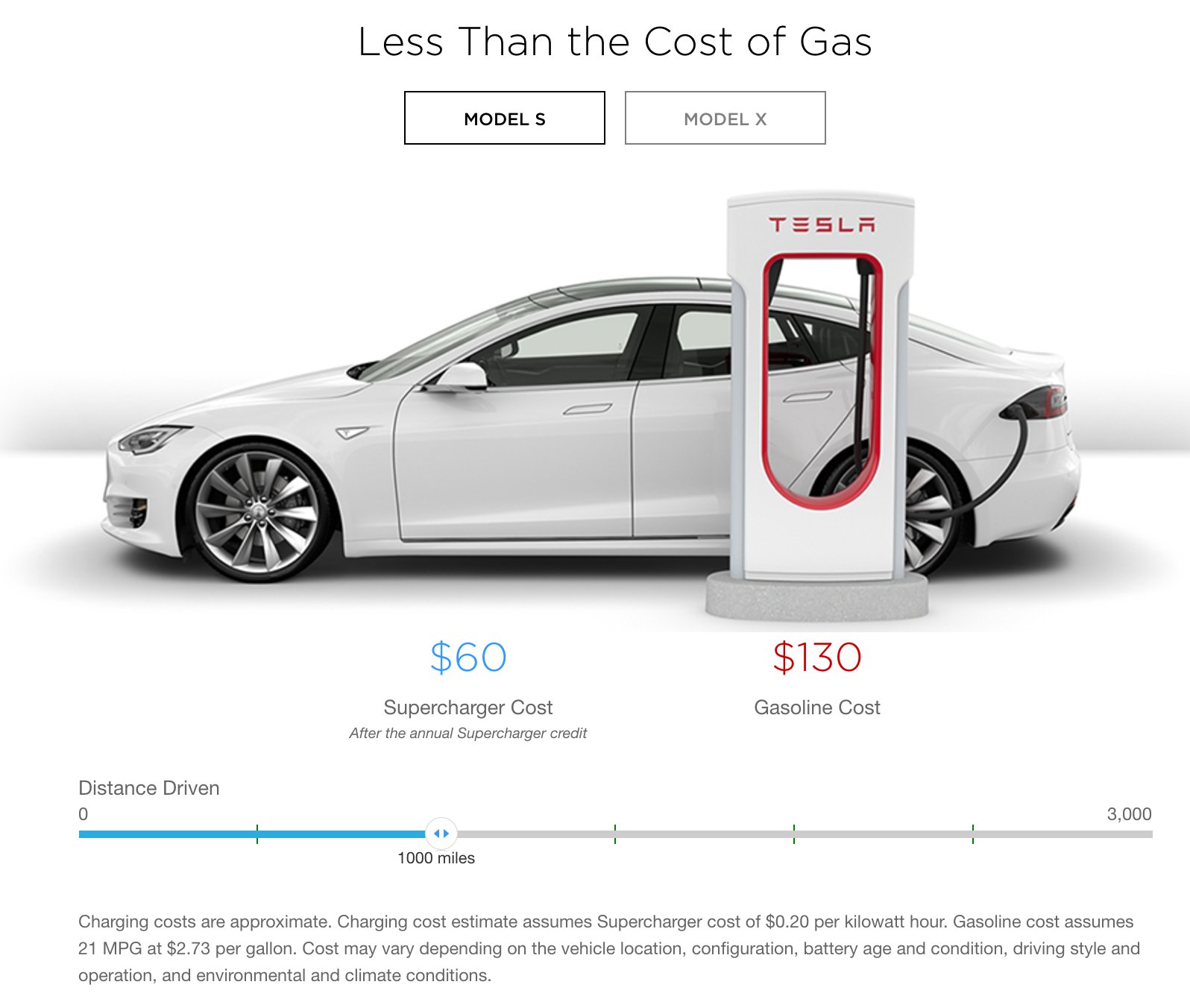 The cost per gallon ($2.73) is a little high for most of the US, but that depends on where you are located. It’s fair for California and Tesla is using the Supercharger rate of $0.20 per kWh, which is the cost in California.

The cost of the Supercharger changes based on its location due to the cost of electricity varying in different markets. For example, it’s significantly less ($0.13 per kWh) in Colorado – you can see your local cost here.

There’s also the issue that Tesla is not allowed to directly sell electricity in certain markets and therefore, the company instead charges by the minute of charging based on the charge rate (over or under 60 kW). It’s less than ideal and can result in a higher rate, but it appears to still be cheaper than gasoline as demonstrated by the estimator.

Another point to consider when calculating the cost of a trip is that the first 200 to 300 miles are generally done from a starting point other than a Supercharger, like at home for example. Your cost per kWh should technically be cheaper there since the US average is closer to $0.12 per kWh than $0.20.

The estimator also shows the difference between Model S and Model X since the latter consumes more energy per mile. The Model 3 is also expected to be under the pay-per-use model, but the cost should be significantly less since the vehicle is smaller and therefore, it is expected to be much more efficient.

Nonetheless, the estimator can give you a good starting point to calculate the cost of a road trip.