Most energy industry watchers saw the growth of energy storage to be inevitable in order to support renewable energy growth and to stabilize the grid, but deployment had been slow until now.

“Much of this growth can be attributed to a shift from short-duration projects to medium- and long-duration projects in the utility-scale market, along with a surge of deployments geared to offset the Aliso Canyon natural gas leak. Although, the industry shouldn’t get too comfortable, as with fulfilment of Aliso Canyon deployments, there aren’t that many 10+ megawatt-hour projects in the 2017 pipeline, indicating that the first quarter may be the largest quarter this year.”

The “Aliso Canyon deployments” that Manghani is referring to include Tesla’s biggest Powerpack project yet, a 80 MWh Powerpack station with Southern California Edison – pictured above. Though that project wasn’t deployed, or at least not entirely, during the first quarter, though it looks like GTM is counting it. Tesla reported the deployment earlier and only had a total deployment of 60 MWh in Q1.

Most of Tesla’s contribution to the record quarter for energy deployment was the 52 kWh Kauai project in Hawaii – giving the company a ~22% market share. 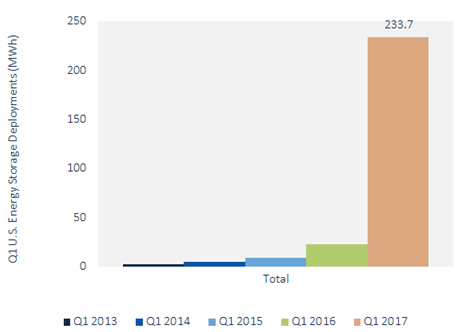 Here are the key findings from the report:

The research group explained that 91 percent of all deployments can be attributed to front-of-meter energy storage. Therefore, there’s room to grow the behind-the-meter market and Tesla could help there during the second half of the year.

The ramp up of the Powerwall 2 rollout has been slower than anticipated, but Tesla CEO Elon Musk said that he expects this to be corrected in Q3 and Q4:

“I would expect quite a dramatic ramp in storage deployment, like really dramatic.”

What we are seeing for the first quarter could be only the beginning of something even more impressive during the second half of the year if the growth of behind-the-meter storage could catch up with the growth of front-of-meter energy storage. While front-of-meter’s total capacity will undoubtedly remain larger, Tesla’s Powerwalls at 14 kWh each, and its competitors, can also add up if they are mass-produced.