We spoke too soon last month when we reported that “the controversy around Tesla’s undisclosed performance restrictions is finally truly coming to an end” as the automaker was deploying a new update to seemingly remove those restrictions.

As it turns out, the update was interpreted poorly by most people, myself included. Since the latest update, every owner of a Tesla performance car (Model S/X P85D, P90D, P100D) can access the full power of their vehicle, but they have to use ‘Launch Mode’. It’s now the only way to reach max power.

The first problem arose when some owners complained that they were losing power when pushing their vehicles on ‘Ludicrous mode’ and/or frequently using ‘Launch Mode’, which is an electronic aid to assist drivers in accelerating from a standstill.

We later learned that the reason was that Tesla was limiting the power output after frequent use of those features.

The vehicles affected ended up permanently limited until Tesla removed those limitations in an update last month. They wrote in the release notes:

That’s when they introduced the “I want my mommy” warning:

What was overlooked or misinterpreted at the time is a comment from Tesla President revealed an important detail:

“The software update that removes software performance reductions tied to frequent max battery power usage is being deployed now. With this update, maximum power output will be achievable anytime both Launch Mode and Max Battery Power Mode are engaged.”

The important word being “both”. Owners we talked to thought that they would have now been able to reach max power whenever they wanted if they floored the accelerator and ‘Max Battery Power Mode’ was on, but it’s not the case.

The only time that they can reach the full potential power output of the vehicle is when doing a launch with ‘Launch Mode’.

With this approach, Tesla is trying to find a balance between allowing owners to use their car to their full potential and prevent abuse that could result in premature wear of the powertrain.

“The solution introduced with the latest firmware update, which enables maximum power output anytime both Launch Mode and Max Battery Power Mode are engaged, is the best way to provide our customers with peak performance on-demand while at the same time protecting the powertrain from wear. We are also continuing to proactively monitor the condition of the powertrain to let our customers know if service becomes necessary.”

In other words, it limits when they can reach full power, but it doesn’t disable full power altogether as the previous software restrictions did.

A Model S P90D owner sent us the results of launches without ‘Launch Mode’ before and after the update: 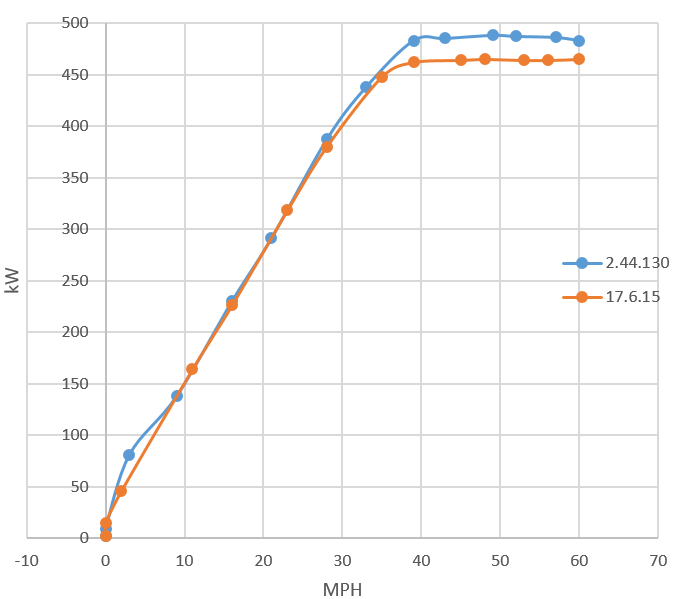 As you can see, it tracks closely all the way to 40 mph/450 kW, but it quickly reaches different plateaus after that.

Tesla said that third-party ways to measure power output are not necessarily accurate:

“While measuring devices and instruments may detect slight differences in power while using launch mode versus otherwise, these differences will be virtually imperceptible to our customers. Nothing about the latest firmware update changes our ability to meet our performance specs. Third party apps cannot accurately measure motor power, which is the metric most similar to the automotive industry standard for vehicle power.”

What do you think? Is it a good compromise or you would prefer Tesla to enable max power at all time? Let us know in the comment section below.