We previously reported that Tesla Powerwall installation had picked up in Australia in recent months and when massive blackouts started to plague South Australia last month, those homeowners were able to keep their lights on. Some of their stories were popular in the country. We shared one about a 73-year-old Tesla Powerwall owner powering through South Australia’s state-wide blackout without even knowing.

In the piece, we suggested that it could lead to more people looking into home battery pack solutions and sure enough, Tesla Energy authorized distributors in Australia are now reporting a ’30 times’ increase in demand for the Tesla Powerwall and other home battery packs.

Natural Solar is one of the most important Tesla Energy authorized distributors in Australia. It’s the company that installed the impressive 6-unit system seen in the picture above. Chris Williams, Natural Solar managing director, told AFR (paywall) that demand for the product has spiked:

Chris Williams, who runs a national firm with its headquarters in Sydney, said the biggest jump had been in South Australia and Victoria, but demand had spiked across the country after the blackouts put the future of electricity grids and renewable energy sharply into the national spotlight.

“We have seen a massive pick-up in demand. It’s been 30 times the normal levels. The interest in back-up power is enormous.”

Williams says that the biggest spike happened within the first 5 days after the blackout during the last week of September and that now about 95% of the company’s customers who are getting a solar array for their home also want to add a Tesla Powerwall home storage battery to go with the system.

While most people want a Powerwall in order to get more out of their solar panels by using the energy produced by the panels even after the sun goes down, like Clayton Lyndon from Queensland and his 6-unit installation, which allows him to use his solar power 99% of the time, now more people are looking at the Powerwall for “blackout proofing” their home.

They want to keep the lights on in case of an outage. Natural Solar gave an example of the energy consumption graph of one of its clients during the blackout in South Australia: 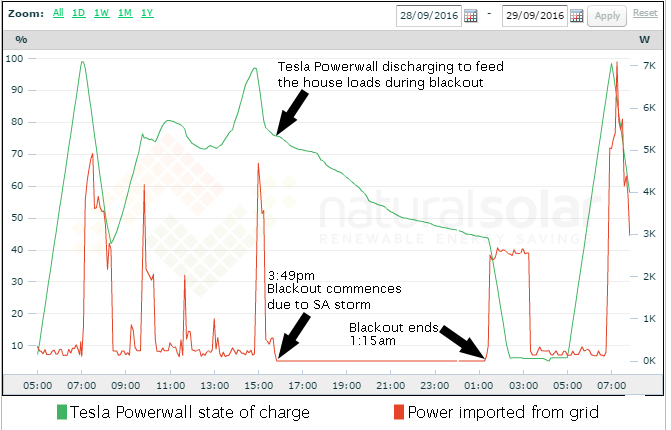 “Blackout proofing has become a really big point. People are sick of the grid in general and the high electricity prices,”

The blackouts and this significant increase in demand are coming just in time for Tesla to ramp up its energy storage division. Tesla CEO Elon Musk said that volume production would happen toward the end of 2016 after Tesla unveils the Powerwall 2.0 and other new energy products at an event on October 28.