China has developed a new charging standard in order to more efficiently deploy a charging infrastructure capable of supporting the up to 5 million electric vehicles it hopes to get on the roads by 2020. Tesla is now fully on board and announced today the launch of the ‘Tesla Charging Partner Program’ in China to promote the national EV charging standard.

Tesla shared a few pictures of the event on its Chinese blog:

The program helps partners get certified for the new standard with interconnection tests conducted at the CQC. Tesla writes:

“Tesla charging Partnership Program” encourages partners to get the voluntary certification by CQC, Tesla will preferably go through CQC certified enterprises and products, and further testing center in China to accelerate the newly established interconnection standard.

The program behind the new Chinese charging standard, which supports both DC fast-charging and level 2 charging, is by far the most ambitious EV infrastructure program currently in development. It is expected to create roughly 12,000 public charging stations and deploy 4.5 million chargers across China, which could require an investment of up to $20 billion USD. 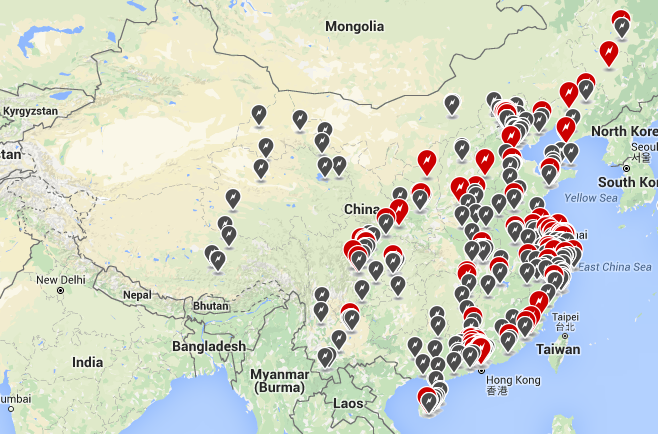 Tesla already operates a great number of charging stations across mainland China, though not necessarily based on the new standard. The company is expected to adapt these stations for interconnection compatibility between standards and to develop more charging points – Above you can see Tesla’s current charging stations in China with the Superchargers in red and Destination Chargers in grey.