Amnesty International and Afrewatch published a new investigative report (embedded below) explaining in details the global supply chain of cobalt and the use of child labor to source the mineral in Congo.

The report highlights the failure of certain electronics and electric car companies to ensure that the cobalt used in their batteries is not sourced using child labor. It names several automakers like Mercedes, VW and BYD, as well as several battery manufacturers known to supply automakers, like LG Chem (GM and Nissan). The report also goes after electronic giants Apple, Samsung and others.

More than half of the world’s total supply of cobalt comes from the Democratic Republic of the Congo (DRC), where according to the government’s own estimates, 20% of the resource is extracted by what they call “artisanal miners” (approximately 110,000 to 150,000 workers).

Amnesty says that these “artisanal miner” mine by hand using the most basic tools to dig out rocks from tunnels deep underground and can include children as young as seven years old.

The organisation visited five mine sites in southern DRC in April and May 2015, where they interviewed nearly 90 people who work, or who have worked, in the mines, including 17 children. In its report, Amnesty International describes human rights abuses in these “artisanal mines” due to very poor work conditions and chronic exposure to dust containing cobalt, which can result in a potentially fatal lung disease.

Most children interviewed by Amnesty indicated that they earned between 1,000-2,000 Congolese Francs per day (US$1-2).

The report makes several recommendations to the DRC in order to stop the practice, but also to the governments of countries where are headquartered the companies ultimately using the resource for their products.

The group included a detailed supply chain of the cobalt sourced from the DRC and the mining group using these “artisanal mines”: 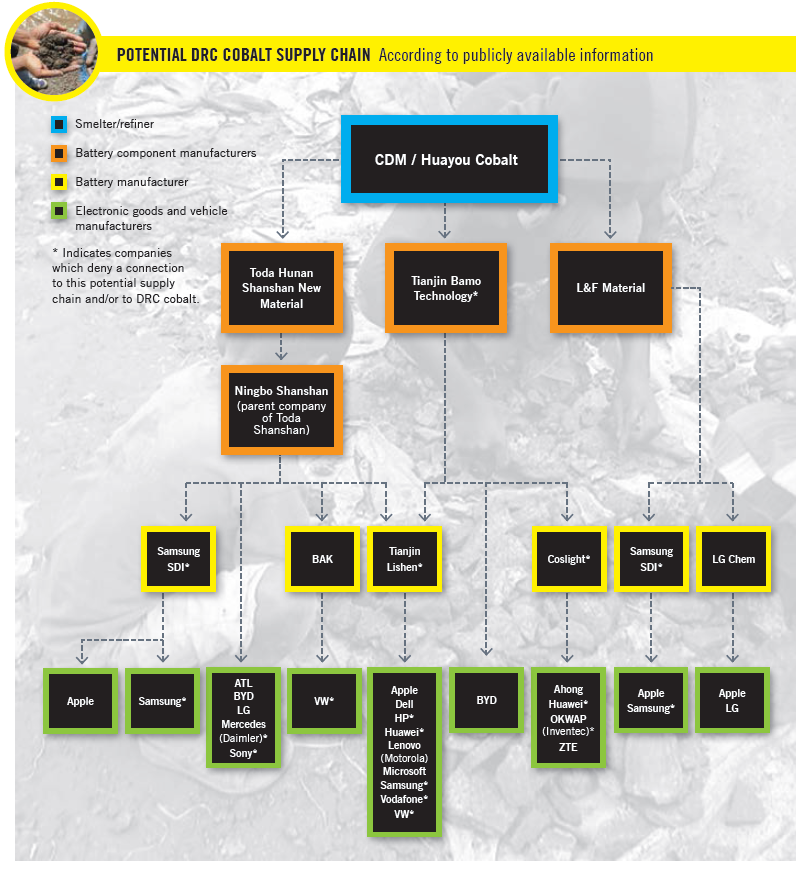 In its report, Amnesty is critical of several companies for not making enough due diligence to ensure that cobalt sourced by child labor doesn’t end up in their products. The organisation traced the supply chain back to LG Chem, which supplies automakers such as GM and Nissan.

Even tough Tesla Motors’ battery cells are made using cobalt for the cathode, the company is not named in the report because its main battery cell supplier, Panasonic, sources its cobalt from the Philippines and not Congo. Although, Tesla recently signed a battery supply agreement with LG Chem, which is named in the report.

Several of the companies commented on the report, but they mostly highlighted that the source of the cobalt is difficult to established due to the complexity of the supply chain. Samsung SDI wrote:

“The company investigated the country of origin of cobalt which is not on the current list of conflict minerals. However, in reality, it is very hard to trace the source of the mineral due to suppliers’ nondisclosure of information and the complexity of supply chains.”

LG Chem was able to trace its cobalt back to one of the main mining companies (CDM) involved in Amnesty’s investigation and commented:

“We are discussing whether there is a need for us to conduct our own inspection on the cobalt mining areas in Katanga, together with a 3rd party inspector. If the risk of human rights violations is confirmed to be very high and serious through the inspection, we will consider taking a wide range of effective actions to stop the violations, such as suspending or terminating business with those suppliers who procure cobalt from such mines.”

Hopefully, the new report can help bring some needed change in the industry. I’ll end with a quote from Business & Human Rights Researcher at Amnesty International Mark Dummett:

“The glamourous shop displays and marketing of state of the art technologies are a stark contrast to the children carrying bags of rocks, and miners in narrow manmade tunnels risking permanent lung damage,”