It looks like a Nissan dealership either jumped the gun or is making claims it probably shouldn’t on the upcoming 2016 Nissan Leaf.  Andy Mohr Nissan (via InsideEVs/Green Car reports) publishes the following info on the 2016 Nissan Leaf:

While there are many features that make the Leaf a popular vehicle, there is one thing it’s known for above all else: its battery. The 2016 Nissan Leaf redesign will bring a first to the electric car: your choice of two different batteries.

The majority of electric cars only feature one battery option, and by providing drivers with their choice of a lower capacity battery if they don’t intend to drive long distances, the new Leaf can find a home in even more garages. 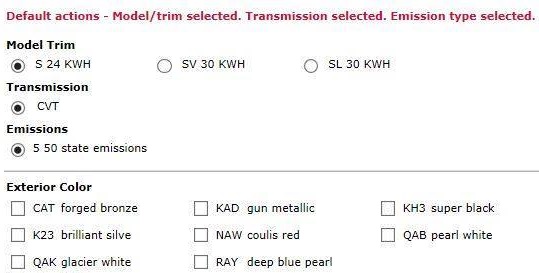 If we take Andy Mohr Nissan at their word, the increased battery will clock in at 30kWh and offer an EPA estimates 110 miles of range. That’s certainly a big step up but not anywhere close to what the much more expensive Tesla offers.

The lowest model S ever offered, the discontinued S 60 had double the new Leaf’s battery though that battery pushes the smaller Leaf a little farther on a miles/Watt basis.

The 2016 Chevy Volt is also stepping up to a bigger battery that will top out at 53 EPA rated miles but it also has a ICE that kicks in after you run out of electrons.