Elon Musk talks Model 3 cost ($35,000), launch window of 2017, and potential to work with franchise dealers in the future 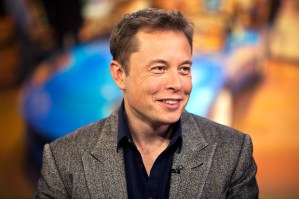 In a corporate world often teeming with bland political correctness, Elon Musk, whether you love him or hate him, is a breath of fresh air. Not afraid to call it like he sees it, whenever Musk delivers a talk or sits down for an interview — or even a Reddit AMA — it’s always a good idea to listen closely.

Most recently, Musk on Tuesday spoke at the Automotive News World Congress event in Detroit where the Tesla CEO touched on a wide array of topics.

Of particular interest were Musk’s comments on the highly anticipated Model 3. Though a few years away, the Model 3 remains Tesla’s big bet to bring electric cars into the mainstream. Moreover, the potential success of the Model 3 is the big bet that multitudes of investors are banking on.

According to Musk, the Model 3 remains on track for a 2017 release and the company remains optimistic that it will be able to sell approximately 500,000 vehicles (of all models) per year by 2020. Looking even beyond that, Musk relayed that the company has plans to up production to “at least a few million a year” by 2025.

That would make the company about the size of BMW today.

That’s an ambitious goal, to be sure, but Musk didn’t get to where he is today by thinking small.

Of course, a key, if not the most important, variable in the Model 3 equation will be cost. If Tesla really wants the Model 3 to be a mainstream hit, it will have to be priced much lower than the premium, yet still wildly successful, Model S.

On that note, Musk earlier today said that the Model 3 will be priced at around $35,000 without any tax credits. If Tesla is, in fact, able to reach that pricepoint thanks to economies of scale via the in-progress Gigafactory, the Model 3 would be well positioned to have a discernible and sweeping impact on the auto industry. What’s more, by the time 2017 rolls around, Tesla’s network of superchargers will be even more ubiquitous and the positive word-of-mouth praise surrounding the Tesla brand will be even stronger. Note that the average price of a new car in 2013 checked in at about $32,000, thus making the Model 3 an attainable purchase for many.

While we still don’t have a clue as to what the Model 3 will look like, Musk noted in a recent Reddit AMA that it “won’t look like other cars.” Meanwhile, Tesla lead designer Franz von Holzhausen has said that it’s the coolest thing he’s ever worked on. Intriguing, to say the least.

Musk also added that the Model 3 “will be way different from any other car on the road”, albeit in a way “that’s really useful and just doesn’t feel like a weird-mobile.”

On a related note, Musk also touched on the potential for Tesla to work with franchise dealers, something the company has avoided like the plague for years. Arguably, for Tesla to truly have a mainstream hit with the Model 3, it will need to rely on franchises due to logistics alone.

… Musk said he was open to partnerships with retailers to sell Tesla vehicles, but not until after the company no longer has production bottlenecks.

“Before considering taking on franchised dealers, we also have to establish (more of) our own stores,” he said. Musk said “we will consider” franchising “if we find the right partner.” He did not elaborate, but said Tesla “is not actively seeking any partnerships” with other manufacturers “because our focus is so heavily on improving our production” in Fremont.

With the Model 3 hopefully just two years away, the next big item on Tesla’s radar is the impending launch of the Model X. Though already delayed, Musk reiterated that the vehicle is on target for a Summer 2015 launch.