Yesterday, we reported on a strange article in which Fortune Magazine tried to make the case that Tesla should have disclosed the fatal Model S accident on Autopilot before raising capital through a secondary offering a few weeks after the fact. The publication claims that the accident was material to Tesla’s stock and therefore, it should have been announced when the company learned of the event and not when NHTSA decided it would launch a preliminary evaluation on June 30.

Elon Musk argued against it being material to Tesla’s valuation in an email to Fortune, but now the publication is somehow trying to use a boilerplate statement from Tesla to prove that Musk and the company previously considered the accident a material event, which is not necessarily the case. END_OF_DOCUMENT_TOKEN_TO_BE_REPLACED

Elon Musk says that about ‘500,000 people would have been saved (last year) if Tesla’s Autopilot was universally available’

Following the news of the fatal accident in a Tesla Model S on Autopilot, which happened in May but only came to light last week, Tesla CEO Elon Musk claims that about half of the approximately one million people who died in auto accidents last year would have been saved if the Tesla Autopilot was universally available.

He made the comment in a somewhat strange email conversation with a retired journalist. END_OF_DOCUMENT_TOKEN_TO_BE_REPLACED 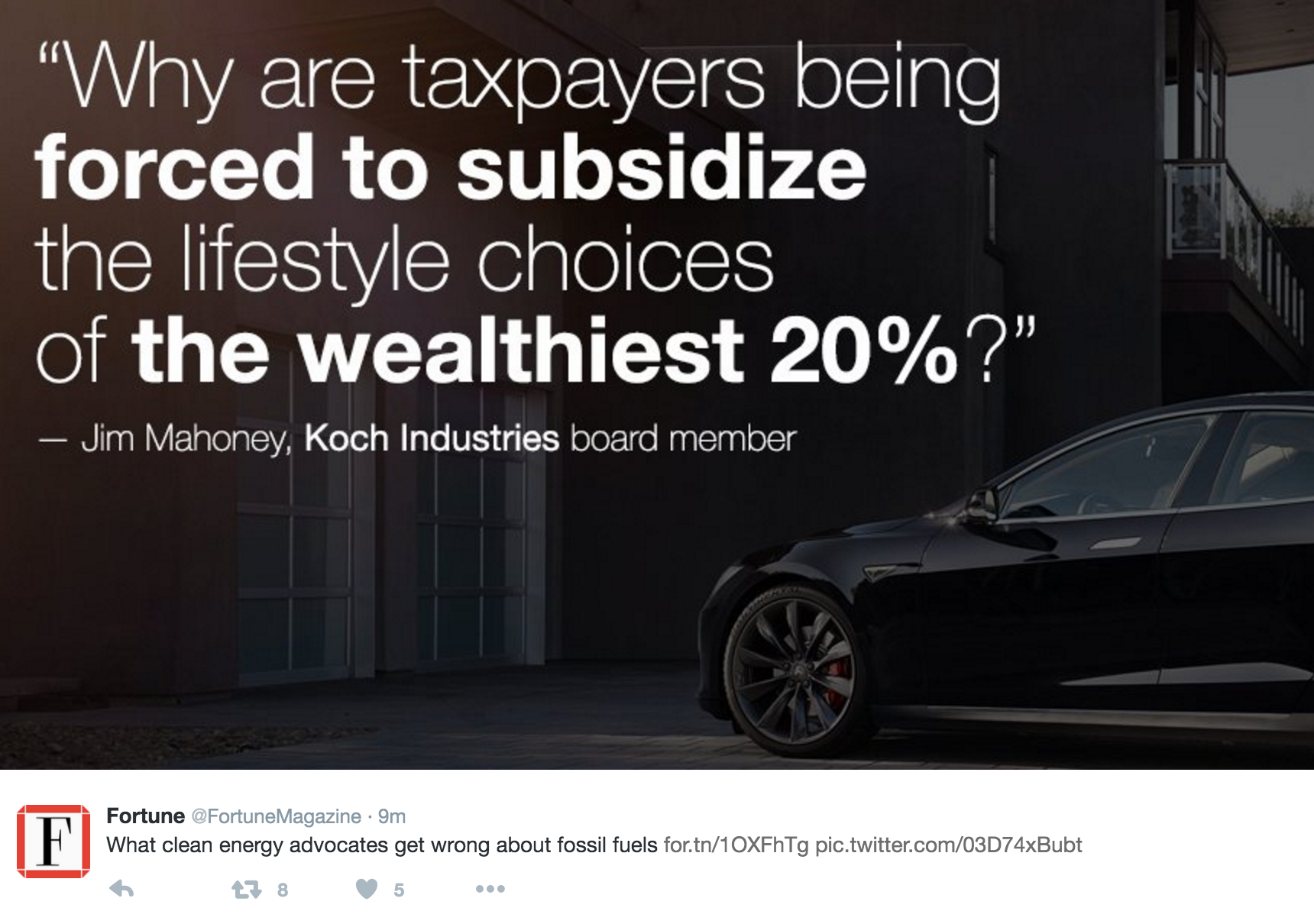 Fortune is running a Koch Industry advertisement-as-commentary piece today ‘authored’ by Jim Mahoney, the employee signaled out in a Huffington Post article last month as leading a $10M campaign against EVs.

The piece doesn’t directly reference Tesla by name, but it does feature pictures of the Model S both in Fortune’s article and subsequent social media push by the publication (see above).

We advised that these hit pieces were coming but didn’t know they’d be coming so soon.

It looks like electric vehicles are still in the “fighting phase” as we learn today that billionaire brothers Charles and David Koch are planning to back a new group of lobbyists with a focus on “boosting petroleum-based transportation fuels and attacking government subsidies for electric vehicles”, according to refining industry sources talking to the Huffington Post….

Mahoney is a petroleum industry veteran who uses a few tired gems like: END_OF_DOCUMENT_TOKEN_TO_BE_REPLACED