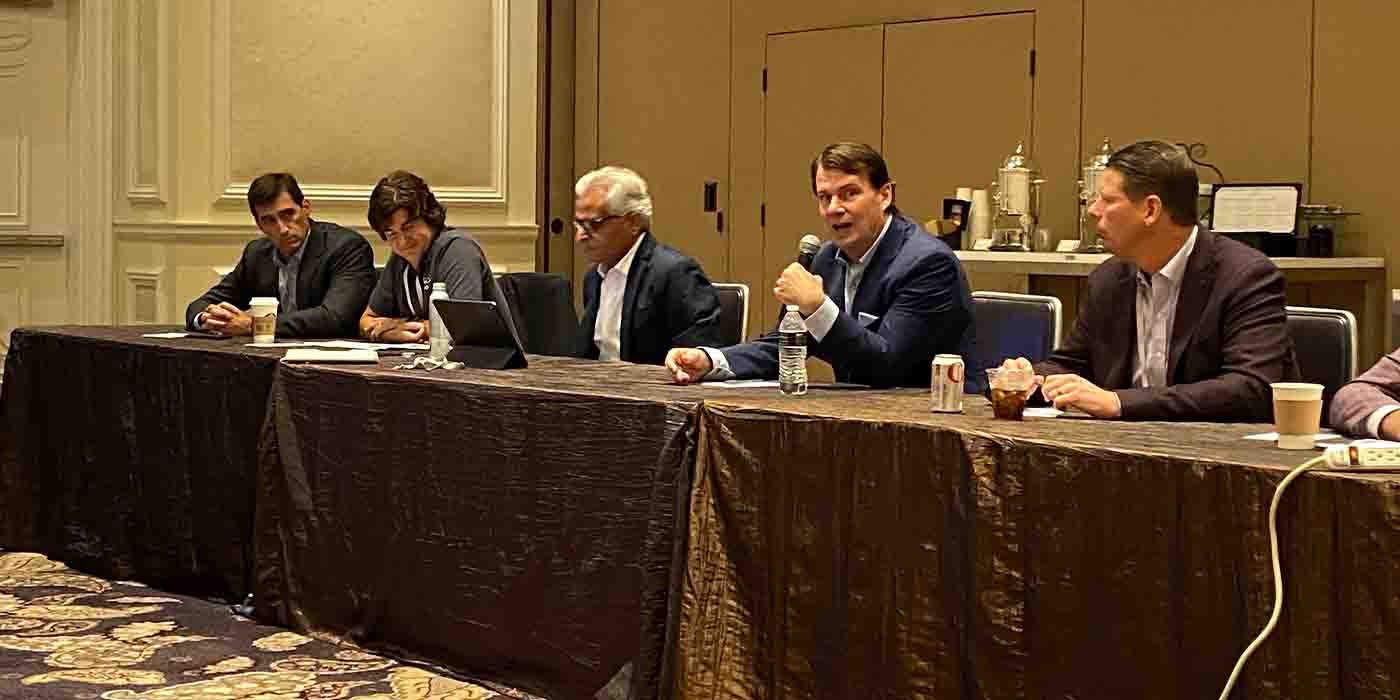 Ford Motor Company has unveiled a new companywide strategy to its dealership network of nearly 3,000 locations. Ford dealers have been alerted that they have until October 31 to decide whether they will invest their own money into one of two “certified” EV tiers to partake in Ford’s Model e business. Only those dealers who buy in will be authorized to sell EVs from January 1, 2024, onward. There’s a lot to unfold here, so let’s get right to it.

Ford is one of a select few automakers we cover on this site that really doesn’t require an introductory course to its progress of electrification. The American automaker has truly embraced EVs in recent years and currently sits as No. 2 in US sales behind Tesla.

Despite only two passenger EVs on the market and one commercial EV through its Ford Pro business, the automaker has been teeing itself up nicely to lean into the electric revolution. As Ford CEO Jim Farley put it during our conversations with him yesterday, “We are only in the first or second inning right now.”

Ford has plenty more at-bats to please hungry consumers, and can already tally a grand slam on the scoresheet with the early success of its Ford F-150 Lightning. This week, Ford invited a very exclusive group of the media to its annual meeting with its dealership network, inviting franchisees from all over the US to come to Las Vegas and experience the automaker’s latest technologies and learn about what they can expect to see next.

As a media outlet focused specifically if religiously on electrification, we were elated to be invited, especially since Ford decided to introduce some major changes coming to its dealer network… should they choose to come along for the ride. No pressure though!

Yes, you read that right, but before you say anything on Twitter, keep reading, because this strategy makes a lot of sense at its core. As you may recall, Ford split its passenger vehicle business in two this past March, creating separate entities under the blue oval brand:

News of the Ford Pro strategy was shared with dealers at the automaker’s annual dealer meeting last year and since then, many of those businesses have been selling and servicing vehicles from all three divisions. Now however, Ford hitting its network of dealers with another potentially game changing curveball – hop on the magic carpet ride (with your own money) and sell Model e vehicles, or just stick to combustion and circle back in a few years.

Still following? Let’s clarify, because the Ford team will be the first to admit that this transition is ever-evolving and will take massive funds, strategy, and time. That said, dealers need to decide quickly if they’re in or out… at least for this first wave. Here are some key ideas to note.

With these new dealer commitments, Ford is laying the foundation for a bright future in EV sales, not only in retail, but online as well. In a sit down with a small group of media yesterday, Ford executives from all three divisions, as well as CEO Jim Farley, presented the future of Model e dealerships, built upon five pillars. He explained:

We’re betting on the dealers, we’re not going to go direct. But we need to specialize. We do that with unique standards.

Ford has essentially given its dealers a kind, but firm ultimatum – sell EVs under these new standards or don’t, they will support them either way.

For dealers interested in sticking with Model e and selling Ford branded EVs, they must be certified under one of two categories, which will require a hefty dealer investment no matter what. Here’s how the certifications break down:

For a smaller investment, current Ford dealers can continue to sell EVs and all that comes with them including repair, maintenance, and charging, plus physical and digital experiences. However, those dealerships will only be given a limited number of retail orders over the course of a year, mainly for its most loyal local customers.

To become Model e Certified, Ford requires an “estimated” investment of $500,000. Ford has stated that this number is a conservative estimate of what it will cost to put the necessary infrastructure in place to support all the requirements needed for the nascent EV market. 90% of this estimated cost pertains to charging infrastructure, of which prices greatly vary based on a number of factors including location, grid capabilities, labor, permitting, construction, etc.

Another noteworthy requirement for this certification is that the Ford dealership must install at least one public facing Ford DC fast charger that must provide at least 120 kW of power. Hence the reason for the high investment.

Like Certified dealers, Elite members are permitted to sell Ford’s entire lineup of EVs and all the services that come with them, but are not limited in retail or otherwise (online). For this higher tier, Ford is telling dealers to prepare to invest an estimated $900,000, because they are required to install two DC fast chargers, at least one public facing.

Furthermore, Ford Model e chief customer officer Marin Gjaja told us that Ford estimates these dealers will probably end up playing closer to $1.2 million (estimated), because they are probably going to want a third charger by 2026 when the second of two investment payments is due.

As a Certified Elite Ford EV dealer, these businesses will receive an “x amount per year” in EV volume rather than a percentage. Ford feels this is more fair since the investment itself is a fixed amount.

The first wave of Model e dealer exclusivity will begin on January 1, 2024 and run until December 31, 2026. Additionally, these Ford dealers must decide by October 31, 2022 if they are in or not, and whether they want to be Model e Certified or Elite.

If a dealer decides that EVs are not big enough in their local area yet and wants to hold out, that is completely fine. There will be a second wave of Model e certification for dealers beginning in 2027. Those dealers will need to commit to that next wave by 2025, however.

The reasons for these early commitments is the anticipated timelines expected to get the required charging infrastructure in place – a puzzle of permitting, red tape, and lack of equipment that has been mucking up the entire EV industry looking to bolster grids and expand charger availabilites.

To aide in this process, Ford has enlisted several partners who will not only educate dealers on the process of installing necessary charging, but help figure out all the logistics, paperwork, and implementation. This includes ABM in and East and West, AGI in the Central and Southeast United States, and EnTech Solutions in the Great Lakes region.

Let’s hope they can make it happen, because Ford’s current stance is that a dealer will not receive any EV sales until it meets all the requirements outlined above. Again, this could change by 2024, but right now that’s gospel.

Ford sees fast charging as absolute must to compete with Tesla

Ford CEO Jim Farley spoke in length about about the need for more fast chargers to not only support dealers in their service, sales, and demonstrations, but to also provide nearby charging to customers as well. Tesla was also the only automotive competitor mentioned at all during the entire day, but its name came up several times. Here’s one example from Farley:

We’re now number two in the US in EVs and we are now realizing how important the charging experience is and what an important advantage Tesla has. So this is a really important lesson for us and it became really clear to us during covid.

Farley admitted that is watching Norway in particular very closely, checking reports every month to monitor the changes overseas, especially in terms of what Tesla is doing. Especially since that’s a country where Tesla has an interestingly large footprint of operations.

The Ford team has learned that Tesla has nearly 1,200 employees in Norway across 21 physical locations for a population of only 5.4 million people. By Ford’s math, if Tesla were to scale that to comparable US population, Tesla would have a physical distribution network equivalent to 1,200 dealers.

To that note, Ford feels that Tesla may someday have to expand its physical presence in the US as it scales its units of operation, but the team admits it genuinely doesn’t know what its competitor is planning. We asked Ford’s CEO to clarify and he said the following:

We don’t know what they’re (Tesla) going to do, but we think that Norway – coal market, a lot of rural customers – is a really interesting place to study their evolution of their go to market strategy. What we see are physical sites for questions around the software, complicated financing, trade-in, and used car operations, and people that are just there to sell the car that actually explain the third and fourth generation of software, how to use it. That’s why they’re creating these physical places. But I think it’s really important for us, in our thinking of these standards to watch how a 70% electrification market for a ten year period has evolved the go to market. Because again, we’re planning on selling millions of these, and we have to prepare for the scaled experience to do that.

Marin Gjaja chimed in about this waltz between digital and physical sales, citing past commerce battles between Amazon and big box stores like Target and Walmart. Those competitors each evolved its very distant business strategies in favor of a middle ground where both options are available and optimized.

Ford looks to bring a similar approach to the EV buying process by offering online and retail sales, and already has the dealership network in place to give it a head start on Tesla.

There’s truly so much more to unfold here as Ford has decided upon yet another monumental shift on how it sells vehicles, furthering its depth into the endless ocean of EV possibilities. Check back with Electrek as we follow Ford, Tesla, and everyone else nipping at their coattails.