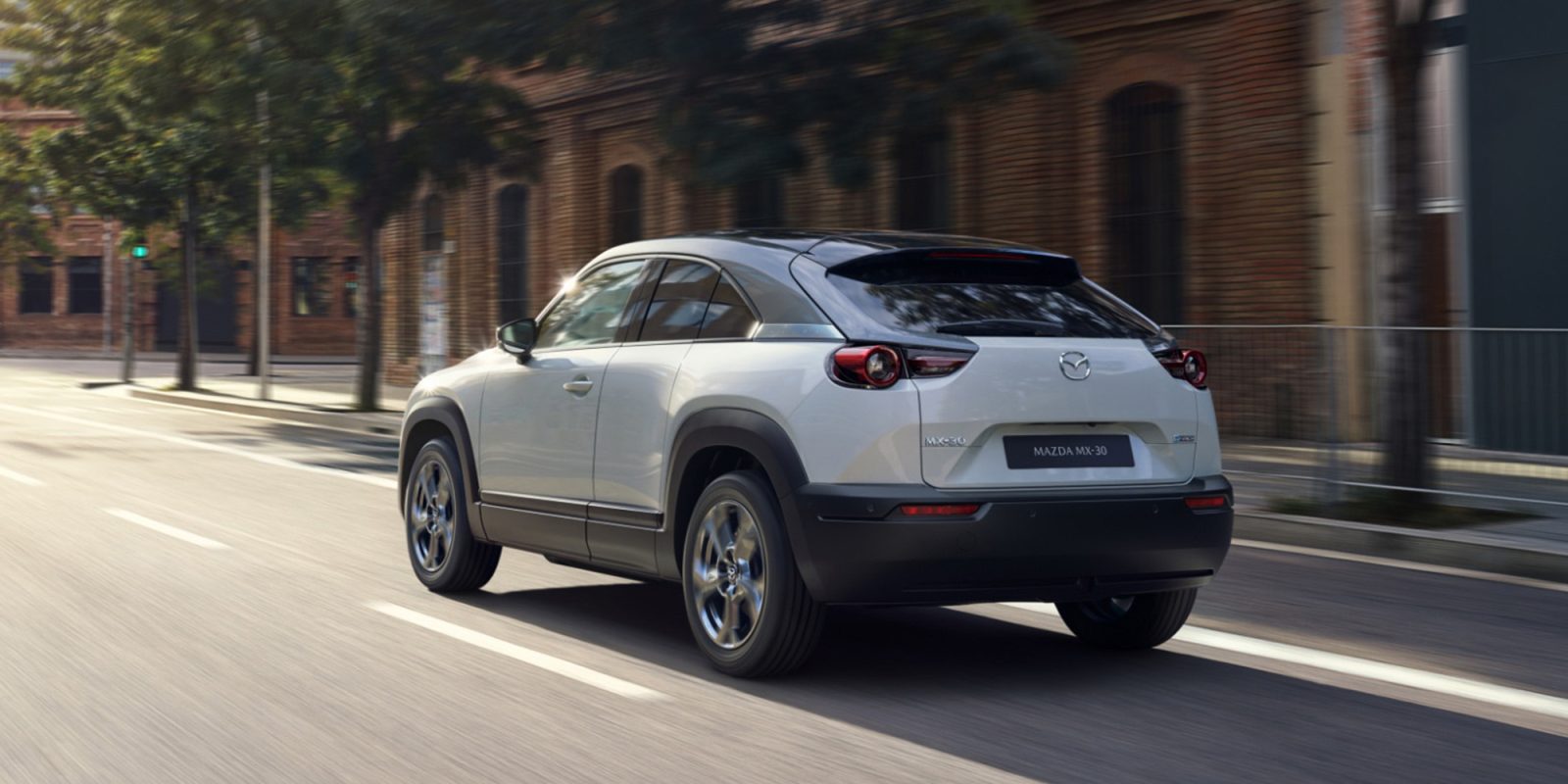 After selling only 8 units last month and 505 in total, the 2022 Mazda MX-30 is now officially sold out in the US. But will it even come back next year, or is that the last we’ll see of this EV? And if it is the end of the BEV model – will an upcoming PHEV model fare better?

Mazda had modest goals for the MX-30 from the beginning. When we drove it last year, Mazda told us its goal was to sell just 560 units in the US in the first model year, all in California – a state which requires manufacturers to sell a certain amount of zero-emission vehicles or face fines. In the end, it fell about 10% short of that goal due to production shortages.

At the time, it seemed the plan was to start EV sales in California and then expand elsewhere. Mazda said it planned to offer EV, PHEV, and hybrid models depending on local conditions, such as charger availability and driving distances. Mazda also suggested it could modify battery sizes for various regions.

Europe and California both exceeded Mazda’s claimed “local condition” thresholds, so these two territories got the fully-electric MX-30. We assumed it would expand to other areas, or continue in those areas, given that charging conditions are only getting better, not worse.

However, currently, Mazda is telling customers that the MX-30 is sold out and has no timeline for when new models might come back in stock.

Not with a bang, but with a whimper

In fact, we heard the news of the model being officially sold out over a week ago, and yet we’ve barely seen any mention of this pretty much anywhere. The dismal July sales numbers were widely noted, but nobody really reported on the model being officially sold out. This car model has been treated with such insignificance that even its passing hasn’t been noted. We asked in our original review “The 2022 Mazda MX-30 misses the market, but does it matter?” and the answer seems, again, to be no.

Since we first heard the model was officially sold out, we’ve been trying to get comment from Mazda about it. Mazda confirmed with us that a total of 505 MX-30s were sold and that the model is now completely sold out. It declined to comment on whether 2023 cars are coming to dealerships or if the MX-30 is sold out in other territories too.

We were able to find some MX-30s for sale in Europe, but we don’t know if more stock is coming or if the European market has also reached the end of the line.

Given that MX-30 sales started last year in October, that means we’ve got one to two months before the 2023 cars would come to dealerships if they were in the plan, which suggests to us that they are not.

So it looks like the MX-30 BEV is sold out in the US, perhaps forever, after only being available in California for 10 months total and missing its modest sales target by 10%. Congratulations to the owners – you got an EV that’s even rarer than the original Tesla Roadster.

But what are Mazda’s plans going forward? Mazda does plan other EVs, as last year it told us it will announce three new EVs by 2025. We hope the MX-30, which has died a premature death, does not count as one of them.

Even though Mazda wouldn’t confirm this with us this week via email, we know it plans to build a plug-in hybrid. Mazda mentioned this to us before and made it quite obvious in the design of the EV that it was focusing more on the PHEV than the EV.

There’s a huge empty space under the hood that will eventually be filled with a rotary engine and even the “electric” badging on the car is only a sticker. On the window. Mazda clearly did not go out of its way to devote any more engineering resources than absolutely required to this EV.

So it looks likely that the EV model, only made for one year (or a couple, overseas) and sold in California to comply with zero-emission vehicle requirements, was just a temporary stopgap for the “real” car, the PHEV.

Will the Mazda MX-30 PHEV be better?

We were disappointed with the BEV model, but here’s the interesting thing: The PHEV, the car Mazda seems to have been working toward all along, might actually be pretty good.

While Mazda has not finalized details on the PHEV, we think it will come with the same or a very similar battery to the EV.

If it does, this means it will have a roughly similar range as the EV, minus a little bit due to added weight and complexity of the small rotary engine Mazda plans to use – so for range, a guess would probably be somewhere around 90 miles.

At that rate, it would put the MX-30 PHEV in the same category as the BMW i3, as a PHEV that really can be used as an EV in almost all situations. But instead of having a huge battery for rare longer-than-90-mile road trips, it will instead use gasoline. (Another great thing the i3 did was offer the engine as an option, showing people that PHEVs add complexity and cost, and make the car perform worse than if you just went all-electric.)

There are a lot of low-range PHEVs out there with small enough batteries that drivers often don’t bother to charge them, and they’ve only been included for compliance reasons or to get tax credits or other perks. If Mazda keeps a sizable battery in the MX-30 PHEV, it will be much more usable as a full EV in most situations than most PHEVs out there today.

A similar thing happened with the Honda Clarity, which was a multipowertrain car (BEV, PHEV, and FCEV). We declared the BEV version dead on arrival when details were announced because it simply wasn’t competitive with the rest of the market at the time. But the PHEV version was actually pretty reasonable spec-wise at the time, comparing favorably to the Chevy Volt, one of the few PHEVs at the time with a good enough balance of all-electric range so that drivers would actually bother to charge it.

The new EV tax credit in the Inflation Reduction Act does apply to PHEVs, so Mazda could theoretically still get access to it with a plug-in hybrid rather than a pure EV. But the tax credit doesn’t apply to vehicles produced outside of North America. Mazda currently builds the MX-30 in their Hiroshima plant, which means it won’t qualify. But one of its plants, in Salamanca, Mexico, does assemble the CX-30, the gas relative to the MX-30.

But another big issue with this plan is that PHEVs just aren’t all that popular. Sales of all green vehicles are spiking right now, but EVs have had continual growth since their introduction, whereas PHEVs have lagged behind EVs for the last decade and hybrids had basically reached a plateau up until last year.

It’s possible that PHEVs will become more popular with the new tax credits, but it feels like consumers largely prefer all-electric to plug-in hybrids. Once you get a taste of driving on electric, it’s not pleasant to feel that engine fire up again.

But maybe that’s just because we don’t have a lot of good, long-EV-range PHEVs. The last one, the i3, had a distinctive look to it which some people loved and some did not. And the Volt was a solid, usable car, but GM decided to go a different direction, as did Honda with the Clarity. All three of these cars are no longer in production.

The Ford Escape and Toyota RAV4 PHEVs both have around 40 miles of range, which is about the floor to make a car usable on all-electric for average daily driving tasks. But the Mazda could have twice the all-electric range of those cars, and the RAV 4 Prime has a base price of $40k – significantly more than the MX-30 EV’s $33k base (which will undoubtedly be higher when an engine is added, but hopefully not $7k higher).

So there is a niche available for a PHEV with a long-range and a good price. Mazda might fill that niche with the MX-30 PHEV, and it might actually offer a good value proposition for those buyers who are still looking for a PHEV in this day and age.

It’s still disappointing for us to see Mazda seemingly abandon its BEV model, but if it manages to execute well on its plug-in hybrid, it could actually be a good addition to the electrified landscape.

(Also, as we must add to every Mazda article: Please electrify the Miata already. Please!)