2023 Chevy Bolt EV is still the best value EV in America, by far 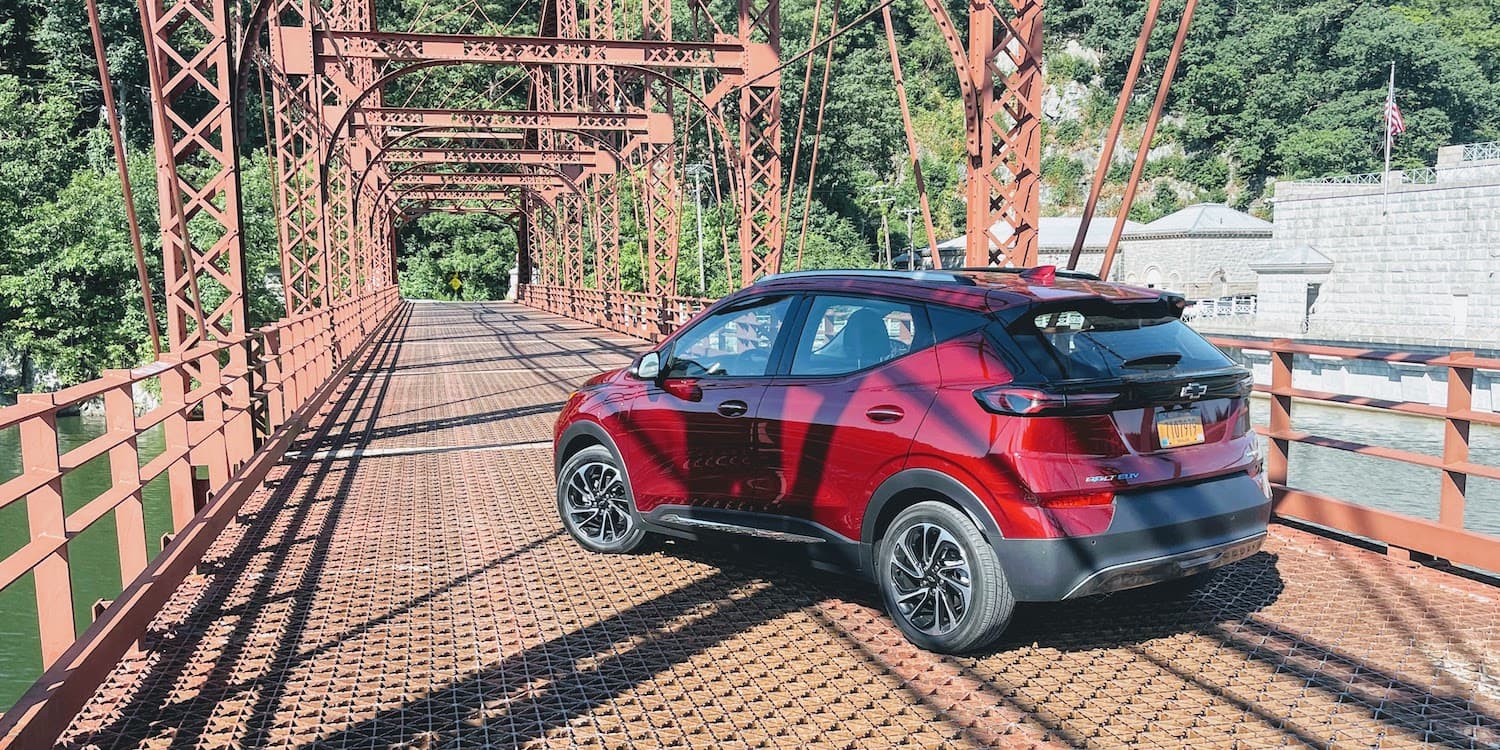 Long time Electrek readers will know that I leased a Chevy Bolt EV from 2017 until the pandemic and really loved that electric blue “Micro-SUV” EV; we’ve already taken a look at its younger sibling, the EUV with Super Cruise. But considering recent events GM has cleaned up the battery “issue” and lowered the price by $6000, and introduced 2023 model year – as well as a tax rebate refresh opportunity – I thought it would be fun to take another look at the now sub-$30,000 Bolt EUV.

Back to the Bolt

I’ve been driving one version or another of this car since way back at CES in January of 2016.. At that time it was a prototype, and we were among the first to actually get to drive it. We weren’t allowed on streets, just a big parking lot, but it was immediately obvious that there had been some great engineering and packaging work done here.

Just for nostalgia, this was the 2015 Bolt prototype:

Chevy actually built the Bolt EV and delivered the first units at the end of 2016. I got mine on the east coast in early 2017 and fell in love with the very small form factor “Micro Crossover.”

I loved it so much, I even wrote some blasphemy like “10 things I like on my Chevy Bolt EV vs the Tesla Model S.” When my 3-year lease was up, I tried to buy out the Bolt, but GM somehow wanted to charge me more than a new one so I passed. I also didn’t want to go through Chevy dealer hell again to get a new one.

So I wrote a retrospective and moved on, but of course, GM wasn’t yet done with the Bolt.

Soon after GM wouldn’t sell me my Bolt, they began having Bolt battery fires and started buybacks and halted production. I dodged a bullet there.

The Bolt EUV was also unveiled in Feb 2021, and we took a first drive of it. The EUV is six inches longer providing more room inside, including three additional inches of legroom in the back seat. That extra length/reduced height also makes the Bolt EUV look more like a crossover SUV than the Bolt EV which more closely resembles a hatchback than a “Micro Crossover” . The drive train stays the same, so the bigger EUV is less than a second slower 0-60 and has a slightly reduced range.

Perhaps most importantly, GM saw fit to include an optional Super Cruise Autonomous driving on the EUV. It must be configured at purchase and cameras/equipment are built-in, however, so it can’t be added on later like Tesla’s Autopilot/FSD.

Otherwise, the EUV is outstanding for an inexpensive EV, which are few and far between these days. The 0-60 in six seconds isn’t lightning fast, but it is respectable. The seats of both Bolts improved dramatically in 2022, and I wasn’t among the people who hated the early Bolt seats – the whole interior is just a lot nicer.

Bolt EV and EUV – Fun to drive and practical

Maybe the most important aspect of the Bolt experience is the ease and how much downright fun it is to own. You can rip around turns, gun it on green lights and park with ease. The hatchback means it is easy to load and there’s a surprising amount of space in the back. Four adults fit well in either the EUV or EV as well as 3 kids in the back.

As a bonus, in the 3 years I had it, it didn’t need to be serviced even once. No oil changes obviously but also no brakes, tune ups, tires, etc.

Unfortunately, the EUV still suffers from many of the issues I had with the Bolt back in 2017. Notably:

One of the bigger improvements to the Bolt is the CarPlay/Android Auto experience. The 10.2-inch display is not only bigger, but it feels brighter and things like maps really pop. The touch display is also much more accurate.

The biggest change, however, is that Carplay/Android Auto now works wirelessly, meaning you can just leave your phone in your pocket or drop it down the cleverly designed wireless charging hole and see the charging status on the display. In my testing, Wireless CarPlay worked almost flawlessly on the Bolt EUV with a little bit of a lag time when switching songs.

The Bolt retains the ability to change songs and volume behind the steering wheel, though it has changed the buttons somewhat. Once you get used to this, the ergonomics of the Bolt are fantastic.

There are some notable differences in the two cars including the 6-inches of length and SuperCruise discussed already.

Storage space is remarkably similar given the extra six inches of length. But surprisingly, because it is higher, the shorter EV actually has more cargo space on a volumetric basis.

I can very highly recommend the Chevy Bolt to anyone shopping for an EV in the $30,000 or under price bracket. In fact, there’s not much else out there to consider in the US market. The Nissan Leaf is similar priced but lower range, Chadamo fast charging and slower. The $35,000 Kia Niro/Hyundai Konas aren’t as zippy (yes similar 0-60 times) and are more expensive (though they charge faster). The rest of your options are used Teslas (which don’t age particularly well) and other early EVs like Jaguar i-pace/Audi E-Trons or compliance cars. Even Mazda’s MX-30EV with all of 100 miles of range, is more expensive at $33,500.

The biggest question you might have is EV or EUV, and I might have a surprising answer for you. I recommend the EV over the EUV UNLESS you need that three inches of extra rear room or Super Cruise, which I love (but also goes on a $25/month subscription after three years). The Bolt EV is incredibly roomy for its footprint, and there is actually less cargo space in the EUV.

The EV is also $1600 less than the EUV base price. What’s more exciting is that depending on if the the new law making its way through the US congress passes, it might make the Bolt a sub $20,000 car. A lot of devil will be in the details there, and it is likely that GM will bring prices back up if it passes.