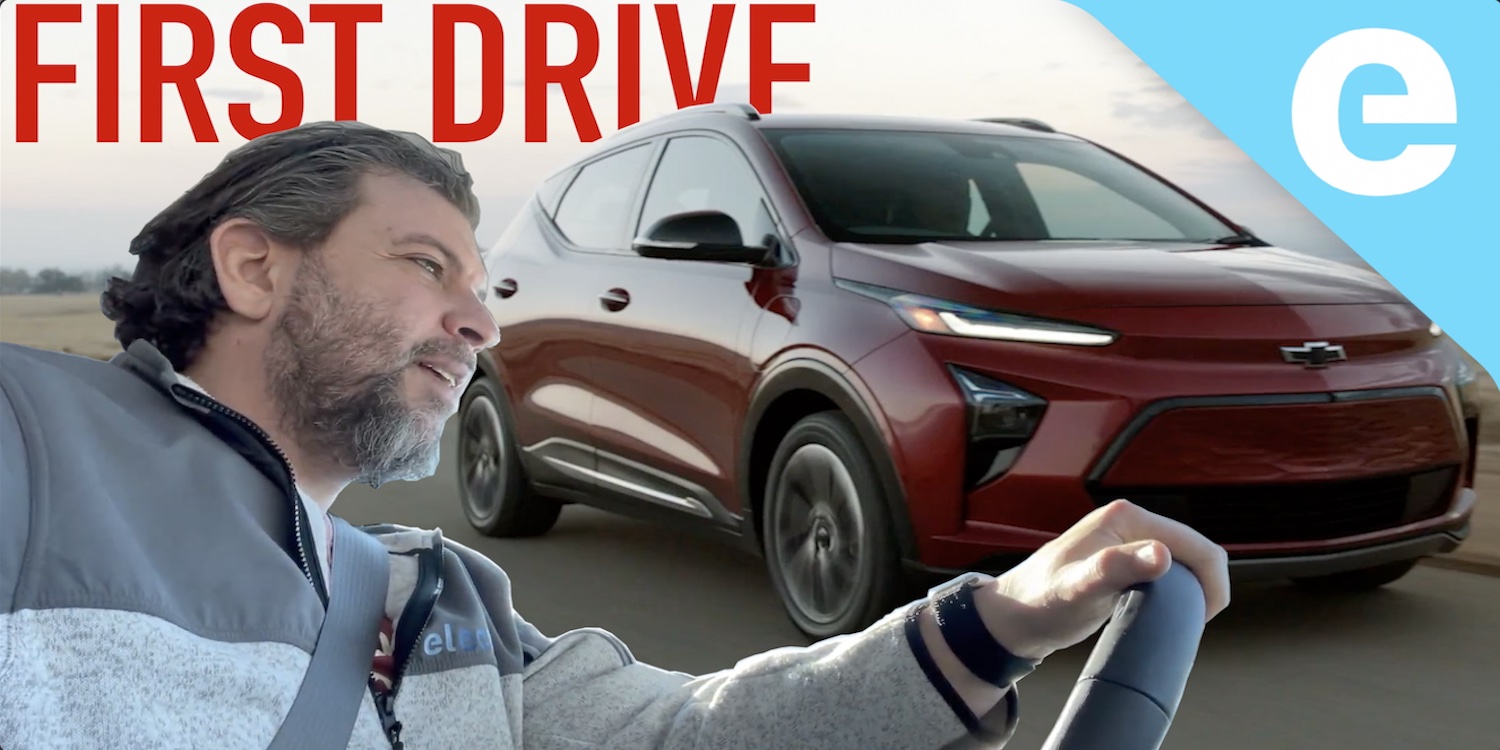 If you’ve driven the Bolt EV from any of the past five years, you’ve got a pretty good idea of what it is like to drive the 6-inches-longer Bolt EUV. It has the same 200 horsepower FWD drivetrain, and that includes the lackluster 55kW fast charging.

But instead of upgrading the powertrain over the past five years (AWD, faster charging?), GM added something important to the driving experience that may even put them ahead of *gasp* Tesla…

GM announced the Bolt EUV last month and gave us a few hours with the updated 2022 car in a drive around New Jersey last week. As a 2017 Chevy Bolt EV owner for three years, the drive was very unremarkable at first. It had roughly the same power, a similar interior with comfier seats, a better-looking dashboard, and 3 inches of additional legroom in the back seat. The longer wheelbase was also a noticeable and appreciated improvement in driving.

I never had a problem with the space inside the Bolt. I thought it was incredibly roomy for its size, and my two preteens fit in the back without issue. We’d even bring the dog in the back on short trips. Problems I did have were snow/tire grip and charging speed related. GM stated outright that they didn’t upgrade anything here due to the need to keep the price of the Bolt down below competitors, and they certainly accomplished that.

And that’s OK. The essentially 2017 Bolt powertrain holds up very well as a value long-range CUV EV. Getting 250-260 miles of real range for an MSRP just over $30,000 is a solid deal. Add in the 200 horsepower pep, (new wireless!) CarPlay/Android Auto, and bigger screen experience, and you are already ahead of the game. You don’t need to look any further than last week’s VW ID.4 review to note that 150kW/200hp is sufficient for an electric CUV.

The Bolt’s looks have always been polarizing, but I think the 2022 EUV is going to be much less so. It fits in with the popular Model Y/Mach-E/ID.4 size group well from an aesthetics point of view, yet comes in at that significantly less expensive price point, starting at $34,000 before state incentives. In the likely event that the Federal tax credit comes back for 2021 GM vehicles, the EUV will come in in the mid $20K range, which is a game-changer.

But there’s something more important here.

I’m just going to say it up front: Super Cruise is the best Autonomous driving software currently out there. Yes, I know Tesla’s FSD is out on Beta testers/Elon’s Twitter fan group. But folks like myself who have even paid for FSD, are stuck on regular old AutoPilot. So that’s all I have to compare it to.

Tesla’s regular autopilot is good and improving with updates. And frankly, before this week, I thought it was the best autonomous software out there. But the mere act of having to put pressure on the steering wheel at all times knocks it down a few rungs. I’ve driven autonomous packages from other makers, including Nissan, Mercedes, Ford, and VW, and none of them have stacked up to Tesla in terms of reliability. Until now.

One area where Tesla has moved the needle is that it has allowed Autopilot to work on regular streets and backcountry roads in addition to highways. In fact, I can even activate it on my driveway (!!). But I find I often have to take over because it is riding too close to the lines or oncoming traffic or not taking a turn sharp enough. This obviously doesn’t inspire confidence in other aspects.

And probably the worst is those phantom braking events, which happen way too often on highways and freak out my passengers to the point where I’m not allowed to use Autopilot on longer trips. On our weekly drive to Vermont, there are a few places where Tesla’s Autopilot will just slam on the brakes without any visible car or obstacle in sight, throwing the whole family and poor dog forward and creating a dangerous situation if someone is close behind us. I’m not alone here either.

We last drove Supercruise in 2018 in the Cadillac CT-6 ICE vehicle. It was impressive for the time and competed with Tesla’s Autopilot but worked on such a limited stretch of roads and was hard to engage even on pre-approved roads. When it worked, it worked well. It didn’t help, however, that it was attached to a crappy gas guzzler. At that point, we thought it was overall pretty even with Autopilot give or take.

However, in admittedly limited testing on New Jersey freeways, not famous for courteous driving, there was not one problem. Because you don’t have to constantly keep your hands on the wheel, you can just fold your hands in your lap or…I’m not really even sure what you are supposed to be doing. You just don’t need to touch the wheel.

Comparatively on Super Cruise, on a four-lane New Jersey Interstate with people around me driving like…you’d expect, Super Cruise delivered. Not one phantom braking incident. No bouncing from left to right. No beeping telling me I’m putting too much/little pressure on the wheel.

I’d compare the Super Cruise experience to being a passenger. You obviously have to keep your eyes on the road ahead of you, or Super Cruise starts freaking out and will eventually disengage and stop the vehicle. Add the smoothness of driving a quiet electric vehicle with gradual regen and no gear changing, and it was a pretty amazing experience.

Almost to the point of boredom. With Covid rules, we were driving separately, and there’s no one to talk to and nothing to do. And this is a first drive, so I really just sat there staring at the road in front (and making videos).

Reading around, I’m not alone. Consumer Reports in October had the same reaction. They also noted that the engagement monitoring function was the major differentiating factor:

A camera-based driver monitoring system that uses eye-tracking technology checks to see whether the driver is looking at the road, and that’s why Cadillac’s Super Cruise is the clear winner when it comes to keeping the driver engaged. Other systems require the driver to place their hands on the wheel every once in a while, but that does not necessarily mean the driver is actually looking at the road ahead.”

Tesla includes internal cameras in now all of its vehicles, so theoretically, at some point, they could switch the monitoring function from the steering wheel to the camera system.

Chevy didn’t include the full suite of sensors in the Bolt EUV that you will need to do lane changes. It saves that for the Cadillac Escalade. That means to change lanes, you turn on the turn signal change lanes, and then Super Cruise takes over again. On an Escalade, Super Cruise does this for you.

However, again, Tesla’s Autopilot will do this for you, but it’s often jerky and inconsistent. Again, the passengers in my car have asked me not to do this.

Chevy has noted that there will be no update to Enhanced available on the Bolt EUV, and owners who opt not to have the $2,500 Super Cruise system added at purchase will not be able to upgrade to Super Cruise later like what Tesla offers.

It is always easier to make armchair quarterback calls from the armchair, but I can’t get out of my mind the thinking of:

There is probably something to derive from this, whether it is GM’s upcoming focus on Autonomy, its supplier and R&D agreements with LG and others, or any number of things that I’m not immediately thinking of.

Maybe I should take it at face value. A large percentage of the US doesn’t have to deal with snowy roads and/or can get by with snow tires. 55kW charging is slow, but by the time they reach 50-70% of charge, a lot of EVs, including Teslas, are down around that number anyway. Most people who only do occasional long trips will barely notice anyway.

But on the other hand, Super Cruise in a non-luxury car is a game-changer. Immediately, the Bolt EUV is, in my experience, the best autonomous driving experience available today.

Tesla, as it has said annually for at least four years now, plans to have FSD available to its drivers by the end of the year, maybe within months. At that point, whenever it is, I will have to re-evaluate my decision. But for my money right now, Super Cruise beats Tesla’s Autopilot in real-world usage. And to get that on a value-priced EV with a powertrain with 5+ years of real-world testing is just icing on the cake.