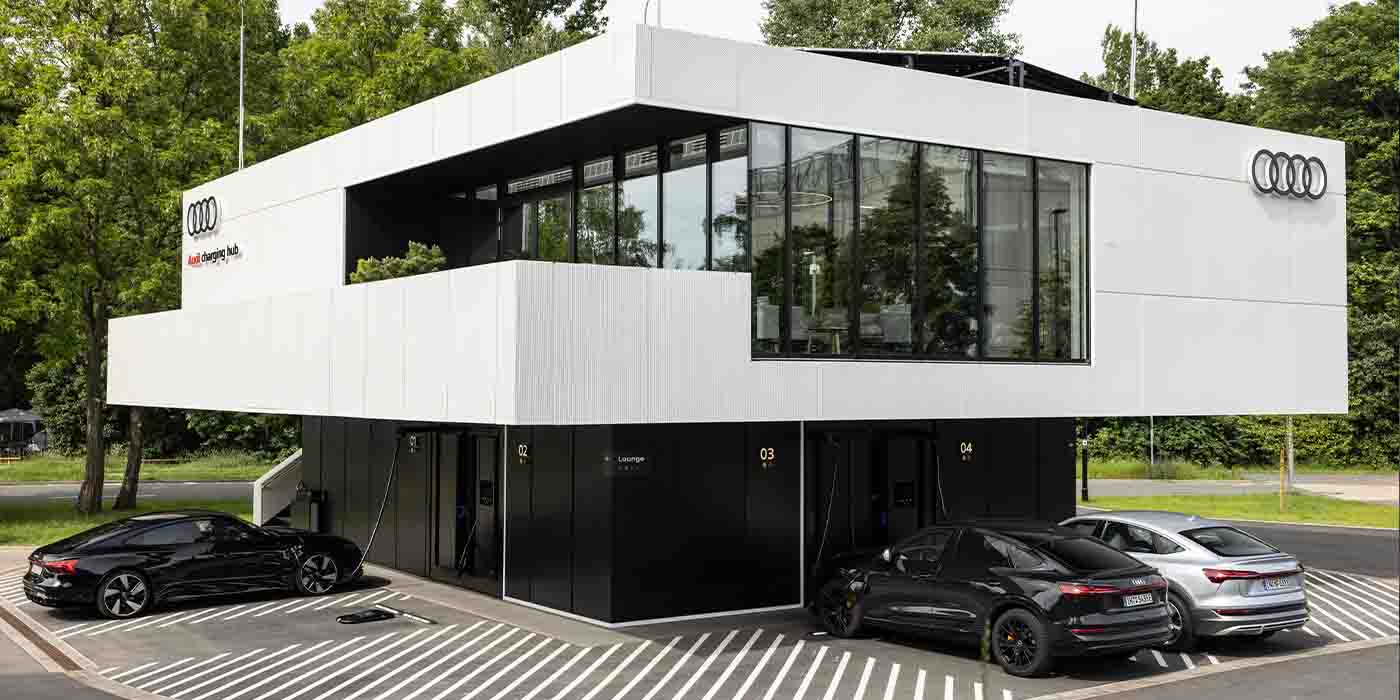 Following a six-month pilot phase of its first charging hub site in Nuremberg Germany, Audi has seen a number of return customers and “overwhelmingly positive” feedback. As a result, the German automaker has announced plans to expand the charging hub model to other sites, beginning later this year.

Last summer, Audi AG announced an electrification strategy that included an end date of 2033 for all new ICE models. To prepare for this growing group of Audi EV drivers, the automaker began planning new creative measures to help customers keep their vehicles charged, no matter where they live.

In late December of 2021, we covered news of Audi’s modular container cubes that can be combined to form hubs that can be easily assembled and disassembled to any desired footprint. Power is stored in recycled lithium-ion batteries from dismantled test vehicles, alleviating some dependency on the local electrical grid.

To initially showcase and test this design model, Audi opened a charging hub pilot project that included a swanky lounge and food delivery. With nearly 2.45MWh of interim storage from the batteries, the entire Nuremberg site only needs a 200kW connection to a low-voltage network to keep the storage modules filled.

In January 2022, Volkswagen Group Chair of the Board of Management Herbert Deiss visited the Audi charging hub site and experienced the concept for himself. Following his visit, Deiss shared the following positive feedback on his LinkedIn page:

Charging must be pleasant, reliable, and fast. AUDI AG is setting a new milestone with their new charging hub!

Reserve the charging station in the app, arrive, plug your car into the fast charger, go to the lounge, enjoy coffee and good conversation. I am absolutely thrilled with the new Audi charging hub in Nuremberg. A concept that sets new standards!

Deiss is not alone either. According to Audi’s latest press release, a larger number of EV drivers not only tested out the charging hub but returned more than once, opening the door for additional sites.

Audi expanding charging hubs to sites in and out of Germany

Audi might be onto something here. According to the German automaker, repeat customers to the hub accounted for about 60% of charging sessions, and feedback following the pilot phase was “overwhelmingly positive.”

During the pilot phase between January and April 2022, Audi registered approximately 3,100 charges at its Nuremberg charging hub site. The sessions were spread across six reservable high-power piles, averaging 24 charges totaling 800kWh per day.

The forty-square-meter lounge sitting atop Audi’s charging cubes saw an average of 35 visitors per day – a number that increased as the pilot phase went on. Audi charging hub project manager Ralph Hollmig said:

The numbers and positive customer feedback demonstrate that our concept of offering flexible, premium quick-charging infrastructure in urban spaces was spot on.

Due to its early success and limited draw from the electrical grid to operate, Audi announced today that it will expand the charging hub strategy to additional sites, beginning in Zurich. The next Audi charging hub system will include four roofed charging points at two power cubes to fit the tighter footprint available in Zurich’s banking and insurance district. It is expected to begin charging operations in the second half of 2022.

Audi is currently seeking attractive sites close to downtown areas as well as on-site partners for its new charging hubs.