A commuter electric scooter with a hidden trick underneath! Reviewing the ANYHILL UM-2 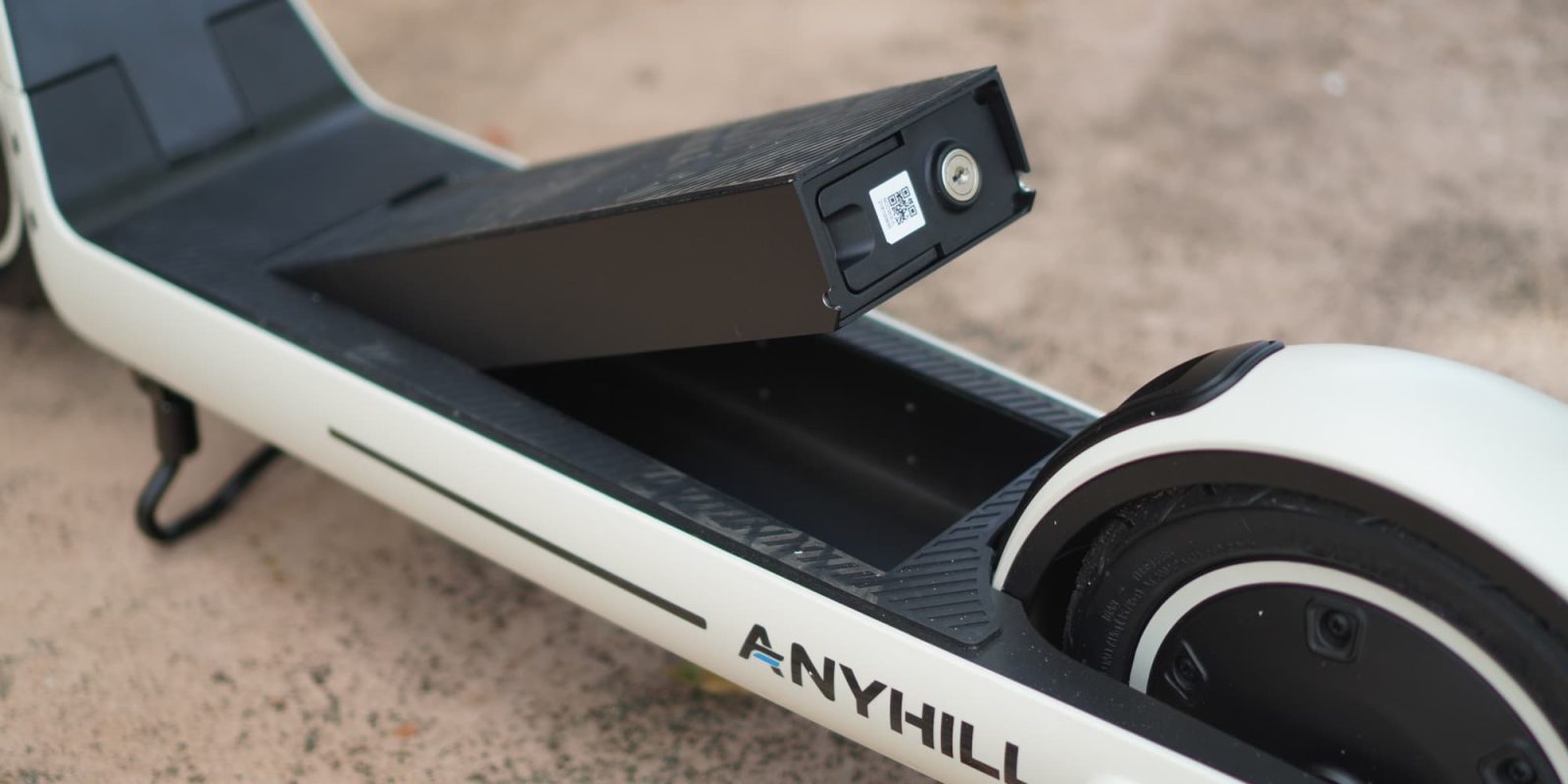 I’ve set foot on just about every budget electric scooter on the market, and it’s not very often that I get to see something genuinely innovative and new. But that’s exactly what the ANYHILL UM-2 electric scooter delivers: a novel innovation in the form of a pop-up removable battery hidden below the deck.

Most electric scooters stuff their lithium-ion batteries in the deck under where the rider stands. It’s the logical location as it keeps the center of gravity low and is already a fairly wide area.

But almost every scooter that does this uses a built-in battery that isn’t user-accessible and can’t be removed by the rider for charging or security. That means that when the battery is empty, the entire scooter has to be brought to the charger. It also means that a few years from now when the battery is worn down and doesn’t hold much charge anymore, it can’t be replaced. Or at least it can’t be replaced by the user.

But the ANYHILL UM-2 solves that problem with a snazzy pop-up battery compartment that lets the user unlock and remove the battery from the scooter. It’s a neat trick and one that you can see in my succinct video review below. Keep reading afterwards for all of my thoughts on this new electric scooter.

More than just a removable battery

There’s a lot more here than just a removable battery, though admittedly that is the big takeaway (no pun intended).

A removable battery simply opens so many possibilities. You can swap in a spare battery to double your range. You can leave the scooter in your garage or outdoor parking (when securely locked) and only carry in your battery to charge – which is a huge benefit for riders who live in a walk-up apartment. And you can replace the battery with a new one instead of throwing out the scooter when the original battery reaches the end of its useful lifespan.

With around 25 miles (40 km) of range, it will likely take riders many years to go through enough battery cycles to feel any appreciable degradation of the battery, but it’s always nice to know that you can easily swap in a new battery when the time comes.

But of course there’s a lot more to talk about here than just a removable battery.

The scooter itself offers great performance, regardless of the type of battery that its engineers gifted it.

That speed is possible thanks to a fairly powerful motor, at least as far e-scooters go. The 450W rear hub motor has a peak power output of 750W. That’s a full horsepower in a 44-lb. (20 kg) package. Not too shabby!

The scooter even gets up to speed fairly quickly too, unlike lower-power scooters that tend to begrudgingly lug their way up to full speed.

The powerful motor also means powerful electric braking. The second throttle on the left side of the bars (helpfully colored red) engages the electric braking, which can nearly bring the scooter to a stop by itself. There’s also a hand lever to engage the front drum brake, but if you plan ahead then you can get away with almost entirely relying on the motor braking.

Drum brakes might sound like old tech, and they are. But they’re one of those oldies but goodies. They are sealed from elements, meaning they work just as well in rain or shine. They don’t require adjusting, unlike disc brakes. And they don’t tend to fade in braking power like disc brakes as they heat up. So it’s a great solution for low-maintenance brakes that simply work all the time.

The other big standout feature that I don’t see on many scooters is the wide kickstand. Unlike the little side stands that most scooters use, the ANYHILL UM-2 has a full-width kickstand that holds the scooter straight up and down. That makes it much more stable when parked, and isn’t likely to tip over on the sidewalk or in your garage. It adds a bit more weight than a tiny 2-inch kickstand foot, but the stability benefit is worth it.

You can also simply fold the scooter up if you don’t want to leave it standing up on its kickstand, and the folding mechanism even lifts the front wheel up, making the scooter more stable when folded as well.

At a price of $899, the UM-2 is a bit more expensive than most other low-cost scooters. But with better specs, a better designed battery, and good build quality, I can mostly see where much of that extra cash is going. A Benjamin or two cheaper and I’d call this an amazing deal. At its current price, it’s a good deal but not blowing me away.

I probably wouldn’t buy this scooter if I was trying to stick to a tight budget, but I would if I had a bit more cash to spend and wanted an electric scooter that was future proofed (assuming the company is still around in a few years when I would want or need a new battery).

What do you think of the ANYHILL UM-2 electric scooter? Let’s hear your thoughts in the comments section below.