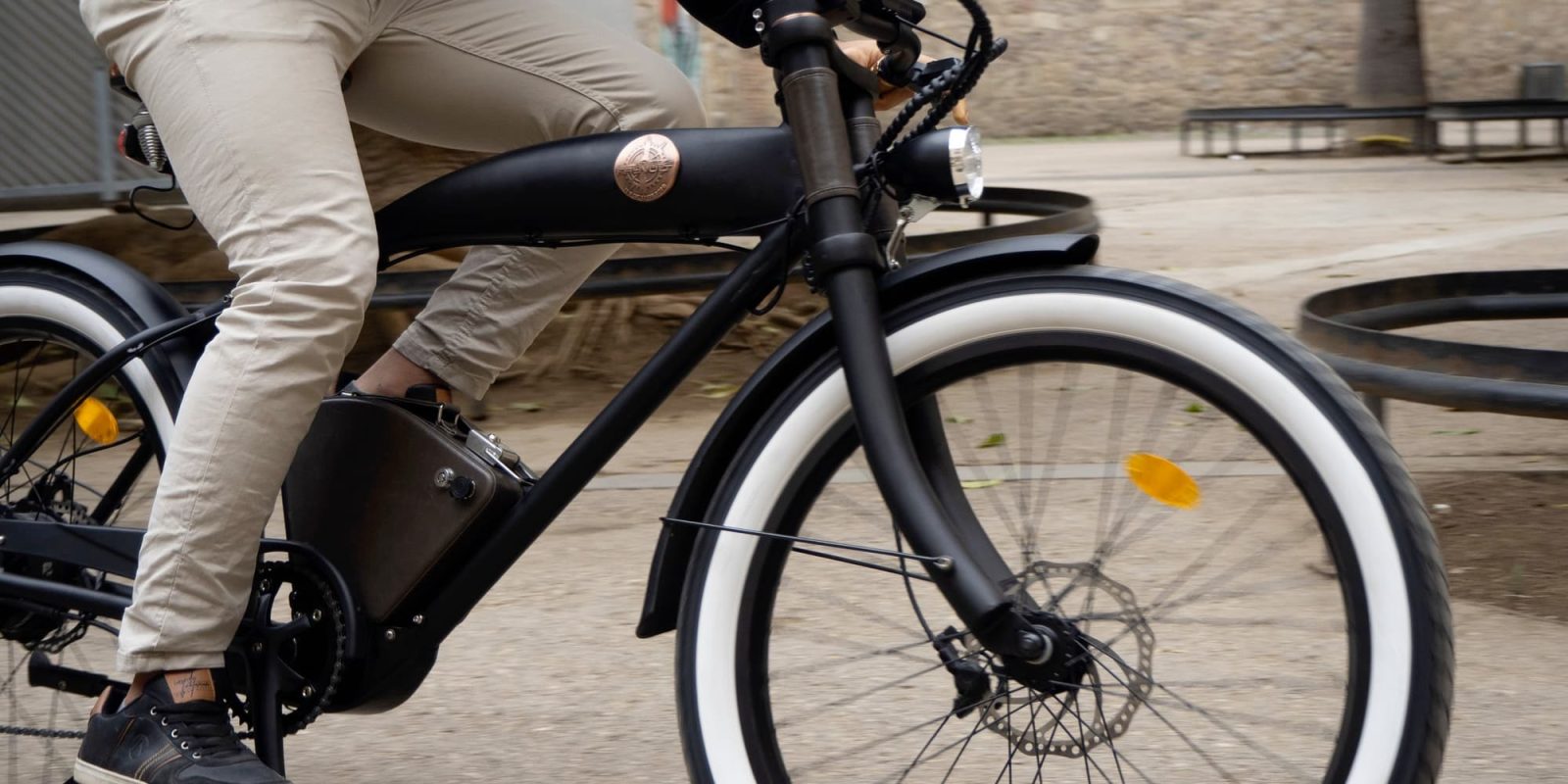 Barcelona-based Rayvolt not only has some of the most beautiful electric bikes I’ve ever seen, but also designs its own technology to ensure that those e-bikes offer industry-leading performance and user-experiences. That kind of combination of beauty and brains is rarely seen outside of a Hollywood blockbuster, which is why I just had to stop by Barcelona in person to check out the latest from Rayvolt.

The company kindly invited me out to its yearly press and dealer meeting, which returned after a two-year hiatus caused by COVID-19.

Back with a bang, the event showcased Rayvolt’s newest developments and exciting news about the future direction of the company. On display in the brand’s showroom were many of the stunning electric bicycles we’ve come to know and love, but also several new models with a new twist.

Check out my brief video below to see what Rayvolt had on hand, or keep scrolling to read even more about these head-turning electric bikes.

First up, the Rayvolt Cruzer is a classic in the brand’s lineup and features stretched cruiser styling with motorcycle design accents. Of all the bikes that carry Rayvolt’s (literal) brass seal, this is the one that likely best encompasses the brand’s design ethos.

The bike is massive, though it is also available in a shorter wheelbase version which smaller riders will likely find more comfortable. Both versions feature the same styling and leatherwork details that you’ll quickly see are a theme at Rayvolt.

Other models – like the Ambassador – are a bit more subdued, at least in mass.

Narrow frame tubes and tires give a more elegant urban look to the Ambassador bike, while still retaining the classic Catalonian leatherwork and shiny brass features around the bike.

The bike is a much lighter weight model designed for city riders that want to retain that classic fixie look while still embracing the company’s signature styling, right down the the leather handbag that pulls double duty as the removable battery case.

Branching out into broader styles of e-bikes, models like the Ringo offer more of a moped take while the Beachin’ model explores a traditional fat bike design for cruising the coast (though “traditional” shouldn’t imply that it strays very far from Rayvolt’s popular aesthetic).

And that’s barely scraping the surface of what Rayvolt has to offer.

The company’s Torino e-bike offers an even shorter wheelbase version of the Cruzer and swaps the wide tires for more balanced 2″-ish rubber to create a nimble city ride. The Trixie is a front-loading electric cargo trike with enough room for several kids and/or pets up front, all while still embracing the design cues that make Rayvolt stand out from the crowd.

The Clubman offers a sophisticated motorcycle-inspired design with vintage-looking white wall tires to complete the package.

The list just keeps going, as did the room after room of eye-catching e-bikes that look as good on a museum shelf as they do whizzing down the road. Check out some of the beautiful collection in the gallery below.

Not content with just electric bicycles, Rayvolt is even going full cruiser motorcycle.

The company has developed multiple prototypes for light and medium-weight electric motorcycles that – yep, you guessed it – also embrace the Catalonian design cues that adorn Rayvolt’s electric bicycles.

My favorite model includes four battery bays beneath the frame that offer huge battery options for longer range riding, to the tune of up to 27 kWh of capacity. That’s more than Energica’s largest capacity batteries and around twice the size of Zero’s largest batteries! Plus, it offers the classic cruiser motorcycle geometry for a foot-forward ride. That’s a rarity in the electric motorcycle industry.

Now this is a bike I can ride everyday!

But it’s not just the designs that catch the eye, at least not for those that appreciate what powers these beautiful e-bikes.

Rayvolt’s technology is industry leading for the simple reason that they don’t buy off-the-shelf drivetrain parts, but rather design their own controllers, hardware, and software to work together seamlessly.

The company’s custom designed motors and pure sine wave controllers offer the highest efficiency and lowest noise level possible. A combination of sensors ranging from torque sensors in the pedal assist system to heat sensors in the motor give the controller realtime access to key data from the bike’s most important systems.

All of this has helped Rayvolt design in new technology and features, like the ability to modulate the power of the regenerative braking in the motor simply by pedaling backwards faster or slower. That regenerative braking feature has also been key to the company’s development of its RegenFit program, which allows riders to put their e-bike on a stationary roller and use it at home like an exercise bike, recharging the battery while burning calories.

The company’s in-house designed EIVA 2.0 app that interface’s with the bikes’ software has been recently updated as well, giving riders even more control. The open-source Android-based app can be installed directly on the bikes’ displays, meaning owners can add their own Android apps as well. Want Google Maps directly on your e-bike’s display? That’s now possible, at least if you have a Rayvolt bike with built-in EIVA display.

While Rayvolt is of course known for its iconic design, the company’s technology has lead it to spin off a new brand known as eXXite for its more techie-looking rides.

The actual technology behind the eXXite e-bikes is largely identical to that found in Rayvolt’s line of vintage-looking e-bikes, but it gets wrapped in a much more modern package that will likely appeal to a different type of rider.

For example, the X One electric bike has some Rayvolt Cruzer recessive genes in it if you look closely at a few of the frame tubes, but then it goes its own direction entirely for a much more modern look.

After first being unveiled in 2019 and then being derailed in 2020 when COVID-related supply chain disruptions saw important components in its design delayed and then cancelled, such as the unique brake levers and fork that were imperative to the bike’s design, the X One is now back on track and hitting production.

I had the chance to test out one of the first models, which you can see in my video from the event above.

The bike feels nearly as large as the Cruzer but has its own unique flair to it, such as the turn signals mounted in the handlebar ends. At the same time though, the technology is unmistakably Rayvolt’s. When I engage the regenerative braking and crank up the power, it feels like I just popped a parachute out the back even though the brake pads haven’t even touched the discs yet.

The new brand eXXite line is now expanding into even more models, including a more traditional-looking belt-drive commuter bike for the city and a neat take on a standing electric scooter. The scooter includes a shield in front that is more reminiscent of a Vespa-style scooter. Despite being designed as a standing scooter, eXXite is planning a cargo box that will be mountable on the back of the scooter and just might offer a bit of a seat to lean against, almost turning the scooter into a seated version.

And of course the EIVA 2.0 app system is available on the eXXite line as well via the built-in Android display, meaning riders can install any Android apps they wish directly to their e-bike or e-scooter screen.

Both the Rayvolt and eXXite brands are built on a similar foundation, but it is obvious that they are going their own ways when it comes to design and branding.

Sharing the same technological foundation while branching out to different markets seems like a smart move though, making it easy to co-develop new tech and features that can equally benefit very different customers.

With so many interesting things on display (beautiful e-bikes, awesome motorcycles, novel scooters, the list goes on!), I almost don’t know where to turn next in order to follow Rayvolt and eXXite’s future paths. There’s a lot to be excited for here, and I’m sure we’re going to be seeing big new things coming out of Barcelona soon.