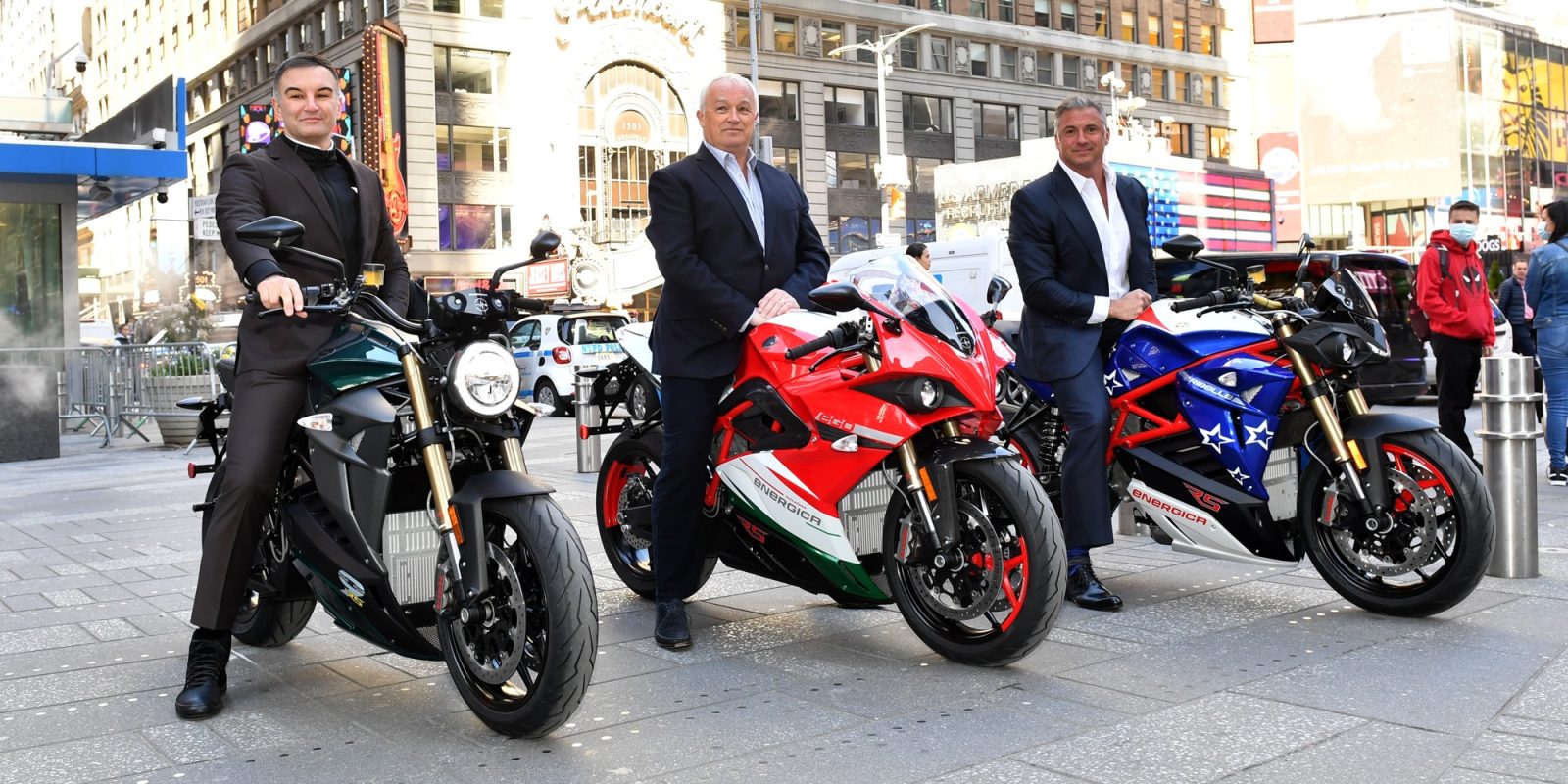 After electric vehicle company Ideanomics celebrated its successful acquiring of Italian electric motorcycle company Energica last month, the duo hosted an investor and analyst day at the Nasdaq this week. With Electrek in attendance, we heard first hand from the leaders of the two companies about how Energica’s industry-leading technology will now benefit Ideanomics other electric vehicle verticals, and vice versa.

Oh, and we snagged a pretty awesome ride on a 150 hp electric motorcycle too.

But first, the event started off with a ceremonial ride of the three electric motorcycles in Energica’s lineup.

You can see it along with my recap of the day in the video below.

One look at the stylish Italian racing bikes would have you believe that Energica leads on its design. But in fact, the company has spent years honing its technology as its unique selling point, boasting a sophisticated proprietary vehicle control unit (VCU) at the heart of each bike.

That VCU is wrapped in a massively powerful 110 kW (150 hp) liquid-cooled motor and high capacity 21 kWh battery, but it’s really the technology that sets Energica apart and made it such a valuable target for Ideanomics.

And that was by design. Energica CEO Livia Cevolini explained that based on the company’s Italian birthplace in the heart of Motor Valley, she knew that meant that it had quite a reputation to live up to.

“When you grow up in the Italian Motor Valley, everyone is expecting you to be perfect. Because over there there are only perfect companies doing perfect things. Just to name a few, we grew up looking at Ferrari, Maserati, Lamborghini, Ducati… and so what people are expecting of us, and what we are expecting of ourselves, is to be perfect. To build the perfect motorcycle. That’s what we’ve strived for since the beginning.”

And while “perfect” is a fairly high target to aim for, a quick review of the specs shows that Energica might be closer than anybody right now. Livia wasn’t shy about that point:

“We have the highest torque, the highest power, the longest range thanks to our 21.5 kWh battery that is unique in the market, and we have the fast charging. We are the only one now to have the possibility for customers to choose from CHAdeMO and CCS protocols for fast charging. That means we are able to offer fast charging in Europe, Asia and the Americas. There are no other electric two-wheeler companies in the world that can offer this.”

The company doesn’t just beat out other electric motorcycles but also crushes top ICE models. For example, Energica’s bikes weigh less than a Hayabusa and yet lay down over 60% more torque.

The Italian motorcycle company’s performance lead has existed for years, but the company’s smaller size compared to heavyweights like Zero and Harley-Davidson has often kept it from receiving its fair share of the spotlight. But with impressive growth including doubling from 50 to over 100 employees in the last year, and now the injection of funding and support from Ideanomics, that looks set to change.

In fact, it appears that Ideanomics has just as much to benefit from Energica as the other way around. Ideanomics’ funding is critical to Energica’s expansion, but the company’s resources continue beyond mere capital. CEO of Ideanomics Alf Poor explained how the two companies immediately began benefitting from one another.

“Semiconductors have been a problem for everyone. It doesn’t matter if you’re a major global OEM or a company in the Ideanomics family. We were looking under the couch cushions for microchips and our supply chain teams were able to find them for Energica, preventing a manufacturing shutdown. And when you think about a shutdown, it doesn’t just impact production. It impacts families and a lot more. And so Ideanomics works hard, with the fabric of what we do being that each company leans into each other.”

And that two-way street will likely see Energica’s technology flow into other Ideanomics-owned companies like its Solectrac electric tractors and Treeletrik electric scooters.

In fact, that’s the whole idea behind Energica’s new endeavor known as Energica Inside, which will help non-competing companies use Energica’s proprietary tech to jumpstart their own electric vehicles. Much the way Polaris kicked off a revolutionary new RANGER XP Kinetic side-by-side using Zero Motorcycle’s electric drivetrain, Energica’s own tech could find its way into all sorts of EVs from scooters to zambonies to whatever else your imagination can dream up.

Having had the chance to test out a few of Energica’s electric motorcycles earlier this week, I can vouch for the drivetrains. They’re a thrilling combination of precision control and power. I’ll have more to say on my test ride experience soon, and I’ll be back with a video of the ride as well in an upcoming article.

For now though, I can say that I’ve seen what Ideanomics must have already known. In Motor Valley in Italy, there’s an undervalued electric motorcycle company building bikes with the best performance specs in the world.

As CEO of Energica US Stefano Benatti explained to me, the company has doubled its 14 US dealers to 28, but hasn’t announced the new dealers yet because it is still waiting on bikes to arrive in stores:

“We don’t just want to put a pin on the map in our website and brag about having more dealers if we don’t have bikes there yet. We want customers to actually be able to come and see the product, which is even more important to us.”

With more bikes expected to arrive in the US in the coming weeks, expect to see that dealer figure grow quickly – which is a good thing, because now I’m hankering for my next Energica ride!