Wolf King GT Pro review: How I reviewed a 63 mph standing electric scooter and lived to tell about it 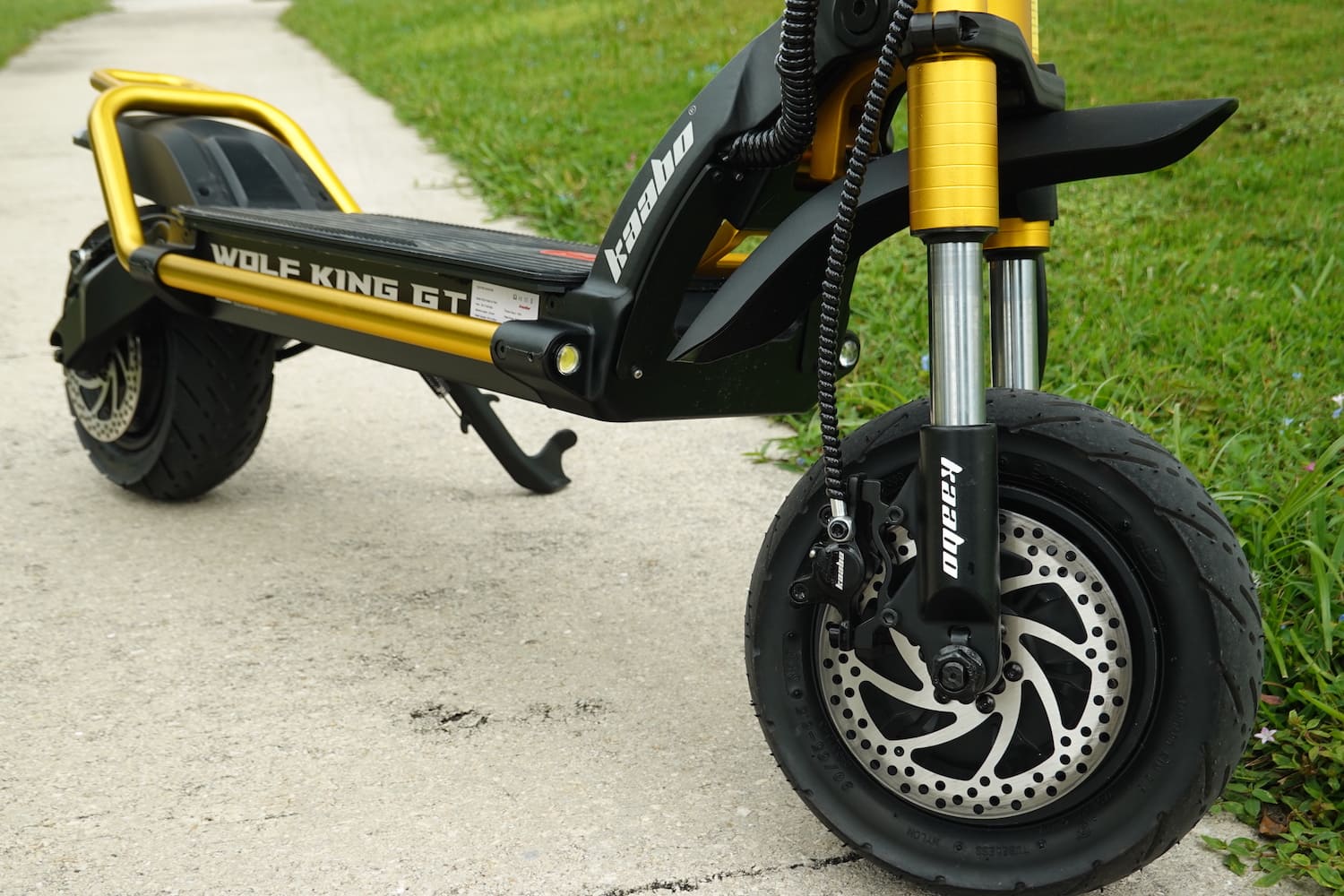 The Wolf King GT Pro from Voro Motors is one of those “be-all, end-all” of the electric scooter world. With its high power and high speed plus a rugged full-suspension design, this thing should be the weapon of choice for anyone in search of a seriously high performance electric scooter.

I’m going to start right off the bat and say that if you’re going to ride a high speed electric scooter like this, please take safety seriously.

Sure, I may sometimes don a typical scooter helmet and t-shirt while doing city speeds around my neighborhood. But once I hit higher digits, I switch to my motorcycle gear including my AGV K5 motorcycle helmet, my Dainese Air Flux D1 mesh armored motorcycle jacket, and my REV’IT! Canyon armored leather motorcycle gloves, not to mention long pants and boots.

In fact, my Dainese Smart Jacket airbag vest to wear under my outer jacket isn’t a bad idea either. As they say, dress for the slide – not for the ride.

Far be it for me to tell you what to wear, but just consider that you’re on a scooter capable of doing highway speeds while standing inches above the ground.

Safety note aside, let’s jump into the meat of this review. This is an incredible electric scooter that you’ll definitely want to watch in action. Check out my video review below, then keep reading beneath it for my complete thoughts on the Wolf King Pro GT.

Fast and fun on a high power electric scooter

This is of course not an electric scooter for the faint of heart.

Fast and powerful scooters are powerful tools for commuters and thrill-seekers, but you’ve got to have some serious passion for power – or perhaps a few screws loose – to step on the tall deck of this bad boy. For me, it might be a bit of both.

But just because the scooter is fast doesn’t mean you have to ride it fast. This is an important point that needs to be stated. The higher power all-wheel-drive setup can achieve fast speeds, sure, but it’s just as useful for climbing ultra steep hills without slowing to a crawl like most other scooters. Voro Motors even says it can climb a 45 degree incline, which is a 100% grade. Considering the highest grade road in the US is closer to 40%, I’m not sure where I’d test that claim, but the scooter is so powerful that I’m just going to believe them. It feels like it’d climb up a wall if the tires were sticky enough.

So while this is a fast scooter, you can ride it at whatever speed you like. And that massive battery can either provide super high power or just keep you riding for dozens and dozens of miles longer without needing a charge.

But if you’re like me, you’ll be curious about the faster speeds the Wolf King GT Pro can offer. And let me say this right here and now: No matter how fast you think this is going to feel, its even more impressive than that. After getting up into the 50’s of mph, it was like I was in a video game and just along for the ride. Though the fact that my wife’s face kept appearing in my thoughts and reminding me of what a nice life I currently have and not to risk it meant that I never actually pushed the scooter to its actual 63 mph (101 km/h) top speed.

Even in the 50’s of miles per hour though, I got the point; this thing is damn fast and even more powerful than you can imagine. Combined with the powerful regenerative braking and hydraulic disc brakes, it also has the stopping confidence that a fast scooter needs.

It would absolutely serve any electric scooter commuter well, and it’s a verified blast and a half for recreational riding.

The scooter I tested came with street tires, which was great considering I mostly ride streets. But of course, I did a bit of off-road testing as well to see what it could do. The tall ground clearance and hydraulic suspension make it great for bumpy paths, and the powerful lights actually light up the ground in front of you instead of just being little dots of lights to tell cars that you exist.

The street tires were woefully unequipped for anything slick off-road, and dewey grass nearly put me on my tush multiple times. I credit the scooter’s handling more than my mediocre riding skill with me miraculously staying up when the street tire traction on wet grass would betray me.

So if you plan to do some serious off-roading, go for the off-road tires. That shouldn’t really need saying, but there you go.

For most people, though, this will be an on-road urban assault type of electric scooter. That’s where it seems to feel most comfortable to me, and the scooter’s design matches that utility. The deck is so large that it deserves its own zip code. The large size is both a design choice and necessitated by the massive 2.5 kWh battery that could provide a week of charge depending how you ride.

The thumb throttle is responsive and highly gradated, meaning small adjustments actually give you fine tune power variation. The scooter’s rubberized buttons are easy to use, even while wearing motorcycle gloves, and the beautiful color TFT screen gives all the important information right up front.

Some scooters don’t tell you when you’re in Eco or Turbo mode, or whether or not you’ve got all-wheel-drive engaged. But having all of that info on the screen is both a safety and convenience feature, so I’m glad the Wolf King GT Pro includes it.

Even the folding mechanism is super rugged. It locks in with a rigid pin and big handle, meaning you’d have to somehow sever solid steel to fold the scooter while it’s in use. That’s the kind of confidence I’m looking for.

I found that I didn’t really fold the scooter much, though, since the 115 lb machine isn’t really meant to be very portable. If you needed to, you could fold it to fit in a car, though, I pretty much just treated it as a permanent vehicle that did its own transportation. I don’t fold my motorcycles either, for the same reason.

If I had to search for complaints, I’d say the heavy weight and somewhat high price of the Wolf King GT Pro are the only dampers that rain on this parade.

The weight simply means it’s a royal pain to lift it, and the $3,599 price is certainly fair for what you’re getting when compared to the rest of the market, but is still going to price out a lot of interested riders.

Then again, high powered electric scooters have always been a pay-to-play game, as these are specialized tools that aren’t produced by the millions like lightweight commuter scooters.

If you’ve got the cash and the cojones though, Voro Motors will hook you up with the ride of your life.