Lime urges people to ‘Break Up With Cars’ in new campaign, offers rewards for ditching cars 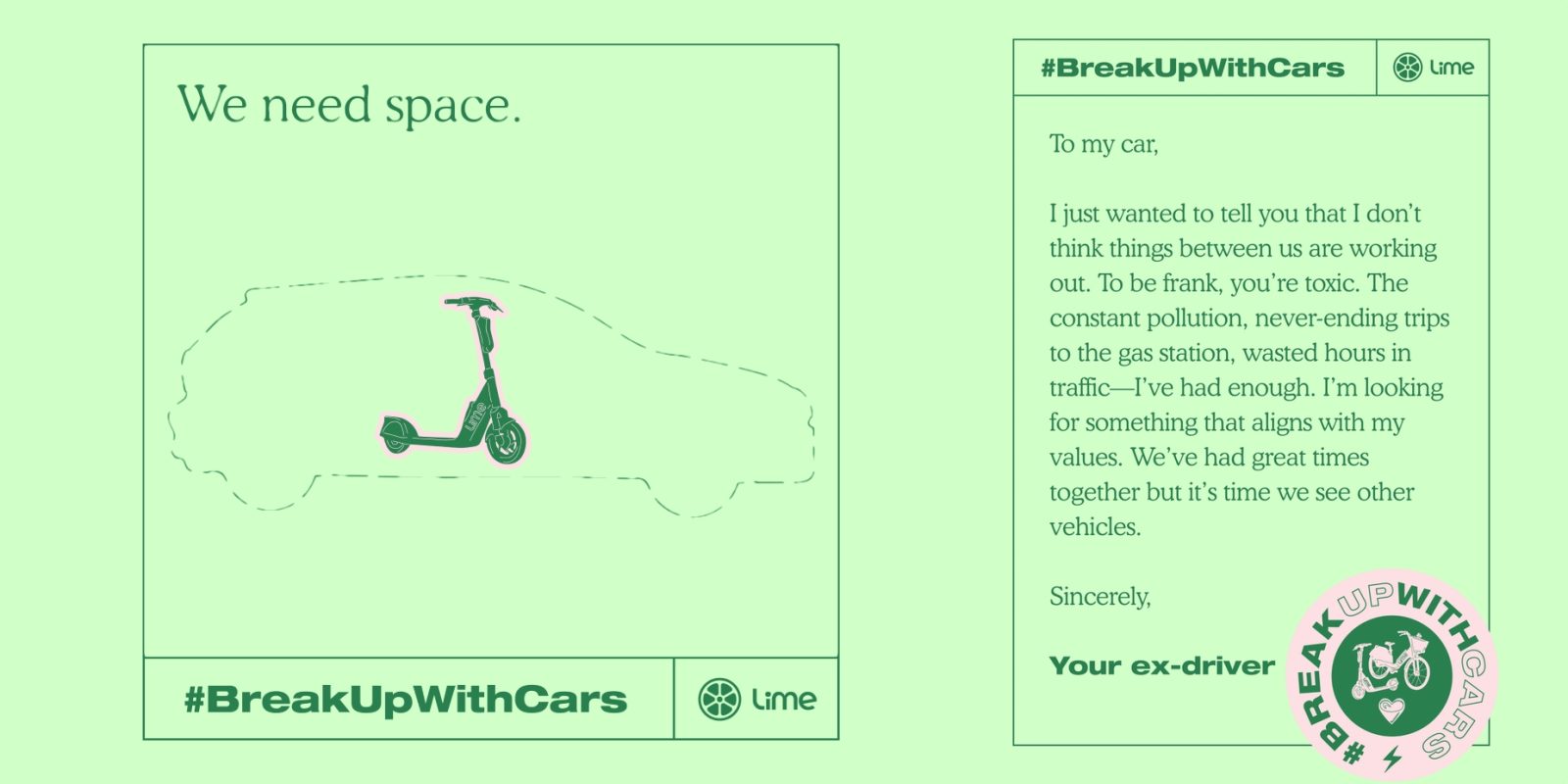 The world’s leading shared micromobility company, Lime, has just launched a month-long campaign under the tagline ‘Break Up With Cars.’

If you’ve been wondering whether a car may be more harm than good for you (and for your city), then Lime is trying to incentivize your way over the edge towards going car-free.

Car-free is a growing trend among urban residents who have found that the hassles and environmental downsides of car ownership in cities outweigh any benefits.

With transportation contributing to around 20% of global carbon emissions, the environmental impact of car ownership increasingly weighs into the decisions of drivers. Even electric cars are still much larger energy guzzlers than smaller personal electric vehicles like e-bikes and e-scooters, not to mention that electric cars contribute nothing towards reducing traffic and congestion in cities.

Now with many urban areas featuring plentiful shared electric scooters, e-bikes, and e-mopeds like those provided by Lime, going car-free is surprisingly easy to do in densely-populated cities.

For just a few bucks, you can cross town on a lightweight personal electric vehicle instead of taking a car. It usually costs less than it would have to park there anyways, let alone the sky-high price of gas or the cost of car registration/insurance/maintenance, etc.

To sweeten the pot during Earth Month, Lime is incentivizing commuters who pledge to give up their car for a period of time ranging from a single day to the entire month.

Rewards vary, and include up to $3,500 worth of Lime rides, limited “Break Up With Cars” t-shirts, Bern helmets, and other Lime swag.

“With transportation a leading source of global carbon emissions and more than 1.3 million people killed in car crashes annually worldwide, it’s past time to end our toxic relationship with cars. We’re excited about this creative campaign’s potential to move people away from car use and onto more sustainable transportation options. It’s a reminder that freeing oneself from the costly and time consuming headaches of car ownership is not only a healthy step for drivers, but good for cities and the planet as well.”

The company’s latest electric bike was unveiled earlier this year with increased power and an automatic shifting transmission.

Such micromobility and scooter sharing companies are helping add to a larger concept of cities designed for a post-car world. While cars are likely to remain an important part of the transportation mix, their benefits are increasingly undermined in crowded cities.

Cities like Paris are leading the charge with car bans in the city center, which is becoming an increasingly popular way for governments to create walkable cities that are friendly to pedestrians and personal vehicles like bikes and scooters.

Many countries offer tax incentives to citizens that choose to ride bikes instead of driving cars.

As walkable cities become a higher priority for urban residents, perhaps we won’t need incentives to give up our cars.

But until then, Lime would like to have a word with you about free rides and t-shirts.