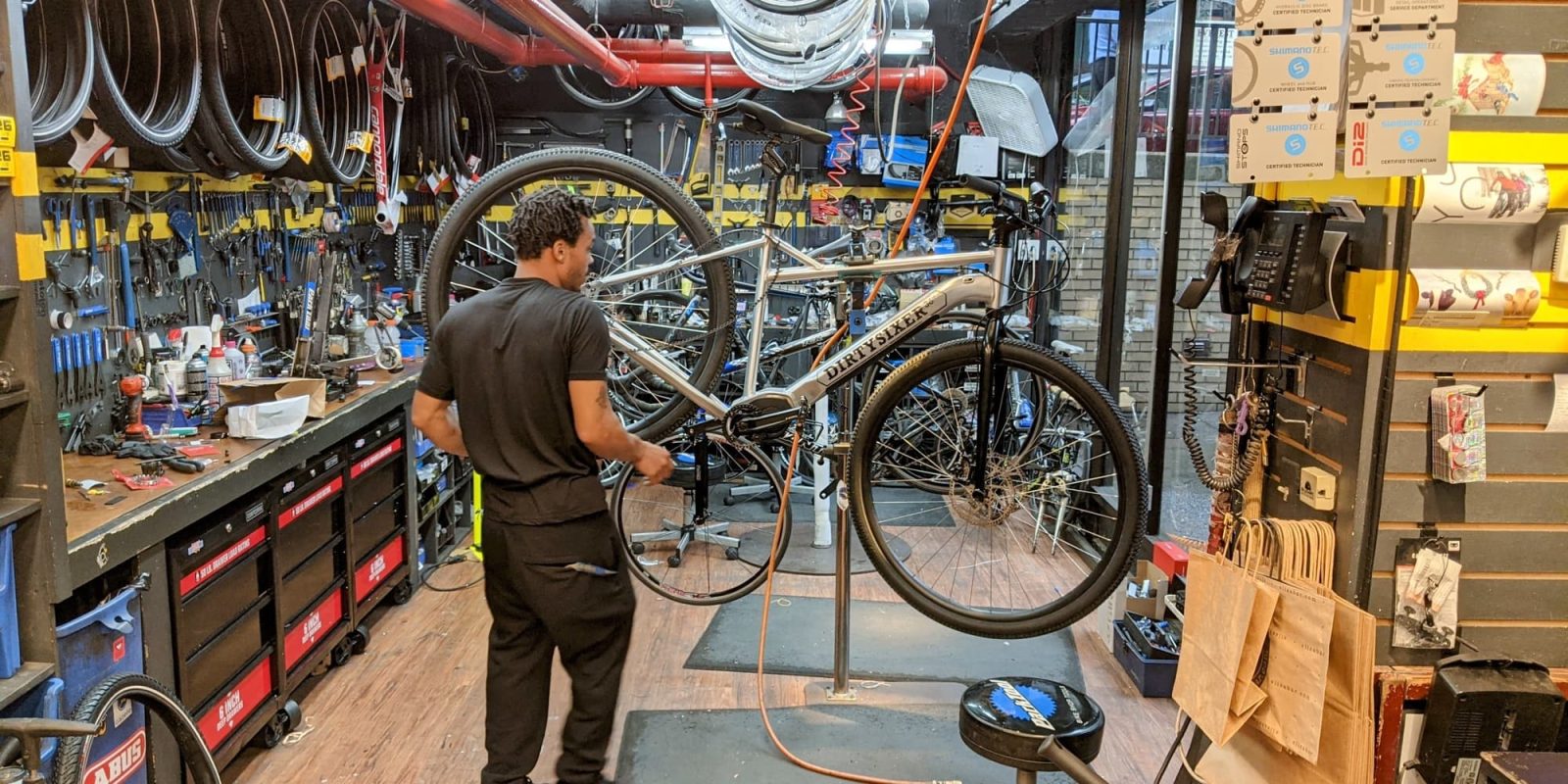 Many electric bicycles come in multiple frame sizes to fit both short and tall riders. But like any good bell curve, the extreme ends of the spectrum often get left out. DirtySixer may not be able to do anything for the vertically challenged riders among us, but the favorite bike company of walking giants like Shaquille O’Neal has just released a massive electric bicycle built on 36″ wheels.

DirtySixer, a bicycle manufacturer founded by the 6’6″ (198 cm) David Folch, has been building bicycles for particularly towering individuals since 2013.

DirtySixer riders include such famous names as Shaq, Lebron James, and Kevin Durant, but you don’t have to be a pro baller to ride a bike with massive 36″ wheels. You just have to be extra leggy.

For nearly a decade, DirtySixer’s massive bicycles have been purely Wheaties-powered. That is, until now. Because as Folch explained in a conversation with Electrek, DirtySixer is going electric and releasing its first massive e-bikes.

And fittingly, the new model will be known as the eDirtySixer.

The eDirtySixer is still in its prototype stage, but this isn’t merely a scaled-up e-bike. From the specs that Folch shared with us, it is shaping up to be a very nicely outfitted e-bike as well.

The colossal e-bike will feature a Shimano E8000 mid-drive motor paired with Shimano’s internal yet removable 500Wh batteries. The motor may be fairly standard, but you’d expect there to be a few extra links in that chain compared to a “normal” e-bike. Except for one little detail: there’s no chain at all.

Instead, the Shimano mid-drive motor is connected to the rear wheel via a Gates carbon fiber-reinforced belt drive. Compared to a typical chain, the carbon belt is quieter, cleaner, and maintenance-free, capable of lasting for tens of thousands of miles.

The belt gets paired with a fancy Rohloff XXL 14-speed internally geared hub, giving riders a high-end transmission that can shift from a standstill and removes any maintenance or damage concerns of a hanging derailleur, though at least such giant wheels would keep a derailleur fairly high off the ground.

Just in case you’re still having trouble wrapping your head around what 36″ wheels look like compared to typical bicycle wheels, here’s a better idea of the scale.

That electric drivetrain helps the bike reach 20 mph (32 km/h) on pedal assist, maintaining the e-bike’s Class 1 status and ability to ride just about anywhere bicycles are allowed. And with the 500Wh battery, DirtySixer says the e-bike should get up to 60 miles (96 km) of range per charge in low-power mode. That Shimano mid-drive motor is capable of higher-power operation as well, though riders might not make it the entire 60 miles when pulling more watts.

Those giant 36″ wheels will roll on carbon Nextie rims, and the aluminum frame will feature custom dual crowns for the inverted 80mm suspension fork on the mountain bike version of the eDirtySixer. There will also be a street version without a suspension fork.

Both models feature front and rear hydraulic disc brakes with 203 mm rotors, though the front wheel gets a pair of those rotors. Ironically, 203 mm disc rotors are some of the largest available on the market, and yet they look like cute little 160s on those massive 36-inch wheels.

The mountain bike version of the eDirtySixer will weigh 65 lb. (29 kg), while the road version will weigh just under 60 lb. (27 kg) thanks to its rigid fork and single-speed setup. For such a large bike, that’s a surprisingly low weight.

While the current prototype uses Shimano’s electric bike drive unit, Folch says that he will also be testing motors from Bosch and Valeo as other potential suppliers for the massive e-bikes’ drive systems.

As far as a timeline, we’re likely still around one year out from the eDirtySixer being released to the public. When it does become ready in mid-2023, it will carry a tall price to match its tall wheels: something in the neighborhood of US $8,000.

There are definitely some high-end components in the bike (that rear hub is a $1,000+ part by itself), though you’re also paying for specialty manufacturing and a unique design. And considering the company’s pedal bikes already start at $5K, you’re getting off relatively easy.

But don’t worry, those NBA contracts should cover it.

Speaking of, if you want to see one of DirtySixer’s other bikes in action, check out Shaq riding his in a credit card commercial below.