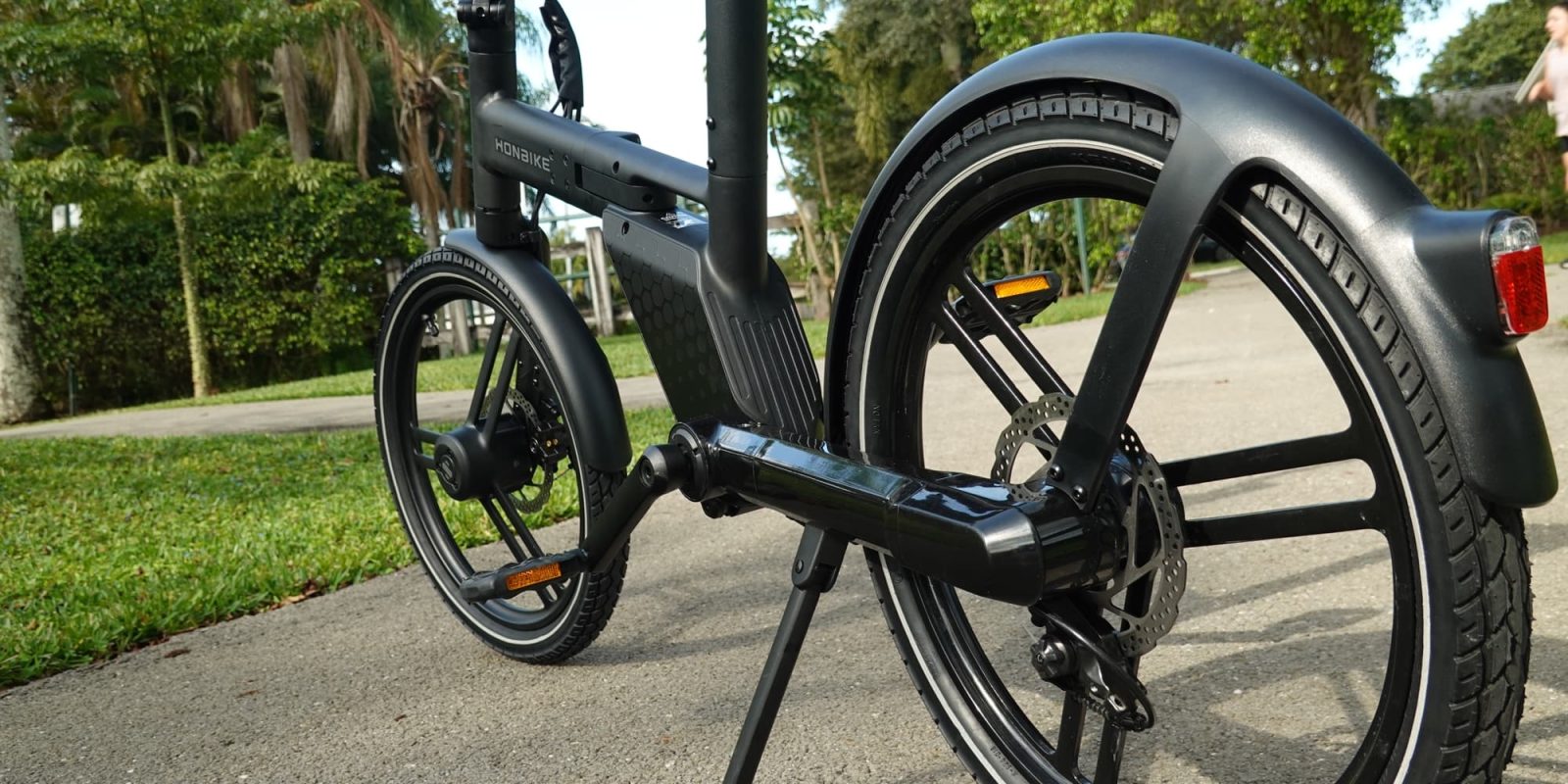 The multiple award-winning Honbike is just about as steep of a departure from typical electric bicycles as I can find. Having tested hundreds of different e-bikes, the Honbike is unique in so many different ways that it marks a refreshing new entry to the market. Now launching on Indiegogo, we got to test out the revolutionary new driveshaft e-bike ahead of time to let you know if it’s worth a second look.

Spoiler alert: It definitely is, *if* you’re a city dweller.

While there’s a lot to take in on the Honbike, the single biggest technical difference between it and all the other e-bikes out there is the driveshaft transmission.

There’s no chain or belt-drive on this one – just a spinning shaft sealed away inside a protective case.

They say it will keep you rolling maintenance free for 40,000 km (25,000 miles), which is probably longer than anyone will actually own the thing. Assuming a 10-mile commute five days a week, that’s 10 years of riding.

But this is more than just a driveshaft e-bike. Check out all the awesome features that make this e-bike unique in my test riding video below. Then read on for my full thoughts on the Honbike.

The Honbike comes from a Japanese design that won several international awards and has now been reworked for a European and North American audience.

In fact, the Japanese model was so successful that some companies apparently jacked the design to rebadge it internationally, trying to beat Honbike to the punch.

The motor power has been increased from the 200W Japanese version to the EU limit of 250W (there’s no higher power version for the US market).

It also received a few other upgrades, like a triple sensor for the pedal assist (more on that in a moment), increased height in the seat tube for taller Westerners, and foldable pedals with a new folding stand.

Lots of tech in a little e-bike

The little Honbike is surprisingly tech-savy.

That triple sensor pedal assist I mentioned makes the e-bike extra responsive. There’s not only a cadence sensor to measure pedal speed and a torque sensor to measure how hard the rider is pedaling, but there’s also a gyroscope sensor. That gyro is used to measure the hill incline and apply extra power when attacking a hill. It’s something we’ve only seen in high-end electric bikes before, and even then it’s not very common.

More than just the electronics though, the e-bike features an innovative design.

The wheels are single-side supported, which is part of what gives it that unique look. The front wheel gets a “righty” fork, while the rear wheel is supported on the left side. There’s no suspension, but this is very much an urban e-bike, so suspension wasn’t necessarily a requirement.

The lack of suspension helps keep the bike fairly lightweight, at just 20 kg or 44 lb. Compared to many folding e-bikes, that’s a solid 25-50% lighter than we’re used to seeing.

Then there are all the unique components on the bike. Check out that saddle. I have no idea why they needed to reinvent the saddle, but it looks pretty awesome, in a funny/quirky way. I thought it would feel weird, but to be honest it feels fine. There’s no nub between your thighs, which will likely feel nicer for some people. It’s more like sitting on a stool. Sure, it takes a day or two to get used to, but then it just feels fairly normal.

The brake levers are also novel and take a bit of getting used to. They have their fulcrum on the opposite side, meaning the longer part of the throw is more towards the center of the bars. Since I like to do one or two-finger braking, that actually works pretty well.

Performance is decent, nothing revolutionary

The real winner on the Honbike is the design and folding, not the performance. The performance is fine, but nothing more than a typical folding e-bike with European-level specs.

The speed tops out at 15.5 mph, which is the 25 km/h EU standard. It’d be nice to have a US version that went faster to 20 mph, but maybe that will come in the future. As it stands, 15.5 mph isn’t bad for city riding, especially when you’ve got a nice bike lane or trail. If you’re trying to share the lane with traffic and keep up with cars, 15.5 mph feels mighty slow.

The driveshaft means it is a single-speed, and I have to imagine that the 20 mph speed would have your legs spinning pretty fast.

The range is also mediocre due to the small battery. The 216 Wh battery is tiny, which is nice when you want to carry it in your bag without taking up much space. But if you use the highest power level, it will drain quickly. You can get the advertised 40 km (25 miles) range if you stick to the lowest pedal assist level, but most people will find themselves somewhere in the middle, which means you can’t ride quite as far.

Again though, this is an urban e-bike. Most people aren’t riding more than 10 miles in the city, so the Honbike certainly has more than enough capacity for that. A bigger battery would mean better long-range cruises for leisure or recreational riding, but I just can’t see anyone getting this specific e-bike for that use. There are too many other recreational e-bikes out there.

So for the type of riding it is designed for, the Honbike makes a lot of sense. It has city specs to get you through your commute with ease, plus the zero-maintenance drivetrain. The included fenders, bell, and other commuter niceties also increase the utility for city riders.

But the real winner here is the price, at least with the Indiegogo pre-sales. While the Honbike’s MSRP of US $2,399 feels a bit high, there’s a $1,100 discount if you pre-order on Indiegogo. At $1,299, that’s a much better deal! There’s an extra US $100 shipping fee (or €100 fee in the EU), but that’s still a nice deal for a unique and innovative electric folding bike, if that’s what you’re after.

I already know there will be people in my comment section saying “why don’t you get a faster e-bike for less money?!” but that’s kind of missing the point.

No one is claiming that Honbike offers the best $/watt ratio here.

That’s the beauty of having such a diverse e-bike market. If you want something unique, lightweight, easy to fold, and easy to use, the Honbike does it for a song. If you want to hit 30 mph or ramp over pot holes with fat tires, then you’ll need to look elsewhere.