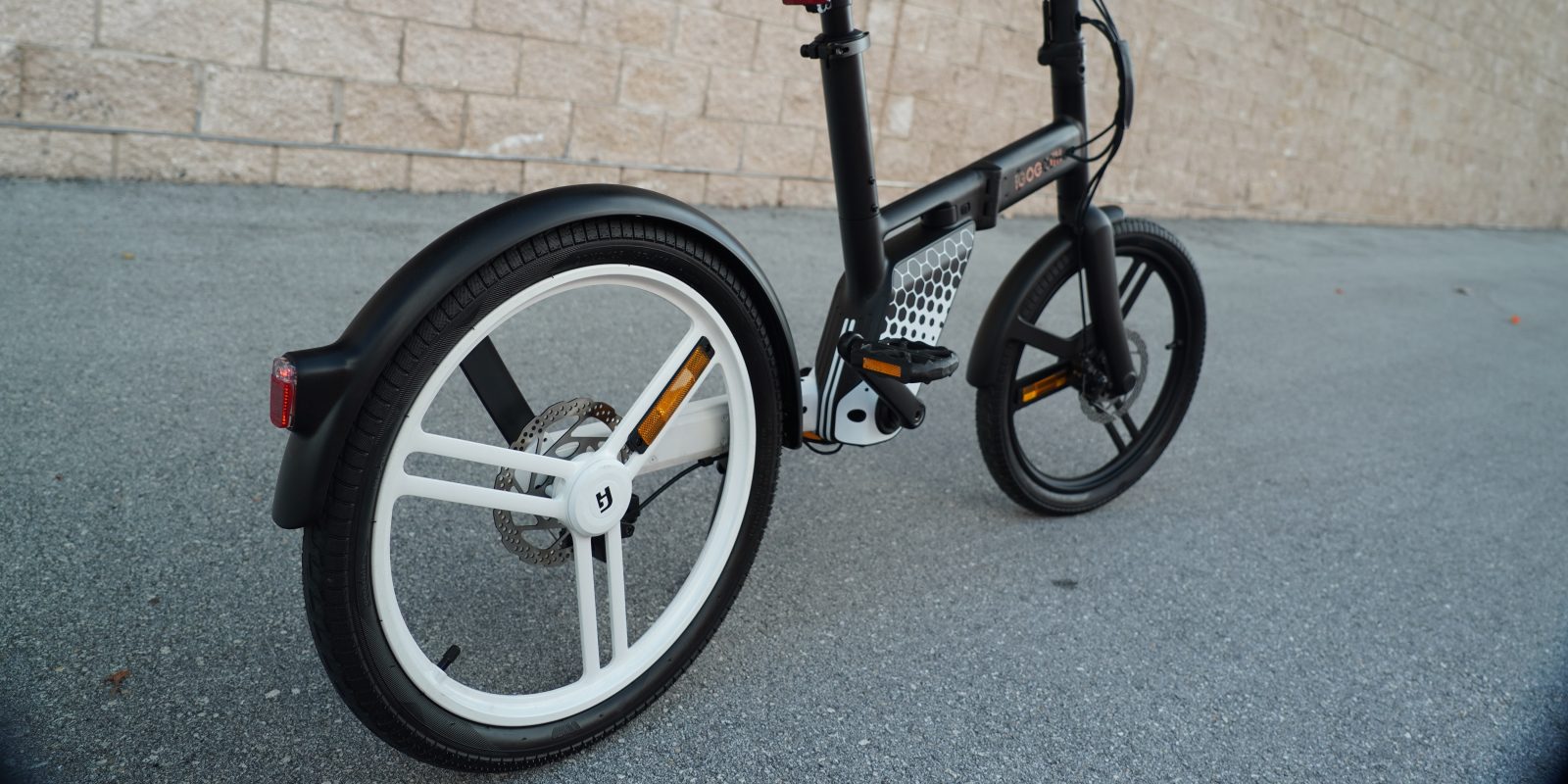 As much as I love electric bicycles, I have to admit that we rarely see anything revolutionary anymore. The last few years of e-bike advancements have largely been incremental. Important, but nothing groundbreaking. However, one look at the Igogomi e-bike had my inner child buzzing with excitement – finally something new!

As you can probably tell, the Igogomi doesn’t look like most other electric bicycles, or even pedal bicycles for that matter.

Not only are the wheels single supported.

Not only do the brake levers bend the opposite way.

Not only does it use a driveshaft in lieu of a chain or belt.

But it’s just totally different. And different sounds like fun to me!

Take a gander at my brief video review below before you continue reading for my full thoughts.

A folding e-bike with some major differences

The Igogomi folding e-bike does one thing and it does it well: It stands out.

It’s not the fastest or the most powerful e-bike out there. But it’s got an awesome design that’s attributed partly to its innovative drivetrain and partly to the designers just saying “screw it” and building it however they wanted.

Single-supported wheels aren’t new; the GoCycle bikes we’ve reviewed also have them. But the Igogomi manages to somehow wrap theirs in fenders that provide both utility and a stylish look.

Next, check out those brake levers. They take a couple minutes to get used to since they have their fulcrum on the opposite end of the lever compared to typical bicycle brakes, but they’re pretty sweet looking. They also double as hand guards, not that you’d be ripping around on trails where that would be an issue.

The brakes are just simple mechanical disc brakes, so it’s not like these are anything fancy on the inside. But on the outside, they look pretty darn cool!

They also maintain a neat, minimalist style on the handlebars. There’s no protruding screen to ruin the lines, as the display is mounted flush with the top of the bars on the stem. Even the bell is barely noticeable. It’s all nicely integrated to give a purposeful look – not like a bunch of parts from a catalog got bolted together at the assembly plant.

There’s also this cool light bar that runs across the front of the handlebars and makes for a great daytime running light. There’s also a headlight for added visibility, but two lights are better than one, right?

Then lastly we have the belle of the ball: the shaft drive rear. A narrow driveshaft is hidden away in the sealed rear chainstay (do you call it a chainstay if there isn’t a chain anymore?) and directly connects the rear hub to the pedals. No gears, no transmission, just a direct drive.

There’s a serious downside to that – this is a single-speed e-bike. But the upside is you get this cool, entirely enclosed drivetrain. It’s a no muss, no fuss solution.

There will be people that claim that driveshafts are less efficient. And they’re probably right, by a few percentage points. But this is a bicycle. And an electric one at that. We aren’t splitting hairs here.

I tested this e-bike in Florida, which isn’t known for its hills. The highest elevation is usually the closest lifeguard stand. If you live in a hilly area then this might not be the best bike for you. But in a relatively flat city, this e-bike works great as a single speed.

The motor only tops out at 15 mph (25 km/h) and so it’s not like your legs will be spinning like an egg beater anyways. But if you do happen to encounter some hills, there are five levels of pedal assist and the most powerful level does offer some good boost. Just don’t try and climb a mountain with this e-bike, it won’t handle it.

The bike also has some interesting tech hidden away in it. Like, it can sense when the bike tips over by more than 10 degrees and will instantly cut power. That way, if you fall over, the bike doesn’t try to make a break for it. I’ve never felt like that was a feature I was previously missing, but they give it to you anyways, so there you go.

There’s also a cute little removable battery. It’s tiny, which is a good thing and a bad thing. The good news is you can easily take it out and carry it inside to charge. Guys might even be able to fit it in their pants’ pockets (sorry ladies, don’t blame me – blame fashion for cursing you with small, non-utility pockets). The bad news is it is very low capacity – to the tune of 230 Wh. They say that’s good for 25 miles but only in the lowest pedal assist setting.

Still, this isn’t a high-power e-bike, and so the battery does actually last longer than you’d expect since it doesn’t have to provide a lot of power at once.

The good and the bad

So let’s break it down, because there are some interesting things that I really like about this e-bike, but there are also some downsides.

On the upside, it’s a cool design with a neat look, it’s fairly lightweight (just 44 lb. compared to many 60+ lb. folding e-bikes), it folds into a small package, and it’s got some interesting advantages like the fully enclosed drivetrain.

On the other hand, it has a fairly small battery, isn’t powerful enough for big hills, and only has a single gear ratio.

For the current price of $1,799, you’ll have to decide if the novelty and fun design is worth it enough for the lower performance. At this price, if all you care about is performance, then there are better buys out there. But if you want something unique and that works well, even if you have to pay a bit more for it, then this is one to keep on your list.