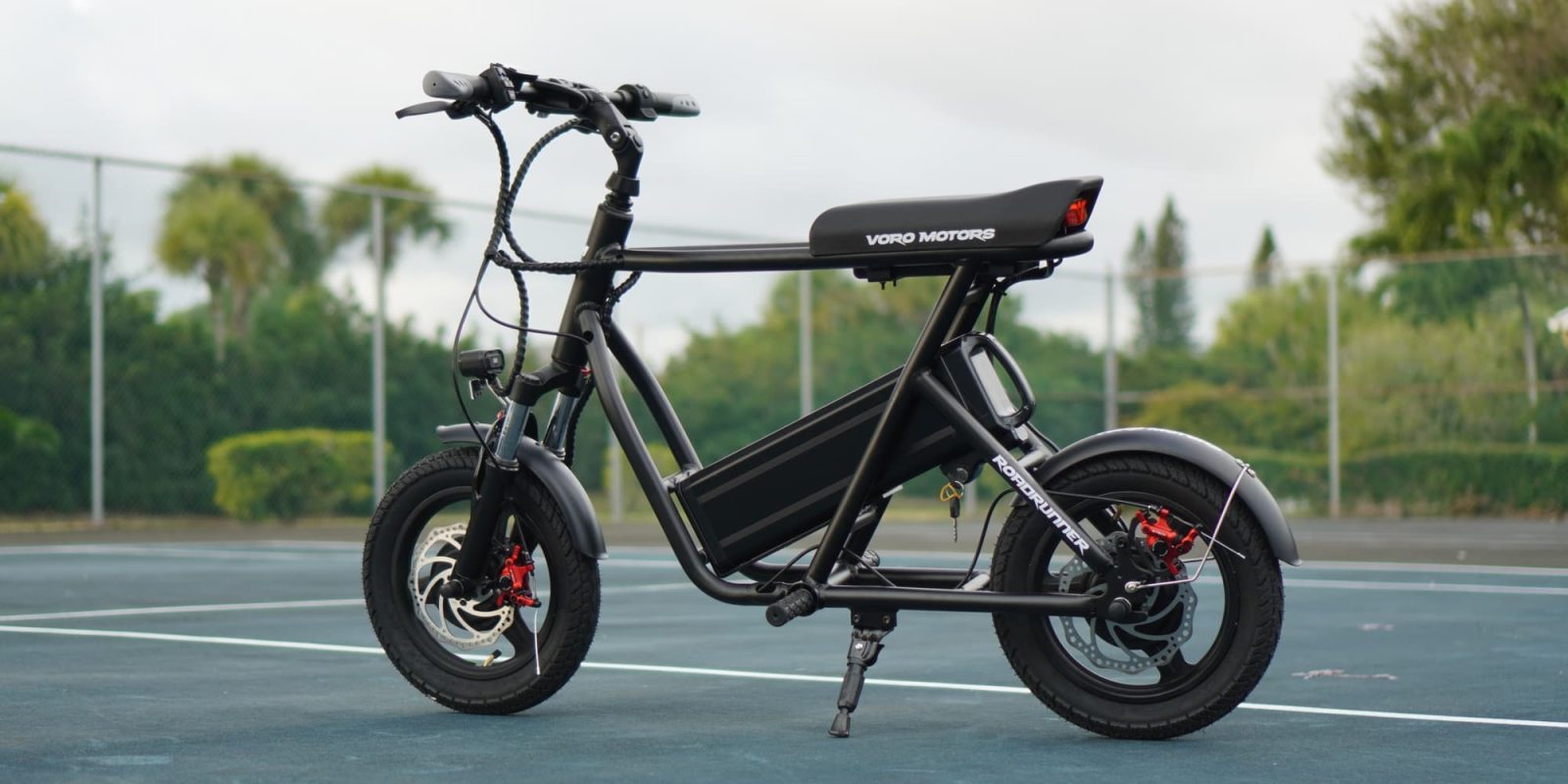 The EMOVE Roadrunner from Voromotors seems like what an engineer would design for a seated electric scooter if they didn’t have to follow any rules. It’s basically two wheels strapped to a battery, and it goes faster than it probably should. It’s small. It’s powerful. It’s probably dangerous in the wrong hands.

In other words, it’s perfect.

In the same way any operator should exercise caution when wrapping their fingers around a steering wheel or mounting a motorcycle, so too should you be careful when deep squatting down onto this funny little seated electric scooter.

But since the unassuming little Roadrunner hides much more power and speed than it would appear, this is definitely not an electric scooter to take lightly.

I promise, you’re going to want to see this thing in action in my video review below before continuing on for my full written thoughts.

The Roadrunner probably shouldn’t exist, but I’m glad it does. It’s just such an odd product category.

That leaves it as this hard-to-categorize little pocket rocket that doesn’t care what you call it, it just wants to go!

There are three speed settings, and you may actually use all of them. Most scooters are left in their top speed setting all the time, since who wants to ride around at 8 mph in slowpoke mode? But the Roadrunner actually gets up to higher speeds in settings 1 and 2. For the fastest riding though, level 3 is where the party starts.

That would be fast for any e-bike, but it feels especially fast for a small seated scooter with 14″ wheels.

Between the front suspension and cushy saddle, the ride actually feels decent at full speed. I wouldn’t want to hit any self-respecting pot hole, but smooth roads gave me zero pause about riding this contraption full out.

This exact scooter has been modded to go around 50% faster, so don’t go thinking it can’t handle its stock 34 mph speed.

With a 48V battery underneath, it has plenty of power between the dual motors to accelerate quickly and get you rolling fast.

We almost never see a battery this large. A 48V and 26.1Ah pack is industry leading, or at least I think it will be, if I can just figure out what industry the Roadrunner fits into.

Regardless, that’s a lot of battery capacity. They say you’ll get 50 miles (80 km) of range from the thing, or as they cheekily put it, “100 miles with a battery swap.” Since the battery is removable, they’re gently suggesting you buy a second one so you can double your range.

I’m here to tell you that you probably won’t need the second battery, as the first is so gigantic that it will likely give you everything you need.

But if you want the best range out there in the wildly fast-seated-electric-scooter category, then by all means, grab a second battery.

When it comes to braking, Voromotors made the wise decision to outfit the EMOVE Roadrunner with hydraulic brakes. You don’t want to try and stop 14″ wheels from 35 mph without some extra power. The brakes are technically hybrid hydraulic brakes, meaning there’s a mechanical pull from the bars and then a hydraulic piston down at the brake caliper.

I’d have preferred to see hydraulic lines run all the way up to hydraulic levers at the bars, but this definitely gets the job done. Braking is quick and confident, just like I’d want to see on this little bad-decision-machine.

Speaking of the bars, there’s also a cool folding feature that lets them fold in to make the scooter even more narrow.

For such a little vehicle, being able to fold the bars in and slide it closer against a wall is a nice feature to have.

There’s a lot to like here. A nice comfy seat. Big battery. Hydraulic disc brakes. Dual motors. Suspension. LED light package. The dang thing even comes with turn signals. They’re not very far apart so I’m not sure they’ll be readily recognized as turn signals, but it can’t hurt!

The only real downside I can see here is that it’s not going to fit some big and tall riders as easily as shorter riders. Well, big riders might be fine. It’s rated for up to 150 kg (330 lb). But tall riders might find it a bit of a squeeze. You can scoot farther back on the scooter’s seat to stretch your legs a bit more, but there’s a limit.

I’m 5’7″ (170 cm) and I felt great on it. My nearly 6′ (182 cm) brother looked a bit sillier on it, but it seemed to ride just fine for him. Much taller than that and I’m afraid you’ll be a bear on a circus tricycle, though that doesn’t mean you can’t make it work. That bear rocks that thing!

Is it worth it?

So here’s the bottom line. The EMOVE Roadrunner is priced at $1,695. That’s definitely more than most cheaper seated electric scooters, but it also has much more power, speed, and range.

So for the price, you’re getting a lot here. The performance is undeniable, and the utility is great too. While it lacks storage space, the thing is nice and compact to hideaway in your apartment or office. It doesn’t have the bulk of an e-bike (or the speed restriction), though it does look a bit wacky.

If you don’t mind the funny look (or even prefer it), then I think the Roadrunner is absolutely worth the price. It’s fast, fun, powerful, and simply a blast to ride.