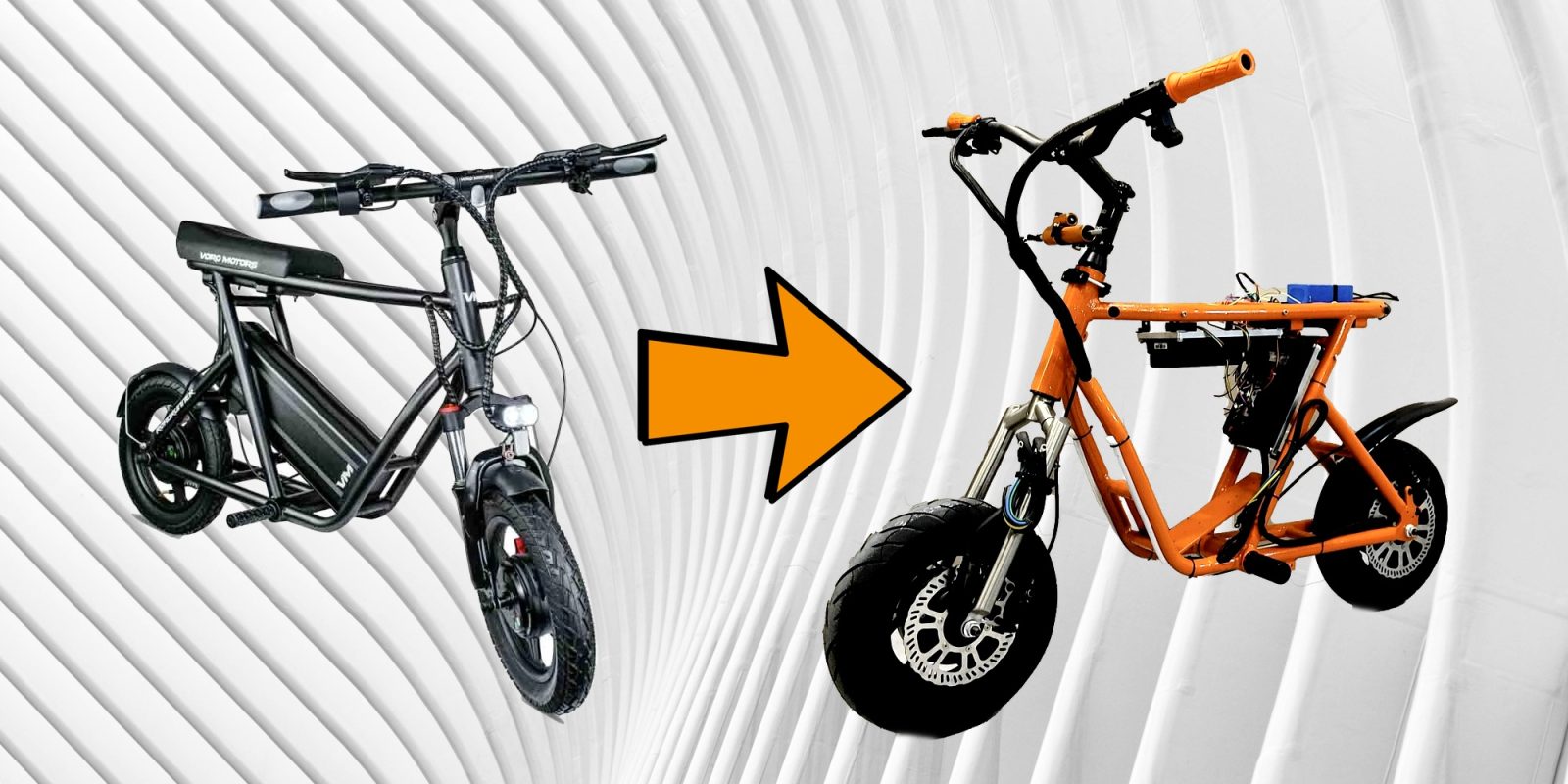 California-based Voro Motors provides some of the most powerful electric scooters on the market, some of which can even reach highway speeds in their unlocked modes. Now we’re getting an early glimpse at a custom-modified scooter that combines two of the brand’s models into one high-power Franken-scooter.

The scooter is built on an EMove RoadRunner chassis.

Late last year we covered the launch of that scooter, which is a riot by itself.

And that’s no exaggeration, I’m currently testing one and have actually hit that speed on it (full review coming soon!).

But the smaller motors in the RoadRunner apparently weren’t excessive enough for the team behind this one-off scooter, as they decided to up the ante with parts from Voro’s Wolf King GT electric scooter.

The Wolf King GT is near the top of the list when it comes to extreme electric scooters. The $3,695 scooter features long travel suspension, tall ride height, and a pair of 2,000W-rated electric motors that propel it up to 62 mph (100 km/h).

As usual with high-speed electric rideables, the rated power doesn’t tell the full story. With a pair of 50A sine-wave controllers running at 72V, each motor can theoretically pull a peak of 3,600W.

That’s already a bit crazy on a standing electric scooter (and is of course designed for off-road riding, which is what the Wolf King GT excels at), but the crazy meter ratchets up a few more notches when those parts are shoehorned into the little RoadRunner’s frame.

With the pair of overpowered motors bolted on, the previously peppy RoadRunner now looks like an orange rocket fresh out of a mad scientist’s scooter laboratory.

They refer to it as a 5,000W scooter, but that’s actually likely a bit low based on the peak performance of those motors.

The inclusion of what appears to be a steering damper as well as frame lights from the donor scooter should make the modded RoadRunner a bit safer, though “safe” is a relative term at these power levels.

The company hasn’t released too much more info about the mod yet, but it may actually be available for purchase eventually.

The project was created in part to showcase how riders can use Voro Motor’s wide selection of electric scooter replacement parts to customize and modify their personal electric vehicles. But the company may end up doing something similar with its own unique creations.

All parts and components are now available on our website – Riders feel free to customize your scooter based on the specifications you desire! VM will soon be releasing 1 of 1 edition each month on our website, fully customized ready to ship electric scooter on our website, stay tuned for that!

As I mentioned, I’m currently testing out the RoadRunner in its stock configuration. That used to seem like overkill, but now it suddenly feels a bit more sane after seeing this custom-modified version.

I’ll be excited to get my full review of the RoadRunner prepared soon, but in the meantime you can check it out in a quick look below.