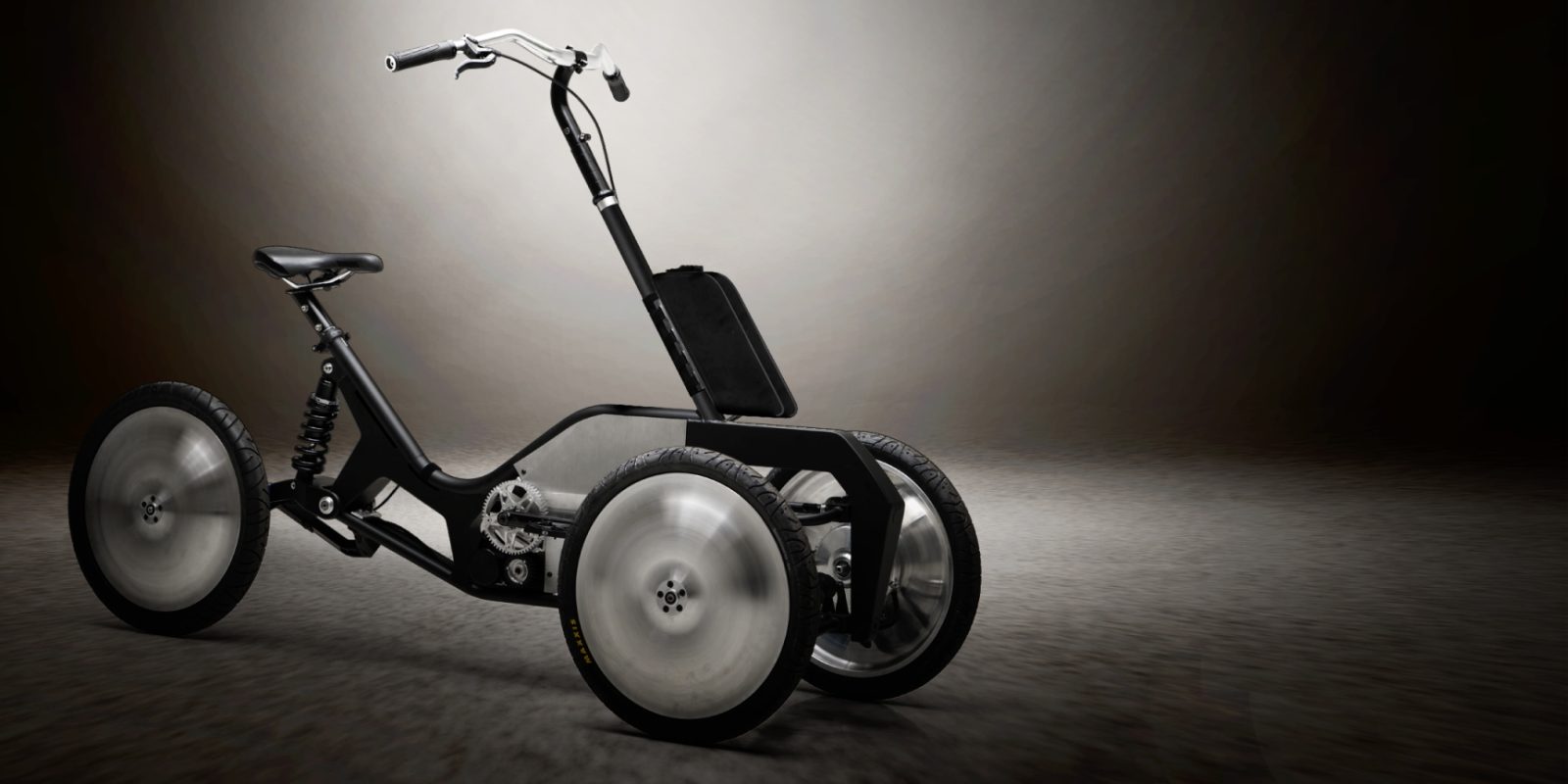 Oregon-based Arcimoto unveiled today a radical new full-suspension, three-wheeled electric bike known as the Mean Lean Machine (MLM). The new e-bike employs tilting technology to help it corner more like a two-wheeler while maintaining the stability of a three-wheeler.

Yeah, yeah I know. There’s a word for a three-wheeled bicycle. It’s “tricycle.” But this ain’t your niece’s tricycle, folks.

Leave it to the maker of 75 mph (120 km/h) three-wheeled electric vehicles to develop one of the most highly engineered electric bikes we’ve seen in just about… ever.

Think of it like a mini Arcimoto FUV, except that it tilts into turns. And it has pedals. And a generator for drive by wire. And it’s all-wheel-drive. And the footprint is more in line with e-bikes.

Okay, so it’s not really that much like an FUV, but you get the point.

The Mean Lean Machine reflects Arcimoto’s commitment to push the envelope of sustainable mobility. We started with the amazing three-wheel tilting technology developed by our Tilting Motor Works division and then packed the MLM with new cutting-edge electric vehicle features, including hub motors on all three corners and a pedal generator, in order to deliver a joyful experience unlike any other in the e-bike category.

There are a number of fascinating things going on here with the MLM.

First of all, you’re looking at an all-wheel-drive vehicle. There’s a hub motor in each wheel, meaning it should have pretty impressive handling and traction. Plus, based on the sophisticated STAFL VCU1200 controller module I spied in the prototype’s debut video, it’s likely smart enough to engage traction control with those three motors.

Next, despite it having a pedal interface like a bicycle or e-bike, there’s no mechanical connection between the pedals and the wheels. It’s all drive-by-wire. And there appears to be a stationary fitness bike mode, where the MLM stays parked and the rider uses it like a three-wheeled Peloton to get in a workout while charging up its main drive battery. We’ve seen pedal generators on e-trikes before, and we’ve also seen e-bikes that can recharge themselves when used on a trainer and engaging their regenerative braking. But we’ve never seen anything like what Arcimoto has done here.

Next, there’s of course the leaning aspect of the MLM. Three-wheeled e-trikes are more stable than two-wheeled e-bikes since they have the inherent stability of three contact points on the ground. It’s the same reason you don’t see two-legged stools.

The only problem is that when cornering hard, static three-wheelers tend to want to throw the rider off the bike or flip over. Usually both.

But leaning trikes are different. They combine the stability of a three-wheeler with the intuitive cornering of a two-wheeler.

It’s a complicated setup that requires sophisticated suspension to function effectively, but judging from the prototype’s performance in the launch video below, Arcimoto appears to have nailed it.

It’s a thrill to unveil the Mean Lean Machine, a radically new high-performance e-bike with three-wheeled stability and an awesome ride. With the MLM, you’ll be able to corner the same way you would on a regular bike with greater traction, more stability and better braking ability.

There’s still a lot we don’t know yet about the Arcimoto MLM.

According to the company, “specifications, range options, pricing, features, and accessories will be unveiled later this year.” So that’s pretty much, well, everything we want to know.

The only other detail we have is that you can go ahead and plop down $100 to reserve yours for an expected Q4 2022 delivery.

It’s fully refundable, which is good since we don’t know if the price will be $200 or $20,000. But I’m wagering a wild guess that it will fall somewhere between those two ends of the spectrum.

This is a lot to take in.

The MLM’s impending commercial success or failure will come down to the yet-undisclosed pricing, but let’s put that aside for a minute and talk about the tech.

From an engineering standpoint, it’s pretty amazing. And it begs the question, Why buy a normal e-bike when you can buy one that looks more fun, has all-wheel-drive, can’t fall over and – oh yeah – is also a Peloton?

Getting leaning three-wheelers right is a tricky science. But with Arcimoto’s acquisition of Tilting Motor Works last year, they bought their way into the best that the industry has to offer. And from the video, it looks like it works incredibly well.

So as a science project, the MLM looks amazing. Well done, Arcimoto.

But now comes the real task: Can they sell it? And that will come down to the specs and pricing, which we just don’t know yet.

I imagine the specs will be comparable to most e-bikes these days. If it can’t do 20 mph (32 km/h), it’s dead in the water. If it can do 28 mph (45 km/h), it will be a hit. Even faster would be a sure winner, but then that could put it afoul of e-bike laws, requiring riders to obtain a moped or motorcycle license. So 28 mph is probably going to be the limit.

But then comes the pricing. It won’t be cheap (this is Arcimoto that we’re talking about here), but that shouldn’t surprise anyone. Not only is it a sophisticated and new product, but it will be built locally at Arcimoto’s facility in Oregon. You can’t get “American manufacturing” and “cheap price” in the same sentence. And the ironic thing is that all those blustering “build it in ‘Murica!” red state folks will be the first ones to complain about how much it costs when Arcimoto eventually reveals the price.

As an electric bike and motorcycle journalist by day (and by night, them’s the hours), it’s not every day I get to dust off my expensive engineering degree or my MBA. But this new project has me giddy on both fronts, and I can’t wait to get more information so we can fire up more analysis of what’s to come from Arcimoto.

Now let’s hear your thoughts on the upcoming MLM tilting e-trike in the comments section below. And while we wait for more news out of Eugene, Oregon, feel free to watch my very own test ride of Arcimoto’s awesome 75 mph (120 km/h) Fun Utility Vehicle and Roadster in the video below.