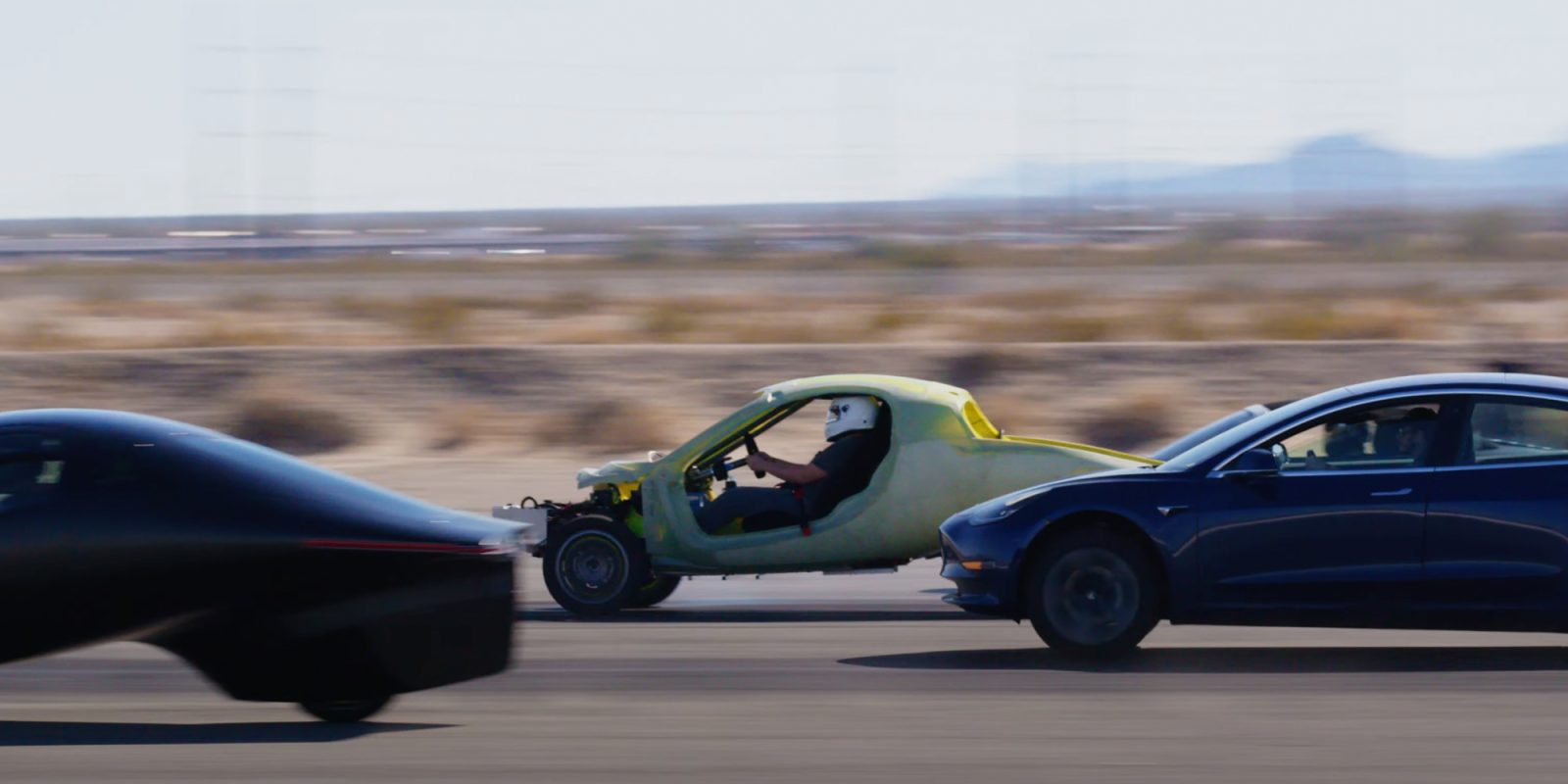 Solar EV startup Aptera Motors posted a video that puts the beta version of its upcoming SEV against an alpha version, a Tesla Model 3, and an Audi R8 GT Spyder in a desert drag race. While it’s a very close race (for the Audi at least), the Aptera appears to just barely edge out the competition in a quarter-mile sprint.

Aptera Motors is a San Diego-based startup that specializes in solar electric vehicles (SEVs). As the second iteration of the Aptera name, the company is continuously working to bring its flagship SEV donning the same nomenclature to market, updating the public every step of the way.

It has paid off so far too. After unveiling the Aptera SEV in late 2020, the company has gained a growing list of fans and reservation holders, many of whom claim both roles.

Since its initial debut, the public has seen three different alpha versions of the Aptera complete with black, white, and metallic silver exteriors. Since announcing its entry into the beta phase, the company is been gearing up a move to a new 80,000 sq. foot facility slightly north in Carlsbad, California where the upcoming SEVs will be built.

In late January, the startup shared test track footage of the beta version SEV alongside word that Aptera production and deliveries were still on track to begin later this year. Some delivery windows have since been pushed, but Aptera has reiterated it remains on schedule for the start of production.

To further wet the beaks of those Aptera enthusiasts out there (we see you), the SEV automaker has shared its latest beta track footage, and this time it’s a drag race. That’s right, it’s Aptera versus Tesla, versus Audi.

Aptera Motors recently shared its latest YouTube video, titled “drag race” which features a four-vehicle drag race complete with a photo finish. Contestants include: An Aptera Noir (alpha version), a Tesla Model 3, an Aptera beta, and an Audi R8 which appears to be the GT Spyder judging by its rear.

Let’s nip this in the bud before any Audi or Tesla diehards light the fuses of their comment cannons. Aptera provides zero details of the Tesla and Audi vehicles it is going up against. Judging by the chrome on the Model 3, it’s a model between 2017 and the 2020 refresh and might be a standard range with bricks in the trunk for all we know.

The Audi is definitely an R8 because… first of all, it says it on the vanity plate, but it also has a unique back end that, despite the long quick shots, seems to relay it as a GT Spyder. If that is true, that would give the vehicle a 5.2 liter V10 engine (it just feels wrong typing those words on this site).

Regardless of the exact trims we are looking at, the video footage tells us viewers Aptera means business with its beta SEV, followed by a desert dust chaser (you can almost hear the Tesla driver coughing it up). We will leave the video for you below to make your own judgment on who gets the checkered flag, but it sure seems like the Aptera beta, no? Have a closer look.

It’s tough to tell because the Audi is black and backlit, creating a longer shadow to decipher, but that Aggro Crag green sure sticks out… and it looks like it’s sticking out further than that R8, doesn’t it?

And imagine how many inches further along the Aptera would have been with its signature low drag frame on. A fully clothed Aptera is going to win any coefficient of drag race (sorry).

Sure, this story could have a different ending under more controlled conditions complete with a Christmas tree and fully-automatic timing, but still… look at the beta go. It’s all for fun, and it’s fun to see. So give it a watch and see for yourself.

If you’re impressed with Aptera, you can still reserve your own for $70 down.