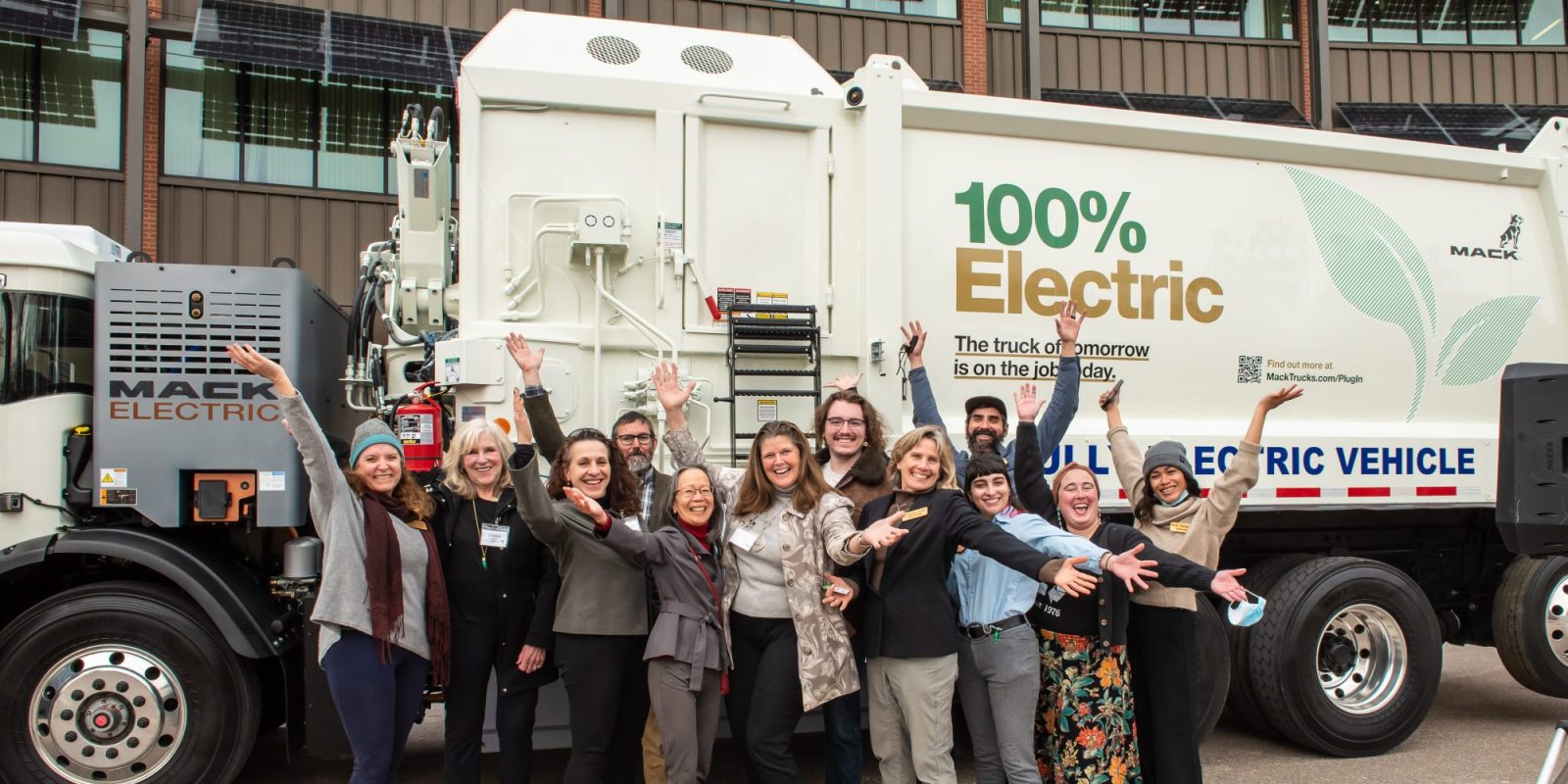 EcoCycle, a nonprofit recycler in Boulder, Colorado, is putting into service the nation’s first commercial electric truck for compostable waste collection. The truck is a Mack LR electric and EcoCycle hopes that it will be first of many adopted by the industry.

EcoCycle is a “zero waste to landfill” organization that has offered curbside recycling in Boulder for 46 years, one of the first communities in the nation to do so. Their new electric Mack truck will be used for their curbside composting program, joining EcoCycle’s fleet of 13 waste collection trucks.

The Mack LR Electric promises the same usability as their diesel models, but with all the benefits of electric drive. It comes equipped with two motors offering 448 continuous horsepower and 4,051 lb.-ft. of torque from 0 rpm. It has so far been used in trial programs by the New York City Department of Sanitation and Republic Services in North Carolina.

EcoCycle was impressed with what they had heard about these trial programs, and opted for the Mack LR over other offerings due to this extensive testing and Mack’s pedigree.

There are numerous benefits for electric trucks in waste collection. Waste trucks typically have a defined daily route, so energy use is predictable day-to-day, making range of little concern. Trucks typically return to a depot where they can be charged overnight to be ready for the next day – EcoCycle has installed a 75kW charger in their facility for this purpose, though the Mack LR is capable of 150kW charging.

Routes include a lot of stop-and-go and need lots of low-end torque to get a truck up and running when fully loaded, two situations where electric motors shine. Regenerative braking means less energy loss for a truck that needs to stop several times per block.

And of course, they’re much quieter and less smelly, which is great for neighborhoods – especially now that so many are working from home.

These are all great benefits, but of course the price needs to be right. EcoCycle said that the Mack truck was significantly more expensive than their standard diesel trucks, but there will be benefits in lower running costs. They hope that prices will come down as electric trucks become more common.

Over the longer term, given zero-emission trucking’s alignment with their philosophy as a zero-waste organization, and the potential to unlock new business in their environmentally conscious community, EcoCycle is confident that the truck will be a boon for their work. Plus, some of the funding for the truck came from VW’s Dieselgate settlement funds – the first Class 8 electric truck these funds have helped pay for in Colorado (others have been CNG).

For this reason, Colorado Governor Jared Polis attended EcoCycle’s press conference announcing the purchase, as it aligns with his Colorado EV Plan 2020, which aims to electrify transportation in the state. Doing so will help reduce pollution and greenhouse gases, something that’s of particular interest to Boulder given the recent massive wildfires that hit the area just last month after an abnormally dry summer and fall – the type of extreme weather we can expect more of as the climate gets warmer.

Given that transportation is the largest source of emissions in Colorado (and the US as a whole), electrifying heavy vehicles is an important step to reducing pollution. Colorado’s Regional Air Quality Council says that each replaced diesel refuse truck will reduce VOC emissions by 31 lbs., NOx emissions by 1,895 lbs., CO emissions by 132 lb., and GHG emissions by a massive 110,101 lbs. every year.

While this order is just for one truck, it is a first for composting, and EcoCycle is confident and hopeful that this will be the first of many – both for themselves, and with the hope of demonstrating the benefits of electric drive to the industry, in Colorado and further. EcoCycle plans to gradually cycle out their fleet of diesel trucks as they age out, and have been told that other nearby providers are “watching closely” to see how successful their new truck is.