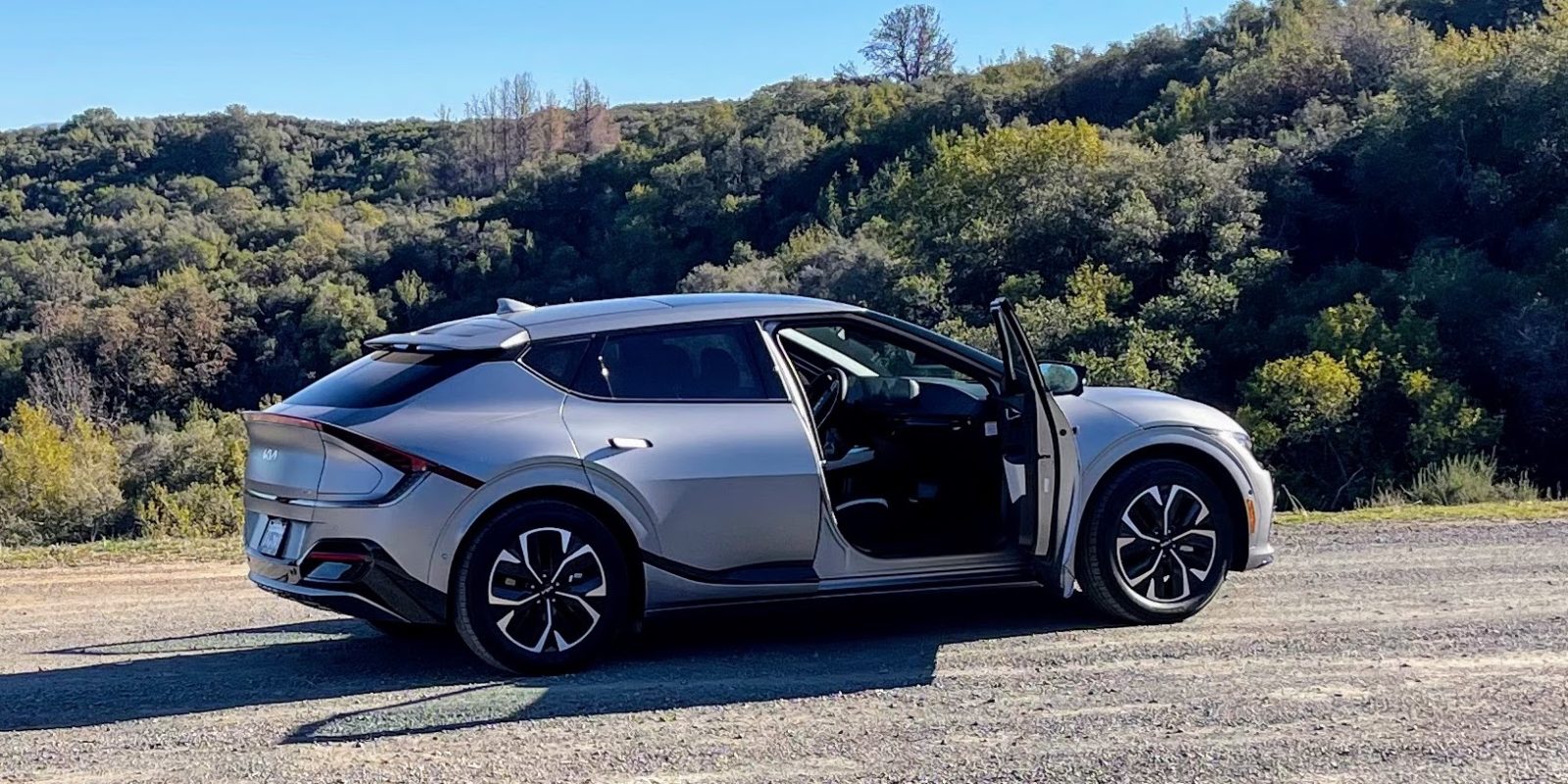 Kia flew us out to wine and “winding road” country to test the new EV6, which is coming a bit late to the US, as it’s been out for a while in its native Korea and Europe already. So that means I’ve had months to digest the information about the car, its characteristics, and its place in the industry. But nothing beats a test drive through the mountains with fellow EV nerd and former Electrek writer Brad Berman to get to know a car intimately.

We’ve known what the EV6 would look like, but in person, it seems a lot larger than the images and video portray. The seats are lifted off the ground and it is quite easy to get into and out of for those with bad backs or knees. There is also plenty of room for 6’5″ adults in the back. That said, it is probably the most sedan-like of the CUVs on the road.

Most of the car’s design is universally liked, if not loved, with the rear being somewhat polarizing. Initially, I didn’t love the backend but after seeing it in person, it definitely grew on me. There’s a certain quirky Citroën vibe to it and I’m here for it. Hidden on the rear passenger side corner is the CCS Combo charge port hidden by a touch-activated door.

From a driving perspective, the front hood is small and much like Tesla’s Model 3/Y, you have great visibility to the ground in front of you without a big front hood in your way. Here, that translates to a small frunk, which we’ll talk more about later, but there is lots of space in the back – much more than a Jaguar i-Pace for instance, which might be the closest analog of the EV6.

Doors are relatively normal in the spectrum of EV weirdness, when you approach the vehicle the door handles present themselves. Otherwise the handles go flat. It is a good compromise between aerodynamics and convenience. There’s even a keyhole behind the handle in case you are Fred Flintstone.

Just like the Hyundai Ioniq 5, the Kia EV6 has two big side-by-side displays, but using them for the first time is a little bit jarring. The left display is filled with graphics that look like a gaming PC when in sport mode (which is likely “most of the time”) and isn’t information rich. It is a little less cluttered in other modes. The center display is a bit better, especially when CarPlay and Android Auto are introduced.

Kia had us use their own mapping software for the trip, and I found it to be harder to follow than Android or iOS options. These UX factors are things that will likely grow on EV6 owners, but hopefully Kia will also do some OTA updates.

One thing I loved is the automatic side cameras when turn signals were invoked as well as surround-view when backing out of a parking space. Also, it is always nice to have CarPlay and Android Auto. But probably the thing as a Tesla driver I like most was the heads-up display. It doesn’t have to be fancy, and Kia’s isn’t, but damn if it doesn’t make driving a whole lot easier.

I am torn on the bottom display/knobs situation, which changes from HVAC to music as you switch on the other displays. I’m going to need more time with this to have the full picture. As with most rides in California, heating and AC weren’t a big factor.

There are a ton of nuances to the EV6’s E-GMP game-changing 800V charging system which can theoretically max out at 250kW. Kia touts going from 10% to 80% or 210-miles charge in 18 minutes, or adding 62 miles of range in 5 minutes. Obviously, that’s under very optimal conditions, but it’s also an amazing new benchmark for the industry.

The Frunk is just a bit bigger than glove box size and looks like an afterthought – like a Pelican case shoved into a motor bay. It is a box with an additional door inside the front bonnet. I think maybe you could squeeze a portable EV Charger or a fix-a-flat kit in here, and for those uses it makes sense. Because you have to open two doors to get in and with its diminutive size, I don’t think people will use this for everyday items, though you could fit a purse or very small backpack in here. Or you could hide a laptop or other valuables in a high-crime area. In the image above, Kia’s charging port plug adapter is shown.

5. If you enjoy sport driving, get the AWD EV6

Kia was nice enough to give us about 90 minutes behind the wheel of both the AWD and RWD models. Our first leg was with the AWD version and, once put into sport mode, we were impressed with the (at least) five second 0-60 acceleration, handling, and performance.

Both cars enjoy low road noise and adequate but slightly soft handling. Cornering feels much better in the AWD version, though that might have been a factor of the bigger wheels. The acceleration and handling in the 77.4/225hp RWD Wind version was lacking, so I imagine the Light version with its smaller 58kWh/167-hp battery is going to be downright slow. I think the sweet spot here is the 320-hp Wind AWD at $50.9K.

Model/Description/MSRP of the five currently available trims below:

7. Kia EV6 big power out through the charge port (V2L)

Kia says that the power out of the charge port is limited to 1.9kW, which is still an impressive amount of power that can charge e-bikes, run campsites with projectors, or even slowly charge another EV. However, the European version of this adapter spits out up to 3.8kW (same amperage but at 220V). I was told that Kia wasn’t aware if this functionality was going to be available in the US, but the hardware was obviously capable.

Kia should really take a second look here. A 3.6kW or higher output is the kind of power that can keep a home powered in the event of a power outage. Ford blew people’s minds when it showed the F-150 powering a home off-grid or a worksite. There is nothing stopping the E-GMP platform from doing similar but at half scale. A 240V to generator plug turns this thing into a $1,000 generator replacement, which many homes are already wired for.

8. Kia Connect and Wi-Fi sharing: To be seen

We didn’t get a proper demo of the Kia Connect system, but it looks pretty impressive with an Apple Watch app being my favorite bit. I look forward to demoing this in a longer time span.

Also, I love that Kia is sharing its Wi-Fi connection (for a price of course). People often ask why use a car’s internet connection when we have a phone on us at all times?

The answer is that car modem and antenna power/hardware are much more robust and can pull in and use a weaker signal at faster connection speeds. We got to see this first hand at one of the stops where neither of our phones could get a signal but the car was still getting robust data.

We were driving on mostly curvy roads, which weren’t a great demo opportunity for the driver-assistance features. Often the turns were too sharp and the car would just start beeping and veer into oncoming traffic.

I’m sure this functions much better on highways, where our very brief encounter was positive. This is a capable traffic-aware cruise control with lane assist. Also, it lets us keep our hands off the wheel for quite some time before beeping, for better or worse. Kia says:

As part of Kia’s overall commitment to safety, the EV6 has a comprehensive list of 21 standard active Advanced Driver Assistance Systems (ADAS)5 including:

I must be crazy to think that all EV drivers just want one-pedal driving. Kia offers five different levels of braking modes activated by the steering wheel paddles. I immediately switched to “I-Pedal” and never looked back

Regen is strong, I’d put it up there with the Chevy Bolt, and can eliminate the use of the traditional friction bakes altogether. You can activate the I-Pedal level regen at any time from the left paddle by holding it down.

For those who like to coast more, especially on long trips, you have the option of choosing zero to four levels of regening. Additionally, Kia will throw in some blended regen when you hit the friction brakes giving even those who prefer traditional two pedal braking some of the benefits of recuperation (like lower brake wear and increased range).

I was overwhelmingly impressed by the E-GMP-based Kia EV6. Features like Vehicle-to-Load (V2L), 800V/18 minute charging, and just being a damn good driving machine make this a big recommendation for people looking for a new EV. It also looks great and has plenty of room.

Kia, a brand not typically known for $50,000 cars, certainly has something special here, and (I can’t believe I’m saying this) the EV6 compares well to the Ford Mustang Mach-E, Tesla Model 3/Y, Jaguar i-Pace, and other cars in this segment. I can’t wait to drive the GT!

Find discounts on the Kia EV6 at a nearby dealer.