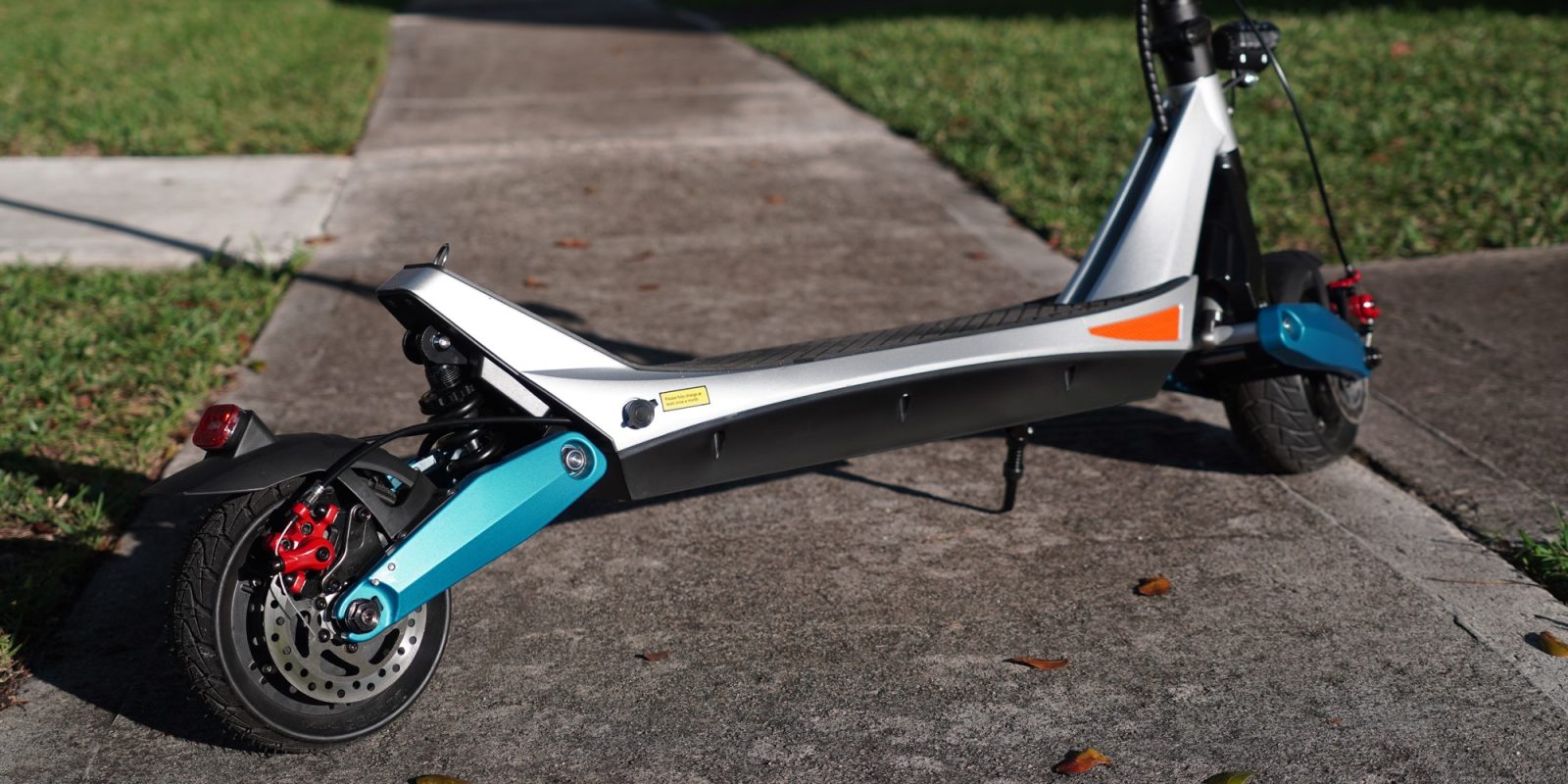 The Varla Pegasus is one of those rare electric scooters that strikes a nice balance between higher-than-average performance and a reasonable price tag. And having spent a couple weeks so far putting the scooter to the test, I can confirm that it has the right combination of performance and value to fit a wide range of riders.

When I look at the electric scooter market lately, it seems like most of the entries fall on one end of the spectrum or the other.

Either it’s a slowpoke city scooter or a death-defying hotrod that flirts with highway speeds.

But the Varla Pegasus seems to nestle itself in the perfect middle ground, offering higher than average speeds and comfy suspension without pushing performance into extreme territory.

It’s a scooter that is absolutely worth seeing in action. And fortunately for you, dear reader, that’s as easy as checking out my review video below. But don’t stop there! Keep scrolling afterward for my detailed write-up on my experience testing out this nicely equipped electric scooter.

Mounting up on a fast electric scooter

If you’re used to a scooter-share model like a Lime or Bird scooter, or perhaps tried your hand at a consumer model like those made by Xiaomi or Ninebot, then the Varla Pegasus is going to feel like quite an upgrade.

The 28 mph (45 km/h) speed is nearly double what those other base-level electric scooters can do.

Dual 500W motors that each peak at 800W of power help the scooter reach those speeds, though to be fair I found that a full 28 mph speed was only possible near the top end of the scooter’s battery charge level. Once the charge drops off, you’ll be hanging around closer to 25 mph (40 km/h). Still, that’s a great speed for fun riding without feeling like you should be suited up in motorcycle protective gear.

Not that you should take safety lightly. A helmet, closed shoes, and clothing more protective than a bathing suit are still a good idea. But this isn’t a 50 mph (80 km/h) scooter that makes me say a short prayer every time I hop on it. It’s a confidence-inspiring scooter that packs in enough speed and power for a fun ride, yet that doesn’t push the envelope too far.

And importantly for any fast scooter, the Varla Pegasus has full-suspension to ensure each wheel offers a smooth ride. Hitting a decent bump at 28 mph can buck you off of a rigid scooter if you aren’t careful. But with the Pegasus, I was ramping speed bumps with reckless abandon.

The scooter feels nicely put together and it never once complained about the abuse I put it through, hopping off of curbs and ramping anything with an angle I could I find.

I also like how the three different power levels make it easy to digitally neuter the scooter when you need to. While I was riding in level 3 most of the time for full power and speed, it’d be easy to drop it into level 1 or 2 when you want to let a friend try your scooter but want to prevent them from pancaking into a wall. Lower power levels also help conserve battery, which is a good idea when you’re running low.

In wet conditions, dropping the power can also help reduce your chance of wheel spin on startup, though it’s generally advisable not to scoot in the rain anyways.

The wide, solid tires definitely give good grip on both paved and off-road surfaces. Some people don’t like solid tires because they don’t offer as much cushion to the ride, but with this much suspension I never felt like that was an issue. And the benefits of never getting a flat tire outweigh the disadvantages here.

In my opinion, the Varla Pegasus is an improvement over weaker commuter scooters in every area. Well, maybe except one: weight. The 66 lb (30 kg) scooter is a beast when you have to pick it up.

The folding mechanism feels solid and the hook is nice and sturdy to keep it folded, but you’re still lugging around some serious dead weight.

If you have to go up several flights of stairs daily, then hopefully you’ve been hitting the gym. At this weight, the scooter is transportable but just barely.

Above 70 lb is usually where I draw the line regarding something I’d want to pickup and carry every day.

One other area I might like to see improved is a bit more take off power. The 500W motors will get you up to speed, but you don’t quite get the same “seat of your pants” feeling that some more powerful scooters give you. Though for new riders, I think that’s probably for the best.

But because the Varla Pegasus is one of those “in between” scooters, it will always be beaten by smaller scooters on portability and by bigger scooters on power. As it stands, the Pegasus offers a nice, comfortable balance between the two, with good power and speed in a scooter that is still both manageable and approachable for leisurely riders.

At a sale price of $1,199, it’s got an “in between” price too. Considering I’ve seen plenty of scooters that cost this much but don’t offer as much power, range, or suspension, I’d say that’s a fair price.

But what do you think? Let’s hear your thoughts on the Varla Pegasus in the comments section below.