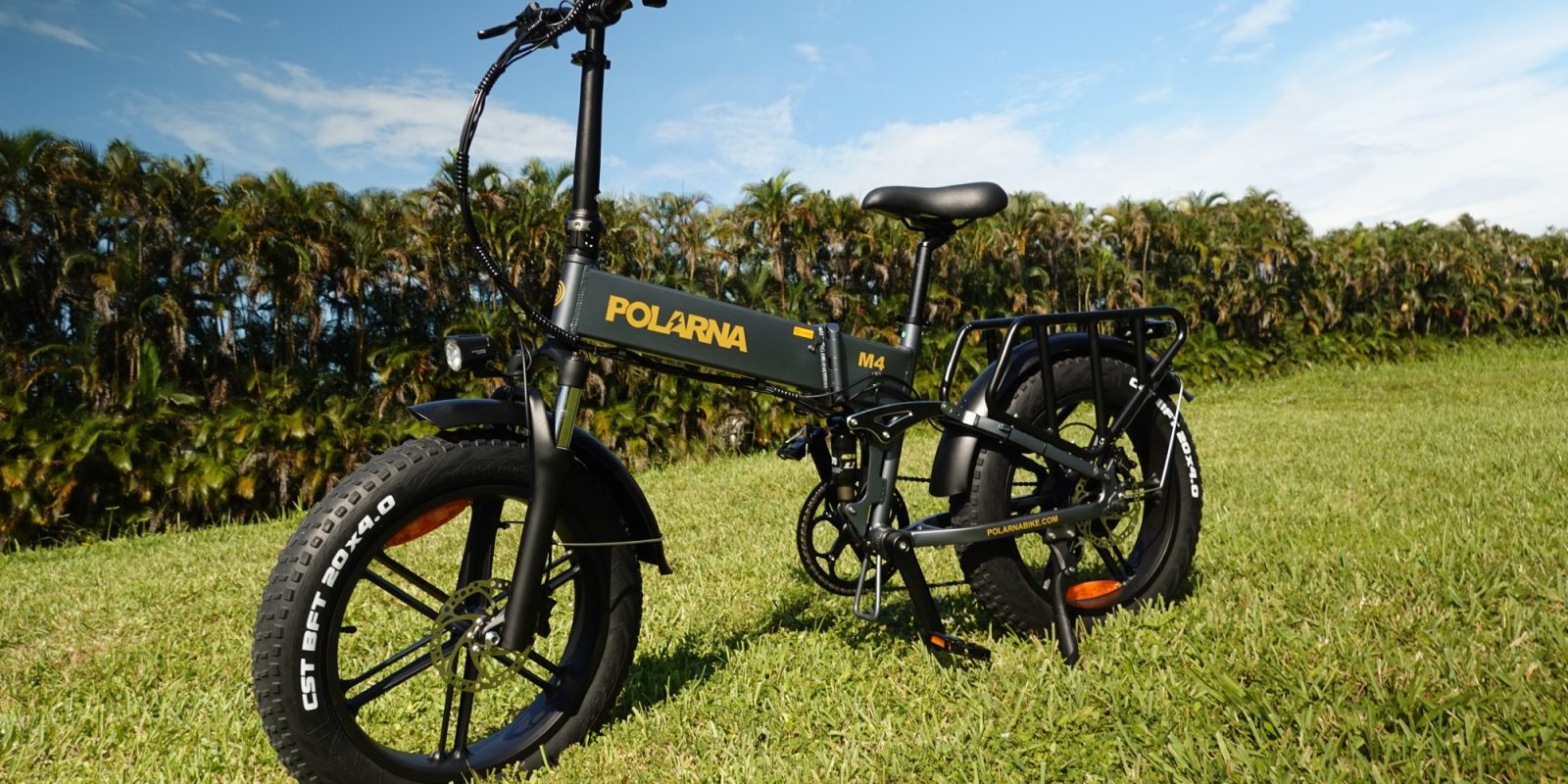 The Polarna M4 electric bike may not look fancy, but it hides away a lot more e-bike than you bargain for. This fast and fun off-roader even folds to make it easier than ever to take a full-suspension fat-tire e-bike anywhere.

We usually see them start well above $2,000 and go up quickly from there.

But at a price of just $1,399, the Polarna M4 brings that full-suspension fatty goodness to the masses at a much more affordable price.

Whether you need a fold-up fat-tire e-bike to drive to a nearby trail network for your rides, or you want to keep an all-terrain e-bike in your RV for adventures at stops, or really any reason that would have you on the hunt for a less-than-gigantic e-bike, the Polarna M4 seems to fit the bill for high-spirited e-bike tomfoolery.

Take a gander at the e-bike in action in my review video below. Then continue on for the rest of my complete review.

The Polarna M4 does exactly what a fat tire e-bike is meant to do: it rides over just about everything.

While larger 26″ wheels are the kings of all-terrain riding, the 20″ tires here still do nearly as good off-road, especially when you keep the pressure down in the 10-12 PSI range. Depending on how soft the ground is, you can even go lower.

When you’re back on the road (and using a bit higher tire pressure), the Polarna M4’s 750W continuous-rated motor uses every watt at its disposal to take you up to nearly 30 mph.

The company claims that it reaches 32 mph, but after de-limiting the bike via the display I was mostly hitting 28 or occasionally 29 while riding on flat ground, with occasional spurts into 30 mph territory. Perhaps they had the help of a tailwind when they quoted it.

The color LCD screen is easy to read both during the day and at night, and it actually looks quite good. I’m so used to monochrome screens that color displays often still catch me off guard. It’s definitely a sharp-looking screen.

The headlight though, goes the other way. As nice and bright as the screen is, the headlight is a bit lackluster. It works, but it doesn’t really light your way that well. It’s a be-seen light and is pretty much only meant to let cars know that you’re there. That’s fine on an e-bike, but for something like this that is meant to travel off-road as well, a brighter light could have been nice.

The real prize here is the suspension. Not that it’s particularly good quality (I’d call it just decent), but it definitely helps add to the ride. Without it, I would have been riding much slower on trails. But thanks to the suspension, I was able to increase my speed without breaking my wrists or shaking my teeth out.

Again, it’s not going to win any awards in the quality department, but the perceptible front and rear suspension make a world of difference on rutted out or washboard terrain and helps smooth out broken asphalt or brick pavers as well.

When it comes to braking, I was actually surprised to see hydraulic disc brakes included on the Polarna M4. Keep in mind, we’re talking about a $1,399 e-bike here, and hydraulic brakes usually aren’t part of the deal at this price point. But somehow they managed to give us full-suspension AND hydraulic brakes, so that’s a win. I would have liked some larger rotors than the basic 160 mm discs that we got, but I won’t gripe too much there. Plus I’m loving those cast wheels they’re mounted to, so they managed to distract me with pretty spinning things.

Also included are a big utility rack and a set of fenders. Both of those improve day-to-day usage of the bike by adding extra utility.

They don’t do the weight any favors, and the Polarna M4 is a heavy bike at nearly 70 lb. But as long as you can lift it, those commuter-style accessories like racks and fenders are a big help.

Lifting the bike is probably going to be important though, since this is of course a folder. And that’s kind of the point – it folds up small to fit in a vehicle.

Instead of needing a bike rack on the back of your car, you could put the folded bike in a large trunk (assuming you can lift it).

The folding mechanisms are basic and commonplace, nothing fancy there. It folds at the handlebars and in the middle of the frame. That’s how 95% of folding e-bikes work and it’s just fine. It’s not space-age, but it works well. And it’s nice and sturdy, which is exactly what you want on a bike that you’ll be bouncing over berms all day.

The only downside to the folding aspect is that you are limited on battery capacity. The 615 Wh battery is acceptable, but not huge. I’d say that’s only slightly below average for e-bike battery capacity today.

The company claims you’ll get 45 miles of range, which is laughably optimistic. I was getting closer to 20-25 miles on throttle-only riding. Granted, I was riding pretty much full-out, but still. Don’t expect to get close to 45 miles unless you’re slowing down and adding some good pedal power.

Despite using throttle most of the time, I’d say the pedal assist is still quite comfortable. The eight-speed transmission is a welcome upgrade over the many single-speed moped-style fat tire e-bikes out there, so that’s another win. It also allows you to pedal fairly comfortably up to the bike’s top speed, which can’t be said for all e-bikes.

Even so, I definitely made liberal use of the throttle because it’s just so much fun to gun it on loose terrain like grass or dirt, treating the M4 like my own little folding dirt bike.

It’s not as powerful or rugged as a dirt bike, and the suspension of course can’t match, but I think it’s well specced for recreational use.

At this price, I’d say the bike gets two thumbs up from me, except that I’ve got one thumb nearly perpetually mashed down on that throttle!