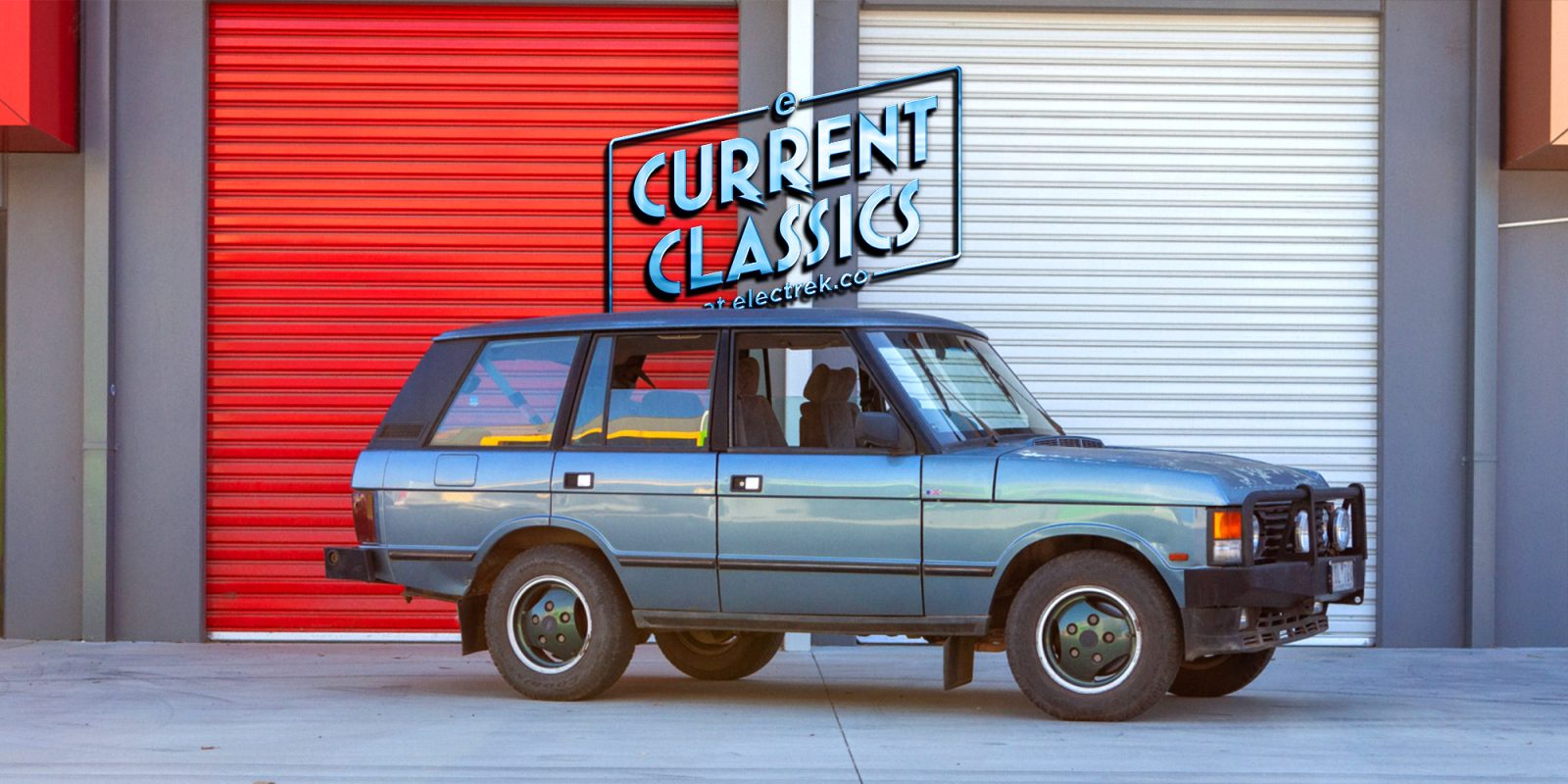 Range Rover was the original high-roller SUV. Without it, there would never have been a BMW, Mercedes-Benz, or – heck, even a Porsche SUV. And, yes, there is a 2022 Range Rover that sort of looks the part, but if you’re the type of person who feels like the simple elegance of its in-vogue ancestors has somehow eluded the 22’s designers, then keep reading. The guys at EVolution Australia may have just what you’re looking for.

The first-generation Range Rover had an almost inconceivably long product run, having been launched by the British Leyland corp. in 1969 and surviving that company’s restructuring into Land Rover Ltd. in 1978, the Range Rover was still in construction – and, arguably, at the height of its popularity – all the way into 1996. (!) And, like many fans of that first Rangie, the owner of this 1992 Vogue fell in love with the model on his family’s farm in Australia, where his family raised sheep.

That was a long time ago, however, and this Rover fan wanted something he could keep driving for years to come. In 2022, that can only mean one thing: electrification!

You need a plan

The car’s owner chose Australia’s EVolution / Electric Car Cafe (ECC) to freshen up the old Range Rover for the 21st century. Before rushing haphazardly into the build, they worked together to set out an engineering plan. Once they laid out their ideas and established a 150-200 km range goal (about 90-120 miles), it was time to get to work.

The first step? “Stripping out all the components she won’t need ever again anything that rumbles, leaks oil, or needs lots of maintenance,” reads the company’s build page for the project. “Naturally, you can’t put an electric driveline in without removing some greasy, oily, smelly stuff.”

Displacing the 3.9-liter V8 engine under the Range Rover’s hood bonnet is a custom-fabbed battery box housing lithium-ion battery cells sourced from a Renault Zoe. EVolution’s lead fabricator, Paul, is credited with designing the unit, along with new motor mounts. “(It) needs to be able to take a few knocks without allowing a breach into the cells themselves. If that occurs, bad things happen!”

The end result is visually clean and works to maintain something like the original weight distribution that the factory suspension and steering were designed to work with. But, while that sort of mechanical installation is a big part of the work involved in converting a classic, the real heavy lifting is in the tiny details.

That 44 kWh battery pack (above) feeds electrons to a NetGain Hyper9 electric motor that’s good for 173 lb-ft of torque. As finished, ECC exceeded its initial range goal, delivering approx. 220 km (about 135 miles) of range in summer driving – more than enough to keep the customer happy.

Lots more to be done

“The amount of work to integrate 21st century technology into this beautiful iconic shape is far from straightforward,” reads the company website. “The key word here is integration. All the new components must not only talk to each other, they must also communicate and work seamlessly with the original dials, knobs and levers that have been with the vehicle since 1992.”

There were also a few new features that had to be added to make this electric Range Rover a real, functional EV. The first few might be obvious – a charge port, a battery gauge added to the instrument cluster, a DC:DC converter to maintain the 12V battery and accessory systems. There’s one addition to this build, though, that would probably be overlooked by a conversion shop that doesn’t really “get” electric cars: heated seats.

EVolution / ECC recommends heated seats in every one of its electric vehicles it converts. That’s because heating a cabin consumes a lot of energy from the battery and cuts down on useful range. Heating the seats can provide similar levels of comfort for the occupants in a much more energy-efficient manner.

With everything installed and buttoned up, this classic 1992 Range Rover Vogue was ready to hit to hit the road – which brings us to another question. Why do this now, in the middle of a global pandemic and an ongoing supply chain crisis that is sure to jack component prices and shipping costs up into the stratosphere?

It was now or never

Building this ’92 Vogue EV is a bit of a “bucket list” item for the car’s owner, who is currently battling a terminal illness and wishes to remain anonymous. He always dreamed of owning a car like this and wanted a chance to enjoy it before he passed. It seems to have been a close thing, too. Even as the client had begun taking a new drug that stabilized his condition, delays caused by COVID and availability of parts pushed the build schedule back nearly two months.

It was a close enough thing that, in the event that he wasn’t able to see the project through to the end, he’d requested that ECC finish the project and assist his wife with the sale – but they came through, and the finished product hit the road for the first time late last week!

Drive (Australia) was on-hand to take photos of the electric Range Rover – the first of its kind on the continent – and they report that the customer was elated with the end result. The ECC team even “gifted” him with a few surprises, added during the unavoidable delays. The Vogue now offers satellite navigation, lane-keep assist, a rear-view camera, and keyless door locks – none of which were in the initial scope of the build.

The Drive team has been covering this build since the beginning and has a much more comprehensive set of build photos and galleries that gearheads will delight over. You can click here to see more pictures of the finished product, then follow the source links at the bottom of the page to see the rest of the shop photos.

I first fell for these Range Rovers in Costa Rica, where they served as something of a status symbol in a place where the sort of Jeeps and pickup trucks that we take for granted in the US don’t really exist. I imagine these cars occupy a similarly warm place in the ’92 Vogue owner’s heart, and I’m glad he was able to experience it while he had the chance.

Also, kudos to Drive for sticking with the project to the end. I’ll admit that it was on my radar as far back as June of last year, but I purposely avoided it. I was sure this story was going to end as so many stories seem to end these days – as a sad reminder that life is often too short, and that we rarely get the things we really want. Every once in a while, I love being wrong.