CycleBoard Rover review: A strange yet exciting mashup of an electric scooter and a skateboard 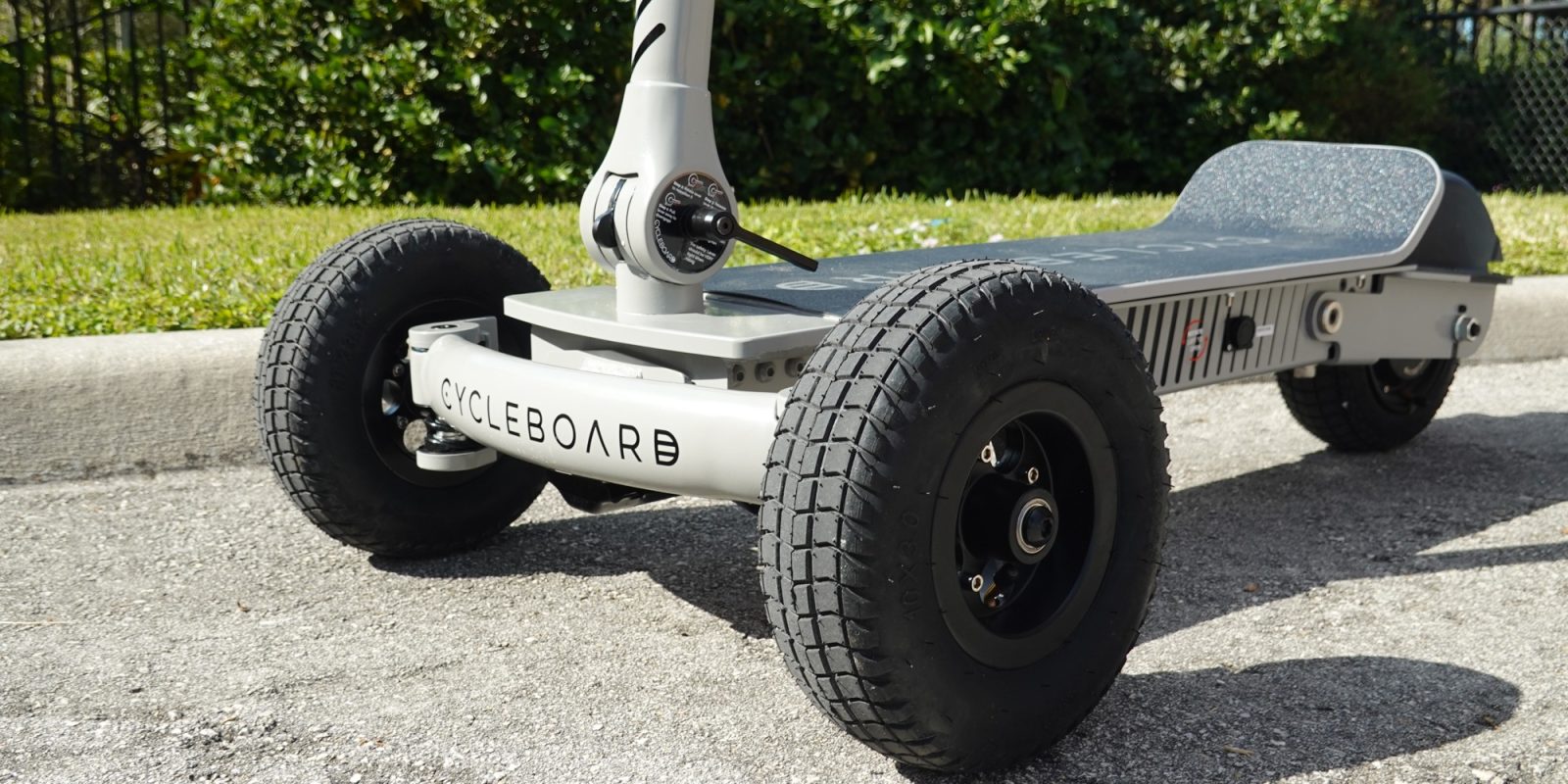 The CycleBoard Rover is unlike anything I’ve tested before. It looks like a scooter and handles more like a skateboard. It’s a wild ride that is hard to describe, but that’s what I’m here to try and do.

Having tested plenty of electric scooters and e-skateboards before, I thought I could just hop on the CycleBoard Rover and blast away.

But I was woefully underestimating the learning curve here.

The handlebars don’t actually turn like they do on a scooter, so you have to steer it by leaning your body as if you’re on a skateboard.

That took some getting used to. But once it clicked in my brain, it was definitely a fun ride.

You can see what this odd three-wheeled EV looks like to ride in my video review below. But don’t stop there! Keep on scrolling afterwards for the rest of my review.

Once you wrap your brain around how to control the Cycleboard Rover and it becomes intuitive, you finally get to open it up. And boy is it chomping at the bit, raring to go!

The 1,800W motor is extra powerful, and in fact was probably more power than I needed. As a new rider, I didn’t find myself using highest of the five power levels very often. But for seasoned riders, there’s plenty of power to make all sorts of questionable decisions on this thing. I can absolutely see someone flying through the air – it’s got launching power if you’ve got a good ramp to match it with.

In fact, I’d say it has more “go” than it has “stop,” in that the single rear brake isn’t as powerful as I’d like. It’s a hydraulic disc brake, and there’s also regenerative braking, so theoretically it’s plenty strong. But the physics of rear-wheel braking means that it can never provide as much stopping power as front brakes since most of the vehicle’s weight shifts forward when the brakes are applied. You come to a stop just fine, but three-wheel braking would cut a few feet off the stopping distance.

There may not be three-wheel braking, but you do get three-wheel suspension. It’s not particularly long travel suspension, but it’s better than no suspension. The effect is that smaller bumps don’t get transferred up through your ankles and wrists, but it’s not plush suspension by any means. Hitting a big bump is still a doozy.

Taking bumps at an angle is a bit of a doozy, too. When I’d pass over street gutters and other irregularities at an angle, I had to make sure I was going quick enough to not let the front wheels start bump-steering. I started making a note to tackle any tricky sections head-on, which seemed to work best.

A nice feature of the Cycleboard Rover’s trike design is that you don’t have to put your foot down at stops for stability. You can just stay on the deck, unlike a typical scooter. However, the Rover has to be moving in order for the throttle to work, so when the light turns green you’ll still have to put a foot down to give it a kick.

As much fun as the CycleBoard Rover is, I’m not exactly sure who the audience is here. It’s not what I’d call a commuter vehicle, at least not in the portable electric scooter sense. The Rover is heavy and wouldn’t be my ideal ride for carrying onto a subway car. An electric scooter or an e-skateboard would be the more convenient alternative there – not a mashup of the two.

Sure, it folds for easy storage. And that probably makes it’s easier to put in the trunk of a car, too. But the 83 lb. weight means it’s not easy to just pick up and toss around, even when folded.

And when it comes to nimble urban navigation in a bike lane, I’d probably prefer a lighter electric scooter there, too. I just don’t feel like I can weave around obstacles quite as easily on the Rover, though maybe that’s because I’ve spent years on traditional leaning two-wheelers.

At its top speed of around 25 mph (I never actually hit the 27 mph speed from the spec sheet), the Rover is certainly a thrill. But I also don’t feel the same stability as when I’m on a bicycle hitting those speeds. And so if my goal was getting somewhere fast, I’d probably elect for another form of electric micromobility.

That leaves recreational riding, which is where the CycleBoard Rover seems to shine. That’s just my opinion, and maybe there are people who replaced their car with this thing. But I’m guessing it’s more commonly used for joyriding. And it definitely puts the “joy” in joyriding!

That type of use makes sense to me. It’s powerful and it’s got a giant battery pack; both of those are necessities for long, open-ended cruises in your local stomping grounds. But as much fun as it is for that type of riding, its $2,599 price means you have to really want an odd-ball vehicle like this.

It’s totally different and thus offers a totally different ride style. And that’s going to be attractive to a lot of people. But you’re going to pay handsomely for that innovation, not to mention the high power and long-range features of the Rover.

So as fun as it was to test, I’m not sure I’m going to be shelling out for one to ride to my local coffee shop any time soon. But for a wild ride on something truly unique, this is definitely the ticket.